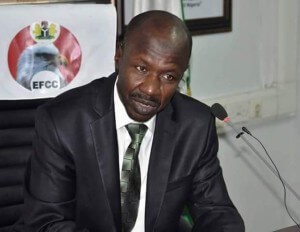 President Muhammadu Buhari has informed the Senate that the Acting Chairman of the Economic and Financial Crimes Commission, EFCC, Mr. Ibrahim Magu, and the Secretary to the Government of the Federation, SGF, Babachir Lawal, have been cleared of alleged corrupt practices following an investigation into allegations against them.

In a letter read during plenary on Tuesday by the Senate President, Bukola Saraki, which re-nominated Magu as Chairman of the EFCC, the President said Magu and Lawal were cleared of corruption in a report by the Attorney General of the Federation, AGF.

‎Buhari, in the letter, requested the upper legislative chamber to reconsider its decision to reject the appointment of Magu as substantive chairman of the EFCC.

Saraki read the letter after the Senate returned from a closed session that lasted about 80 minutes.

The Acting President, Prof. Yemi Osinbajo had sent the letter to the Senate on Sunday evening.

The Senate on December 15, 2016, rejected the appointment of Magu as EFCC chairman, citing a security report from the Department of State Services, DSS.

In the report, Magu was accused of living in a house paid for by a “corrupt” businessperson. He was also accused of extorting money — through a proxy‎ — from suspects.

Last December, the Senate recommended the sack of Lawal for alleged corruption.

After investigating the diversion of funds for internally displaced persons in the Northeast, the Senate Ad-hoc Committee, in its report, accused Lawal of receiving a kickback of N200m through his company, Rholavision Limited, from a company he awarded a contract for the clearing of invasive plant species in Yobe state.‎

Following this, President Buhari directed the AGF, Abubakar Malami, to investigate the allegations. Malami recently submitted his report at the end of the assignment.

‎In the case of the SGF, the President dismissed the document as a “minority report,” saying that the Senate committee comprised nine members” but only three persons signed it.‎

‎“The review of the interim report showed that only three members signed the report. ‎This makes it a minority report of a Senate committee,” he told the senators in his letter.

‎Buhari maintained that the SGF was not given the opportunity to clear himself of the allegations and that the company linked to him was not accorded the chance as well.‎

‎“The current report does not meet the principle of fair hearing‎ required in cases of abuse of office by the public officer,” he said.‎