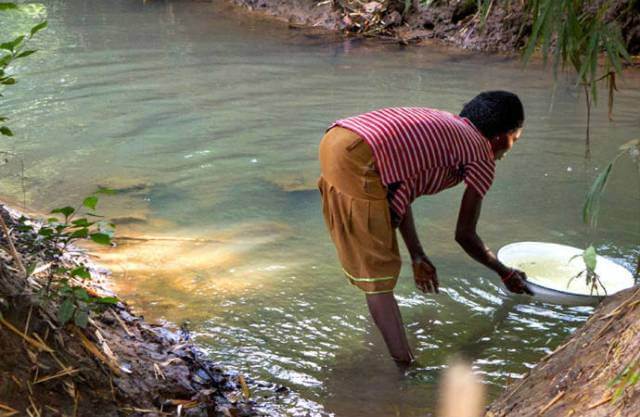 The stench hanging in the air was terrible; naked children running around looked like they needed urgent medical attention; flies buzzing on adults and children alike could make anyone want to turn back from the sour sight at Kwalita, a community thousands of miles away from civilization.

With about 56 minutes’ drive to Gwagwalada, the nearest point of access to all forms of social amenities, healthcare and education by these villagers is a town called Dobi, 38 minutes’ drive away.

On a bumpy ride from Dobi to kwalita, Caracal Reports had discovered that aside the rough terrain; villages in that environment all suffer the same fate including gully erosion during the rainy seasons.

With a small population of no fewer than 400 adults and children, these villagers do not have access to portable water, electricity, healthcare facilities, telecommunication, or quality education.About six villages to and after Kwalita survive on stream water, which could easily pass as urine with lots of particles unlike portable water, which is usually clean and colorless.

About six villages to and after Kwalita survive on stream water, which could easily pass as urine with lots of particles unlike portable water, which is usually clean and colorless.

Visiting the stream, Caracal Reports discovered not only was it a source of water for domestic usage including cooking and drinking, but it was also home to cattle, fish, frogs and a host of other impurity agents.

One may wonder how the spokesman in the village, Peter Ikyobo and his family, natives of Guma Local Government Area of Benue state, found himself here as the only person who understands English language.

Narrating the ordeals of the villagers to Caracal Reports, he lamented that the federal government through the FCT administration has abandoned them by not making available provisions to social amenities to ease their suffering.

According to him, the villagers suffer most during the rainy season especially after a heavy downpour, which makes it impossible to go out or come into the village adding that lives are lost during this period due to infections resulting from contaminated water.

Ikyobo said: “I have lived here for long, the water we take here is not the kind of water we should take. We are here but the area council does not know us, they know us only during elections and the water that we drink is not safe.

“During rainy season our children die from ailment because we don’t even have access to any form of health facility. There is nothing here we are just here if government can help us we will thank God. I had to go out to gain quality education before coming back to meet my family because we don’t have schools here. You can’t find up to four people here who have attended secondary school. We only have a primary school not very close by but during the rainy season when the road is rough, the teachers do not come regularly to teach our children but hence they keep the primary school they manage and come here sometimes. Our market is at Dobi, also if we want to go to the hospital, buy drugs from pharmacy or do any other thing, we have to go there,” he lamented.

When asked about access to transport facilities, Ikyobo explained that in the absence of vehicles, which run once a week on market days, they spend so much. “It is just as if we do not exist, buses do not come here at all except on market days which happens once a week and we pay N400 just to Gwagwalada. Other days we have to pick bike to Gwagwalada for N700. It is too expensive so we hardly go out”

The primary occupation of the people is farming of yams and production of firewood logs, which are sold to firewood wholesalers and retailers.

One of the clients, Hamza Abdulmalik, said that “I come here, other people also come this far to buy logs of firewood in bulk at a very cheap rate, we break some when we get back to Gwagwalada and sell to big restaurants and people who want to cook for an occasion.

“The people here are suffering too much, there was a time they were urinating and passing out blood in their faeces . If I am FCT Minister, I won’t put my money here instead, I will get a settlement for them close to civilization but they can have just their farms here” Abdulmalik advised.

Recently, a Non Governmental Organisation, Green Matters, donated 200 water filters to the villagers to ensure they have portable water to reduce cases of infection resulting from contaminated water; however, this is not enough.

However, Mr. Ishak Kara, Supervising Councilor for Education Gwagwalada Area Council, has stressed that the community had benefited from water infrastructures such as borehole, put in place by the area council.

He maintained that any water related programme initiated at this point would be to ensure the people have safe drinking water.

Kara said: “It serves as a wakeup call and reminder to our responsibility as a government at the grass roots to step up our presence in the areas of provision of social amenities in our communities”.