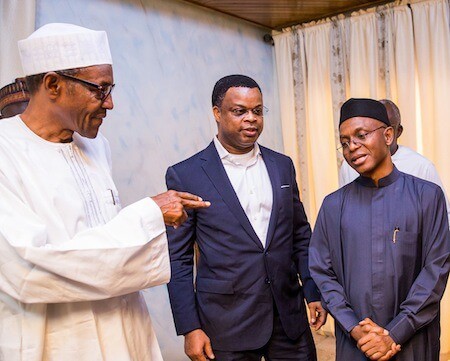 A dye-in-the-wool loyalist of President Muhammadu Buhari seems to be losing sleep over the political future of Africa’s supposedly largest economy – Nigeria.

Mallam Nasir El’ Rufai the governor of Kaduna state in North West Nigeria in a blunt letter to President Buhari, pointedly suggested a surgical operation on the entire gamut of government, to avoid the All Progressive Congress (APC) government leaving Nigeria worse than it met it about 18 months ago.

A September 22, 2016 letter which only went viral a few days ago, saw El Rufai warning the president about the composition of his “kitchen cabinet “which he succinctly described as being the albatross of the current administration.

In a sharp irony, most of the issues raised by El-Rufai, in the letter to his boss were issues that had been raised before by notable Nigerians, including the President’s wife, Aisha Buhari and Senate President, Bukola Saraki.

The president’s wife in the face of cultural and religious condemnations had raised the alarm that her husband was not in charge; instead, persons who did not know how the elections were won and lost had taken control of government. Whereas she did not mention names, El-Rufai was blunt, as he listed specifically, the Chief of Staff to the President, Abba Kyari and the Secretary to the Government of the Federation (SGF), Mr. David Babachir Lawal, as constituting a clog in the wheel of the progress of the APC-led administration.

“There is a perception that your ministers, some of whom are competent and willing to make real contributions, have no clear mandate, instructions and access to you. Ministers are constitutional creations, Mr. President, and it is an aberration that they are expected to report to the Chief of Staff on policy matters.”

“There is a strong perception that your inner circle or kitchen cabinet is incapable, unproductive and sectional. The quality and the undue concentration of key appointments to the North-East and exclusion of South-East are mentioned as evidence of this,” he said.

The diminutive governor also lambasted the president for neglecting his co-contestants in the party in the build up to the 2015 presidential elections.

“Mr. President, Sir, your relationship with the national leadership of the party, both the formal (NWC) and informal (Asiwaju Bola Tinubu, Atiku Abubakar, Rabiu Musa Kwankwaso), and former governors of ANPP, PDP (that joined us) and ACN, is perceived by most observers to be, at best, frosty. Many of them are aggrieved due to what they consider total absence of consultations with them on your part and those you have assigned such duties. This may not be your intention or outlook, but that is how it appears to those that watch from afar. This situation is compounded by the fact that some officials around you seem to believe and may have persuaded you that current APC State governors must have no say and must also be totally excluded from political consultations, key appointments and decision-making at federal level. These politically naive ‘advisers’ fail to realise that it is the current and former state governors that may, as members of NEC of the APC, serve as an alternative locus of power to check the excesses of the currently lopsided and, perhaps, ambivalent NWC. Alienating the governors, so clearly and deliberately, ensures that you have near-zero support of the party structure at both national and state levels.”

On government performance so far, he said: “In very blunt terms, Mr. President, our APC administration has not only failed to manage expectations of a populace that expected overnight ‘change’ but has failed to deliver even mundane matters of governance outside of our successes in fighting Boko Haram insurgency and corruption.”

Going forward, El Rufai believes that if the president must make a difference, he must get someone, with the technical-know-how to function as his Economic Adviser.

“Appoint a high profile Economic Adviser and constitute a two-level economic team – political level chaired by the VP and technical level consisting of key economic agency heads to do the more detailed technical analysis and present options for decision and action,” he advised.

He suggested that the president makes a U-turn in some of his policies, which are being perceived as anti- people and is gradually eroding his popularity amongst the citizens.

“These troubling perceptions, whether accurate or not, must be addressed frontally by you, Mr. President, and no other person,” adding that the president has both a crisis and opportunity in his hands “to turn around our country in the right direction.”