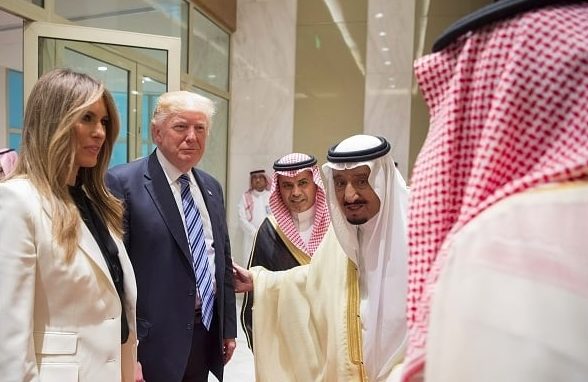 Trump is at the final leg of his eight-day trip abroad. Despite embarrassing himself (and America) with his controversial speeches, moronic statements, and weird body language, the trip has largely been a reprieve for the President and advisors who face insurmountable problems back home.

The President’s trip abroad started when he was greeted in Saudi Arabia with a grandiose and elaborate welcome. Disembarking from Air Force One at King Khalid airport in Riyadh, the President walked onto a red-carpet (literally) and he was paraded with a military brass band and fighter jet flyover. As someone who has built gaudy hotels and feeds on large-scale adoration, the welcome spectacle was perfect for Trump.

But Trump has once-again displayed his incompetency and disregard for American foreign policy while on his trip to the Middle East. The President gave a free pass to a country that evades and deflects from its role as a central supporter of terrorism and a fundamental, radical version of Islam.

Trump’s utmost ignorance continued when he traveled from one Middle Eastern country, Saudi Arabia, to another, Israel. But for Trump, this wasn’t the case, stating upon arrival that he “just got back from the Middle East”. If things couldn’t get worse, Trump revealed that the source of the classified information he casually disclosed to the Russians during a closed-door meeting was from Israel.

What was perhaps most stunning of all, though, was Trump’s shocking disregard and disloyalty of our closest allies in Europe. Reminiscent of Trump’s cringeworthy and disrespectful inauguration speech, he berated our allies for not paying their fair share in the NATO alliance, as if NATO was one of his country-clubs.

Needless to say, Trump’s first foreign abroad trip as President was a win according to him (no surprise) and an utter embarrassment for America and the antithesis of our foreign policy.

Trump left the U.S. for Saudi Arabia while news broke that former FBI Director James Comey has agreed to testify before the Senate Intelligence Committee.

The President will be returning to the U.S. with even worse news. Last night the Washington Post revealed that Trump’s senior advisor and son in law Jared Kushner had asked Russian Ambassador Sergey I. Kislyak to set up a secret, back-channel communication using Russia’s intelligence systems. The request even took Kislyak by surprise.

The revelation is probably one of the most ground-breaking news thus far, particularly because Kushner is so close to Trump. What this means is that not only is the Russia investigation heating up, but also that we are closer than ever to implications of collusion between Russia and Trump directly; which, if found to be true, is espionage.