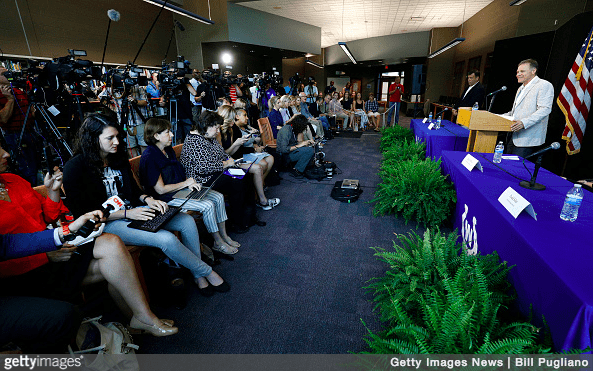 American college student Otto Warmbier was freed from North Korea this week, after he was imprisoned last January for allegedly stealing a propaganda poster. He was sentenced to fifteen years in prison and hard labor, after being accused of committing a hostile act.

According to a statement released by the North Korean news agency, Warmbier was freed on humanitarian grounds.

Warmbier’s family was told that he had been diagnosed with botulism soon after his trial, and had been given a sleeping pill which had led to his coma. He has allegedly remained comatose since.

Warmbier’s father, Fred Warmbier, says that the family does not believe these claims. He told reporters, “Even if you believe their explanation of botulism and a sleeping pill causing the coma — and we don’t — there is no excuse for any civilized nation to have kept his condition secret and denied him top-notch medical care for so long.”

In a press conference today, doctors at the University of Cincinnati Medical Center (where Warmbier is being treated), stated that Warmbier showed no signs of botulism and suffered extensive brain damage.  Dr. Daniel Kanter told reporters that Warmbier, “shows no signs of understanding language or responding to verbal commands,” and has not “engaged in any purposeful movements” since arriving in the United States on Tuesday night.

While doctors would not speculate on the causes of Warmbier’s condition, they did note that based on images taken in April of 2016 that the injury probably occurred in the weeks before, and that his current condition was consistent with cardiopulmonary arrest.

Officials charged with negotiating for the release of Warmbier and another detained American were told they were being treated as prisoners of war. Last month, North Korea’s ambassador to the United Nations secretly met with Joseph Yun, the State Department’s special representative for North Korea. It was at that point that Yun was allegedly informed of Warmbier’s condition. On Monday, Yun arrived in Pyongyang, and insisted on Warmbier’s release, to which the North Korean authorities agreed.