In an attempt to retain power, Theresa May funds lavish flight and £1 billion deal to the DUP 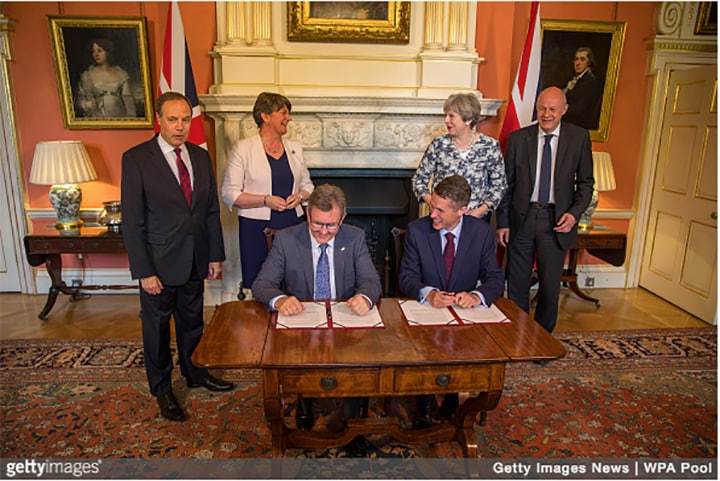 Earlier in the week, Theresa May negotiated an agreement that would keep her in Downing Street for the foreseeable future. The agreement would see May effectively keep the majority she once held in parliament by negotiating with the Democratic Unionist Party (DUP) of Northern Ireland. The agreement sees the DUP vow to support May’s Conservative party in key Parliamentary votes. However, the support of the DUP comes at a rather steep price.

The Democratic Unionist Party is said to be receiving the sum of £1 billion of funding for Northern Ireland, which come on top of the £500 million the six-county country would normally receive. here are also policy stipulations regarding a “triple lock” of state pensions, and a departure from some conservative manifesto pledges. These stipulations are all in exchange for pledges to align votes with the conservative party on some major pieces of legislation.

Given the tumultuous nature of the most recent parliamentary election, which ended with Theresa May’s loss of an overall majority by a mere eight seats, some press in the UK is viewing the negotiations and subsequent agreement to be nothing more than a desperate bribe on the part of May to cling to power. The Independent summed up the deal, stating, “If the Tories had given every non-Tory voter £50, it would’ve cost £70m less than the DUP deal.” In other words, if May wanted to just buy a majority of seats, there were much cheaper ways to go about it.

The optics for Prime Minister May’s deal get even worse when you consider that during the election campaign, the issue of spending was one of the major points of contention between May’s Conservative Party and the Minority Labour Party. Conservatives, or Tories as they are colloquially called, repeatedly attacked the opposition Labour Party over its spending pledges. Senior conservatives, including May, grew very fond of using the adage: “There is no magic money tree we can shake that suddenly provides for everything that people want.” Yet there is apparently a tree with £1 billion on it for a deal with the DUP.

Moreover, conservatives have also recently pledged to cap public sector pay, meaning yearly salaries for jobs like the fire service, teachers and police could be capped, and Prime Minister May is championing it. When considered along with the £1 billion agreement, the optics become even worse for Theresa May.

Though the £1 billion agreement has already been made and May retains the finest government housing in Britain(short of Buckingham Palace) the effects are far reaching and only still beginning. Anti-Tory protests have begun, with some 9,000 people marching on Parliament to call for May’s resignation. If eight seats in Parliament is worth £1 billion to Theresa May, how much is her own worth?

Most recently it was reported that May arranged for Arlene Foster, who is the leader of the DUP, to be flown back to Belfast in a luxury flight that cost £200,000. Jeremy Corbyn, the leader of the Labour Party who recently gained an unpredicted win of 31 seats in Parliament condemned the extravagant spending, calling it a “shoddy bung”.Corbyn continued to say that, “This is a shoddy bung to shore up a Government that has lost its mandate”.

Conservatives responded to the criticism by saying that it was meant to “conclude the signing of the Confidence and Supply agreement between Conservative Party and the Democratic Unionist Party which will provide the UK with the stable Government it needs at this critical time”.