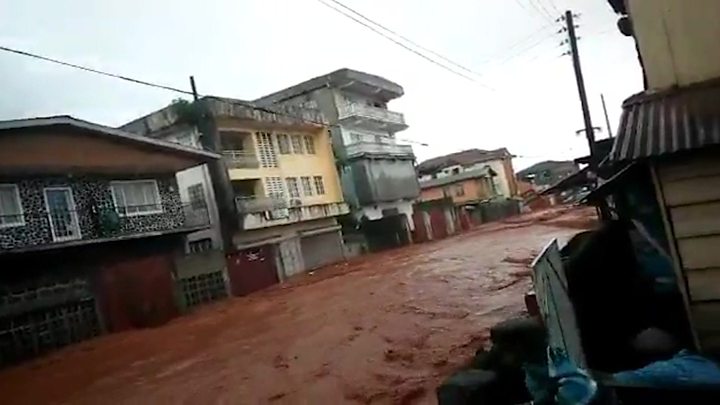 The nation of Sierra Leone has been rocked by a severe mudslide, leaving at least 300 people dead in the capital Freetown. According to NBC News, the mudslide, coupled with heavy rains and flooding have devastated the nation, as the Red Cross fears some 600 souls to still be missing. Bodies were still being found Tuesday as more washed up on the beach. Workers and loved ones have also continued searching for survivors amid the chaos. Authorities have indicated that several hundred people were buried under tons of mud while they slept.

The sheer number of deceased have found the morgue and coroners unprepared. According to The Independent, Sinneh Kamara a coroner technician at the Connaught Hospital mortuary said: “The capacity at the mortuary is too small for the corpses.” As the morgue overflowed with bodies, the search continued for potential survivors, and Kamara urged for more ambulances to be dispatched. Kamara pushed for the health department to locate and send more ambulances as his mortuary had only four. The overwhelming of the mortuary has left the number of dead incalculable at the moment, but it could still grow as more bodies and survivors are found beneath the debris.

Military personnel have been deployed in an attempt to aid the rescue operation. Volunteers and workers dug throughout the night with their bare hands in a desperate attempt to find survivors, loved ones beneath the devastation. Many of the areas close to the Sierra Leone capital are impoverished and suffer from poor drainage systems. This, coupled with their relative proximity to sea level have only exacerbated flooding during the countries rainy season.

According to the NBC News report, Abdul Nasir, program coordinator for the International Federation of Red Cross and Red Crescent Societies, stated: “I have never seen anything like it, a river of mud came out of nowhere and swallowed entire communities, just wiped them away. We are racing against time, more flooding and the risk of disease to help these affected communities survive and cope with their loss.”

Nasir told The Associated Press that an estimated 9,000 people have been affected by the natural disaster. The Sierra Leone National Broadcasting Corp. showed the harrowing footage of people carrying their loved ones to the morgue in rice sacks. Thousands of makeshift settlements in and around Freetown were affected, and some decimated in the chaos.

According to NBC News, Freetown was particularly affected by their unregulated construction of large residential buildings in hilltop areas. “The government has been warning people not to construct houses in these areas. When they do this, there are risks,” Nasir said. “People don’t follow the standard construction rules, and that is another reason that many of these houses have been affected.”

Some 2,000 people in the country are now homeless, as the humanitarian aspect of the crisis begins to take shape. The disaster also has other implications such as disease, according to NBC News, Government spokesman Cornelius Deveaux stated: “Contingency plans are being put in place to mitigate the outbreak of disease like cholera.”Given the severe flooding, there is a possibility of the growth and spread of waterborne diseases, such as cholera.