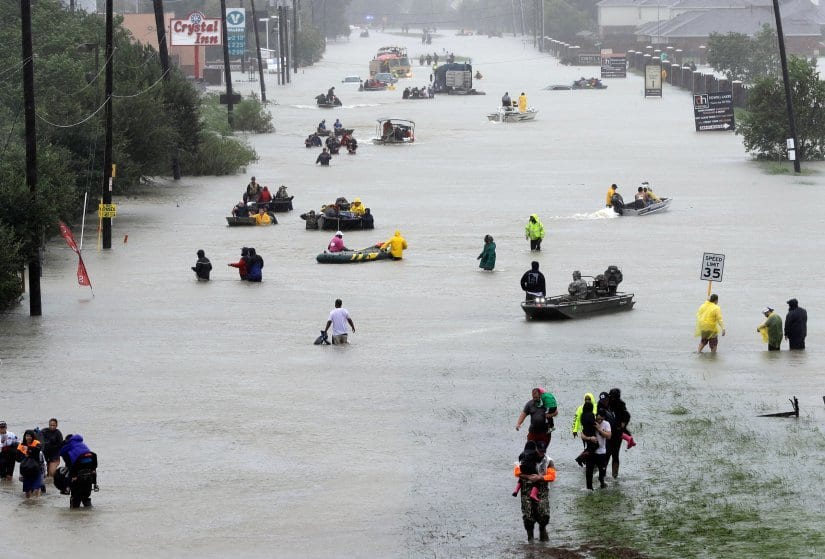 Hurricane Harvey has made landfall in Texas, where the residents have prepared for the worst. In what many are describing as the worst storm to hit the US in a decade, residents faced harsh winds and some severe flooding. Fourteen people have already been confirmed dead due to the storm. Meanwhile, 450,000 people have been directly affected by the deadly storm. The category 4 hurricane first struck Texas. Since making landfall, the storm has been downgraded to a tropical storm.

When it first struck land, Harvey had winds as fast as 130 mph. Despite since being downgraded, the storm has stalled over Texas, which has only exacerbated the initial flooding and destruction. Even as a tropical storm, Harvey has still caused considerable destruction. The weather service has indicated that the storm could remain over Texas as a tropical storm until Wednesday before weakening further.

Houston’s population of 6.6 million people have already been struck by severe rains. In the city alone, some 30 inches of rain has fallen in just the past 24 hours. At least 2,000 people have already had to be rescued as local authorities in Houston advised residents to take shelter in their homes, rather than evacuate. Power outages have also affected the city as at least one hospital has been closed and evacuated.

Since its initial landfall, Harvey has decimated parts of Texas, including and especially Houston. America’s fourth largest city was known to be flood-prone leading into the hurricane, and yet the city was not evacuated. Houston Mayor Sylvester Turner, in fact, advised people in the area to remain in their homes, fearing that such a mass evacuation would create a “nightmare.”

The fear of such a nightmare, was perhaps due in part to the tragedy of Hurricane Rita in 2005. Just weeks after Hurricane Katrina levelled New Orleans, Rita hit Southeast Texas. An evacuation was called for, but the result was thousands attempting to flee at once. The sheer number of people attempting to evacuate caused mass gridlock, as well as a deadly bus accident, which killed 20 people.

The devastation to Texas, and the Houston area can not be overstated, as some believe roughly 30,000 people could be left homeless or displaced from the storm. In addition to the two people that have already died, the expectation is for that number to grow. Once the rain finally dies down, and the flooding eventually recedes, the number of deceased could rise dramatically. Moreover, the destruction to homes, buildings and memories can only be fully seen once the storm and flooding die down.

Texas Governor Greg Abbott pre-emptively declared a state of disaster on Wednesday last week for 30 counties. Roughly 700 members of the National guard were mobilized as well before the storm made landfall. As recently as Friday, Governor Abbott urged all residents who remained in the storm’s path to evacuate immediately.

Experts have further indicated that the storm could last for five days, with some parts of the state potentially being hit twice. Around the Houston area, and parts farther inland could contend with the storm heading back into the Gulf of Mexico, before coming back as another storm. Flash-flood warnings are in effect throughout the state, as some believe there could be some three feet of rain drenching Texas.