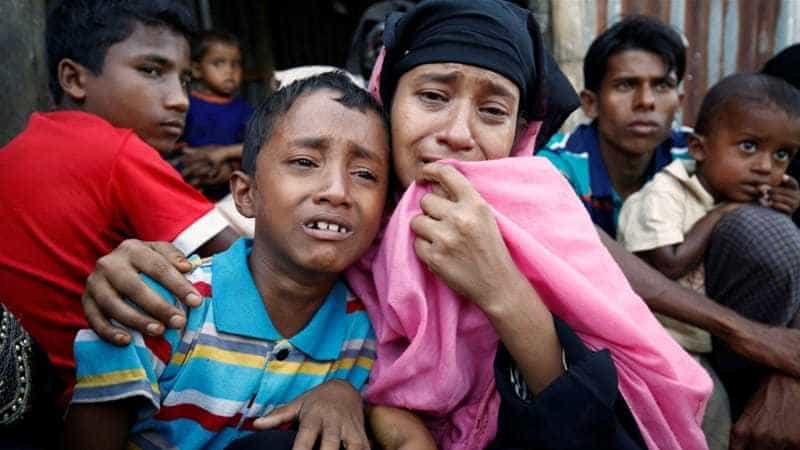 Share
Posted: September 17, 2017 at 2:40 pm   /   by Conor Baker   /   comments (0)
tags:
After fleeing violent persecution in Myanmar, Rohingya refugees face a new problem in Bangladesh. Refugees could starve to death amid the burgeoning humanitarian crisis. With nearly 410,000 Rohingya Muslim refugees, there is simply not enough food, water or shelter for every person. Women and children are dying from stampede as they struggle to get food. The Rohingya Muslims are the minority in the Buddhist-dominated Myanmar. The Rohingya refugees were forced to flee a violent military offensive in their home country, amid what the United Nations has called “a textbook example of racial cleansing.”

Multiple charities are at work in Bangladesh, attempting to aid the refugees. Mark Pierce, Bangladesh country director of the Save the Children Charity, said “Many people are arriving hungry, exhausted and with no food or water. I’m particularly worried that the demand for food, shelter, water and basic hygiene support is not being met due to the sheer number of people in need. If families can’t meet their basic needs, the suffering will get even worse and lives could be lost.”

Bangladesh has received multiple influxes of Rohingya refugees over the past several decades, as Rohingya Muslims, found increased persecution in Myanmar. Before this latest crisis, about 400,000 Rohingya already called Bangladesh home. This, however, is no perfect solution, as in Bangladesh, they are reviled. Many people in Bangladesh view the Rohingya as illegal immigrants and are the targets of systematic discrimination.

Bangladesh’s government has committed to building thousands of more shelters to house refugees. This came after the United Nations Refugee Agency warned that previous shelters were “bursting at the seams.” However, the government has also restricted the movements of the Rohingya in the country. The refugees have been banned from leaving designated areas within the country. Fearing that refugees will attempt to move deeper into the country, police have limited the Rohingya movements to the camps designated to them.

The Save the Children charity estimated that the number of refugees could spike to more than one million by year’s end. Of those million refugees, an estimated 600,000 would be children. Many of these children would be “alone and in desperate need of help” and at risk of trafficking and exploitation. Some of the children who have already fled claimed to have seen the murders of their parents.

Human Rights Monitors, coupled with fleeing Rohingya have said that security forces in Myanmar and Rakhine Buddhist Vigilantes launched a violent campaign to drive out the Muslim minority from Myanmar. The attacks have taken multiple forms including villages being burned down. Amnesty International stated that the methods of the security forces are consistent with scorched-earth tactics, to drive out Muslims.

Many believe that the humanitarian efforts must be scaled up to deal with this ever-growing crisis. Mr. Pierce said: “That can only be done if the international community steps up funding.”

A message to the Whole World from a Rohingya Muslim. #Rohingya pic.twitter.com/HATCtcVce9