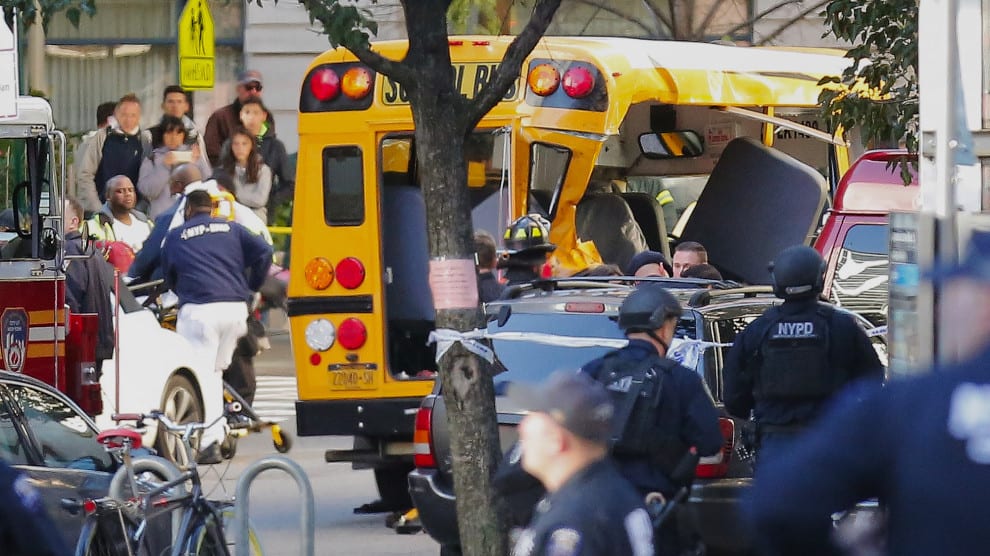 New Yorker’s out trick-or-treating seem marginally scathed tonight in the aftermath of the incident in lower Manhattan. The incident occurred earlier today when a truck struck pedestrians walking along the West Side Highway bike bath at Houston Street, killing 8 and injuring as many as 15, in what is now being investigated as an “act of terror.”

A male, driving a rented Home Depot to pick up truck entered the West Side highway bicycle path at Houston Street. At Chambers, the truck collided with a school bus injuring two adults and two children passengers.

He allegedly exited the truck brandishing two handguns. Officers from New York Police Department’s first precinct responded. The suspect was shot in the abdomen and is currently being treated for his injuries. He is expected to survive.

New York law enforcement agents identified the driver as 29-year-old Sayfullo Saipo from Uzbekistan. Authorities are saying he came to the United States in 2010.

Early reporting from the New York Times cited federal authorities are treating the incident as a terrorist attack; taking the lead in the investigation, a senior law enforcement official said. Two law enforcement officials said that after the attacker got out of the truck, he was heard yelling, “Allahu Akbar,” Arabic for “God is great.”

Mayor Bill de Blasio who spoke at a news conference said, “Based on the information we have at this moment, this was an act of terror and a particularly cowardly act of terror aimed at innocent civilians.”

Two law enforcement officials said the driver of the truck, a 29-year-old man who came to the United States in 2010, was in grave condition. One official said he had rented the truck in New Jersey. Authorities recovered a bb gun and a paintball gun.

John Williams, who arrived on scene 30 seconds after the gunshots started says he was walking north on the West Side highway when he saw two women with a group of children sprinting towards him. But as they passed him, one of the young girls says he had a gun.

Thirty-seconds to a minute later, Williams said he heard approximately five gunshots “back to back, really fast. Everything got to me; the smell of gunpowder really stuck out in my mind. Then I saw a man laying on the ground, he appeared to be in pain. I saw another man next to him; the police were putting him in handcuffs.”

Williams says he heard another officer claim another possible suspect had run into the park. “At that point, five to ten officers ran into the park looking for this person,” said Williams.

Rabbi Chaim Zakalos, the Director from the Chabad of Battery Park City, was escorting students home from a nearby school when someone approached him attempting to sell photos of the shot suspect. He was eventually able to get the students to safety.

Tire tracks could be seen on the bodies of those who were killed as reported on by eyewitnesses at the scene.

A large section of the West Side Highway was closed for the investigation as hundreds of officers, including the bomb squad, responded to the scene. The truck came to a rest near Chambers Street, facing eastbound.

Ramon Cruz, 27, said the driver appeared injured. Then Mr. Cruz said he heard someone yell, “He’s got a gun, run, run!” Cruz also stated he did not see any gun or any blood. “All I heard was the impact of the crash.”

Tonight NYPD rallies by adding to its police presence as the West Village Halloween Parade is set to continue. Heavy weapons teams are said to be lining 6th Avenue as well as blocker vehicles to prevent vehicular passage.