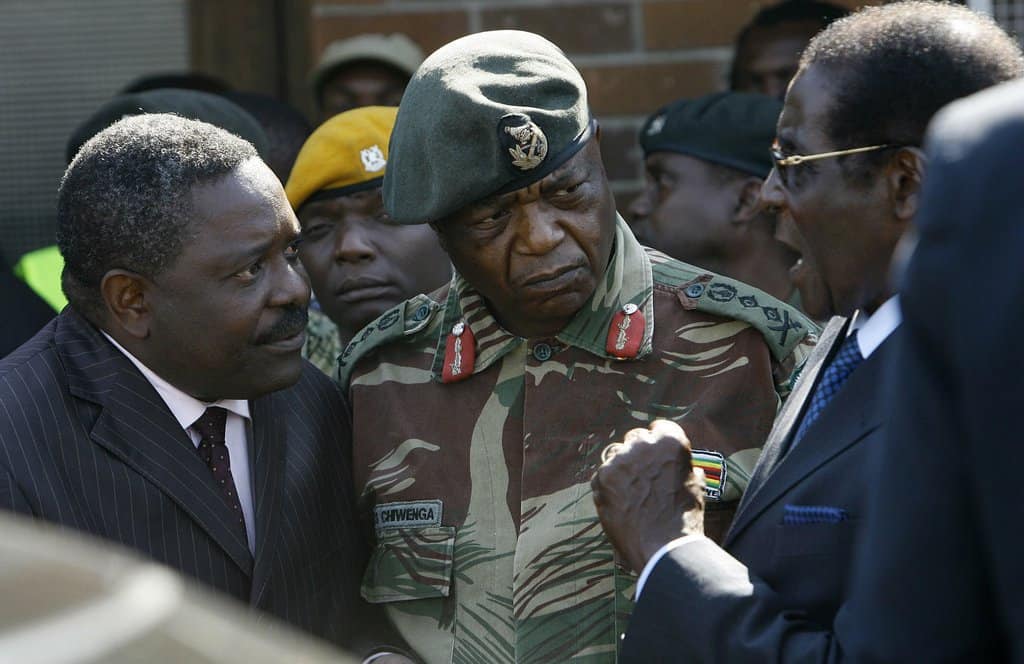 Zimbabwe President Robert Mugabe’s decade-long grip on power appeared to be over on Thursday as his main opposition rival; Morgan Tsvangirai returned to the country amid efforts to form a transitional government.

Tsvangirai, who had been receiving cancer treatment abroad returned to Harare after Wednesday’s military takeover, sources with knowledge of his movement said.

A senior member of Tsvangirai’s Movement for Democratic Change (MDC-T) party, said talks were underway with military leaders about an administration that includes the opposition, with the backing of key regional allies.

The arrangement is being described as a “done deal” but there was no indication on Thursday that Mugabe plans to go quietly. The 93-year-old leader, who is under house arrest in Harare, has not publicly made any statement since the military seized control.

Zuma, the chair of the South African Development Community (SADC) dispatched two envoys to Harare for talks and had called for a meeting in Botswana Thursday.

Kuzdanai Chipman, head of the Zanu-PF Youth league and key ally, apologized on state television after he had criticized the head of the armed forces earlier this week.

The streets of Zimbabwe remained quiet as tanks were seen at key intersections in the city Wednesday though they were few other signs of change in leadership.

Zimbabwe has been in limbo since the military seized control of the state institutions early Wednesday and placed Mugabe under house arrest.

Talks are said to be in place to engineer a peaceful exit for the veteran leader although it is unclear what role Tsvangirai would play in the administration. He served as Prime Minister under a power-sharing deal with Mugabe after a disputed election in 2008, but Mugabe regained full control in 2013 amid further allegations of election fraud.

The former Vice President, Emmerson Mnangagwa who was pushed out two weeks ago by Mugabe will be key in the transitional administration as he remains one of the most influential figures in the country and derives much of his support from the military.

Crucial to the issues at hand will be whether Mugabe is allowed to serve out the rest of his term as elections are due in 2018.

According to the South African Department of International Relations and Cooperation; two South African ministers arrived in Zimbabwe on Wednesday to meet with authorities.

The South African Development Community (SADC) called to form by Zuma; will be held in Botswana and will include foreign ministers and delegates from neighboring Angola, Tanzania and Zambia.

Despite the military’s armored vehicles throughout downtown in the capital, residents described the environment as “quite calm.”

“There are military tanks on the streets, which has never happened before,” said one Harare resident. “The military is obviously now in charge despite their insistence that it’s not a coup. It is.”

The US embassy in Harare on Thursday urged American citizens to remain calm and safe and “limit unnecessary movements.” It said that while the US government “does not take sides in matters of internal Zimbabwean politics,” it said the military’s actions deeply concerned it.

“We call on Zimbabwean military leaders to exercise restraint, respect the rule of law, uphold the constitutionally-protected rights of all citizens, and to quickly return the country to normalcy,” the embassy said.

Mugabe’s shock decision to dismiss his powerful deputy Mnangagwa last week seems to be the catalyst that set in motion Wednesdays’ military intervention; bringing to light the simmering succession battle in Mugabe’s ruling Zanu-PF party – further fueling speculation that he was preparing to hand over the government to his wife Grace, 52.

Mugabe, the only leader most Zimbabweans have ever known, ruled the landlocked county with an iron fist, after taking power at the end of British rule in 1980. He ordered violent crackdowns which extinguished political opposition that lead to a string of massacres in opposition strongholds. Of those campaigns of terror, it is alleged Mnangagwa carried them out when he was the country’s spy chief in the 1980’s.

A signal that Mugabe’s days of his rule were overcome when Zuma, a key ally, failed to condemn the military takeover, calling it restraint. “I am hoping that the situation is going to be controlled, so peace and stability come back to Zimbabwe,” he said.

Signals of a shift in alliances emerged later Wednesday when the head of the Zanu-PF Youth League,  Kudzanai Chipanga, a group that is a key ally of Grace Mugabe, apologized to the armed forces in a video broadcast on state broadcaster ZBC.

Earlier this week, Chipanga pledged to fight and die for Mugabe and criticized the head of the armed forces. But in his state TV statement, which he claimed to be made voluntarily, he recanted.

“I have since reflected, and I personally admitted that I erred together with my entire executive to denigrate your highest office,” Kudzanai Chipanga said Thursday. “I have not been persuaded to offer myself to the state media, but I have personally reflected and realized my mistake.”