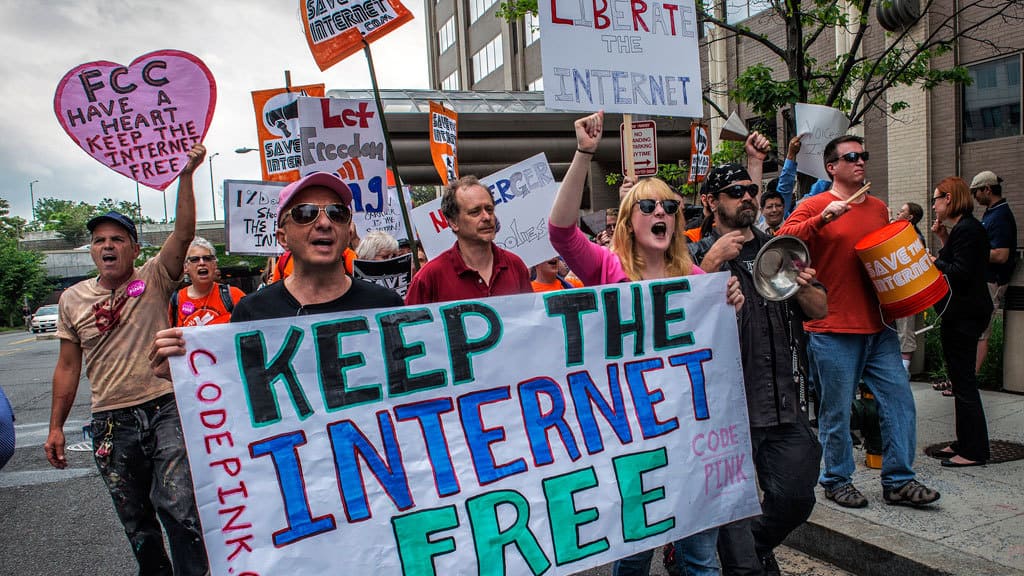 In a move that could allow giant cable and telecom companies to toggle broadband speeds and charge more as well as favor or block websites; the chairman of the Federal Communications Commissions set out to scrap rules around open internet access on Tuesday — an advance dismantling a landmark regulation set to ensure equal access to the internet.

Ajit Pai put forth a proposal to repeal “net neutrality” regulations enacted under the Obama administration. The current rules handle internet service providers such as; Comcast, AT&T, and Verizon as if they were utility companies which provide essential services, like electricity. The rules mandate ISPs give equal access to all online content and applications.

The action immediately reignited a loud and furious fight over free speech and the control of the internet, pitting telecoms giants like AT&T against intent giants like Google and Amazon, who warn against powerful gatekeepers. Both sides are anticipated to lobby forcefully in Washington in attempts to push their respective agendas, as they did when the existing rules were adopted.

“Under my proposal, the federal government will stop micromanaging the internet,” Pai said in a statement. “Instead, the F.C.C. would simply require internet service providers to be transparent about their practices so that consumers can buy the service plan that’s best for them and entrepreneurs and other small businesses can have the technical information they need to innovate.”

In preparation for a Dec. 14 vote, Pai, a Republican, distributed his plan to other FCC commissioners on Tuesday; promising to release the entire proposal Wednesday. Two of FCC’s Democrats said they would oppose the proposal. However, the repeal is likely to prevail as Republicans dominate 3-2. The vote for net neutrality in 2015 was along party lines, but Democrats dominated at the time.

Since the creation of the internet, equal treatment of all web traffic has been a cornerstone principle, but companies have increasingly impacted the scale of access. AT&T by way of example doesn’t  count use of its streaming service DirecTV Now against wireless data caps, potentially making it seem cheaper to its cellphone customers than competitive services. Rivals would have to pay AT&T for those privileges.

Some tech companies, consumer advocates, and regulators draw concern that repealing net neutrality will give ISPs, even more, the power to block or slow down rival offerings.

The action “represents the end of net neutrality as we know it and defies the will of millions of Americans,” said Michael Beckerman, chief executive of the Internet Association, a lobbying group that represents Google, Facebook, Amazon and other tech firms.

A repeal potentially also opens the ability for ISPs to charge a company like Netflix for a faster path to its customers. Allowing this paid priority market to exist could skew prices and create winners and losers among companies that require a high-speed connection to end users.

In a Fox News Radio interview, Pai said Trump did not have any input on his proposal. Asked whether deregulation would result in higher prices and put speedy internet access out of reach of blue-collar Americans, Paid said: “it’s going to mean exactly the opposite.”

“These heavy-handed regulations have made it harder for the private sector to build out the networks especially in rural America,” Pai said.

The plan to repeal the existing rules, passed in 2015, also reverses a hallmark decision by the agency to declare broadband as a service as essential as phones and electricity. That move created the legal foundation for the current rules and underscored the importance of high-speed internet service to the nation. It was put in place by Tom Wheeler, an F.C.C. chairman under President Obama.

A data firm called Emprata that was backed by a telecom industry group found in August that after filtering out form letters, the overwhelming majority of comments to the FCC — about 1.8 million — favored net neutrality, compared with just 24,000 who supported its repeal.

Among those that will be hit hardest are startups that depend on high-speed internet connections for growth, said Colin Angle, co-founder, and CEO of iRobot, maker of the Roomba robot vacuum cleaners. He said his own company wouldn’t be dramatically affected in the near term, but the nascent robotics industry overall might.

“The need for these robots to consume bandwidth is certainly on the rise,” Angle said.

Google said in a statement that net neutrality rules “are working well for consumers and we’re disappointed in the proposal announced today.”

Other tech companies were more muted, with some referring instead to their trade group, the Internet Association. Netflix, which had been vocal in support of the rules in 2015, tweeted that it “supports strong #NetNeutrality” and opposes the rules rollback.

But the streaming-video company said in January that weaker net neutrality wouldn’t hurt it because it’s now too popular with users for broadband providers to interfere.

AT&T executive vice president Joan Marsh said new rules requiring ISPs to disclose their management practices will keep them honest. “Any ISP that is so foolish as to seek to engage in gatekeeping will be quickly and decisively called out,” she said in a statement.

Comcast said its commitment to consumers will remain the same. “We do not and will not block, throttle, or discriminate against lawful content,” Comcast’s senior executive vice president David Cohen said.

“Your internet service provider will be free to make online fast lanes and favor the content of its choice,” said Gigi Sohn, a former senior adviser to Mr. Wheeler at the F.C.C. “That it will take away your control of your internet experience and give it to Comcast, AT&T, and Verizon.”