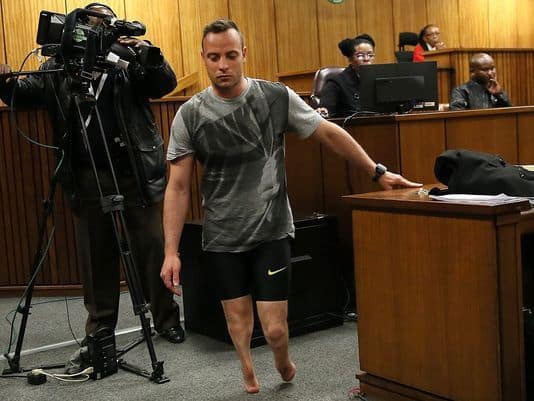 A Supreme Court of Appeal in South Africa on Friday increased the sentence imposed by a lower court on Oscar Pistorius over the killing of his ex-girlfriend, Reeva Steenkamp, in February 2013, from six years to 15 years.

Ms. Steenkamp, 29, a model and law graduate, and the double-amputee Olympic sprinter, had been dating for several months and became known as a celebrity couple.

After his initial trial in 2014, Pistorius, also known as the Blade Runner, was sentenced for manslaughter. The charges were later reversed on appeal to murder.

The Supreme Court of Appeal increased the sentence to 15 years and deducted the time he has already served either in prison or under house arrest. That means he faces 13 years and five months. The South African law sets 15 years as the recommended minimum for murder, but it can be lower if there are mitigating circumstances.

A panel of five judges ruled that Pistorius should have been sentenced to the 15-year minimum term. In a written ruling, the judges echoed the prosecutors’ assessment that the previous sentence was “shockingly lenient to a point where it has the effect of trivializing this serious offense.”

The ruling said that Mr. Pistorius “displays a lack of remorse and does not appreciate the gravity of his actions.”

It was not clear whether Mr. Pistorius’s lawyers planned an appeal to the Constitutional Court, the country’s highest tribunal.

However, Pistorius, who was not in court to hear the decision on his sentence, alleged that he had shot his girlfriend by accident adding that the four bullets fired through a bathroom door were meant for an intruder he thought had entered his upscale villa in Pretoria.

Rather, prosecutors said he had killed her in a jealous fury after an argument in the early hours of Feb. 14, 2013. “He would have recognized his girlfriend’s voice,” he said.

Like the prosecutor, the Steenkamp’s family spokesperson, Tania Koen, said, “The increased sentence had restored our faith in the judicial system. This is an emotional thing for them. They just feel that their trust in the justice system has been confirmed this morning.”

Meanwhile, a state prosecutor in the case against Oscar Pistorius, Gerrie Nel, made the case for a ‘long-term imprisonment’ for Mr. Pistorius during a hearing on Wednesday.

In July 2016, Judge Masipa handed down a six-year term for murder. She explained her seeming leniency by saying that Mr. Pistorius had shown genuine remorse in trying, albeit without success, to apologize in person to Ms. Steenkamp’s family. Many legal analysts had expected a lengthier sentence.

“I am of the view that a long-term imprisonment will not serve justice,” Judge Masipa said at the time. “He’s a fallen hero, who has lost his career and is ruined financially.”

Ms. Steenkamp died less than a year after the 2012 Olympic games in London, where Mr. Pistorius carried the South African flag at the closing ceremony.