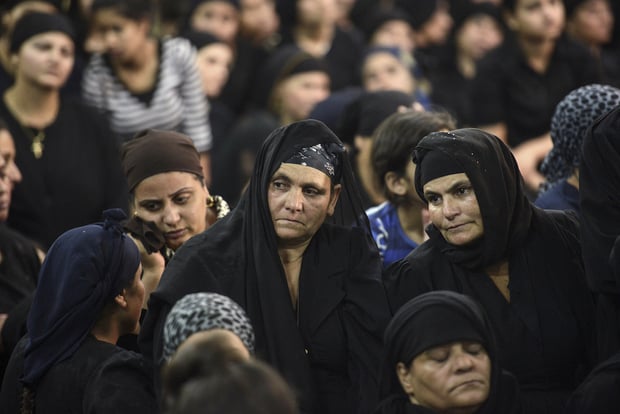 At least nine people were killed near the Egyptian capital of Cairo today, in a series of attacks on the country’s Coptic Christian minority.

Egyptian police say they saw two suspicious men standing outside of the Church of the Martyr Martina in the town of Helwan on Friday morning. When the police approached, the men opened fire. At least one policeman (Reda Abdel Rahman, age 45) was killed, along with one of the gunmen.

Egyptian state TV showed footage of the gunman who died. He was a bearded man wearing a suicide vest – which means that the attack would have been far deadlier if police hadn’t stopped the man before he could detonate his bomb.

About an hour after the attack, another gunman attacked a Christian-owned hardware store in Helwan. Two men – the sons of the store owner – were shot and killed.

Police had already been on high alert, anticipating attacks against Christians during the holiday season. Security barricades had surrounded the church in Helwan and there were police on guard.

Coptic Christians celebrate Christmas on January 7. Security around churches is expected to be even tighter in coming weeks. The Interior Minister ordered police to be stationed at the entrances and exits of churches and roads leading to churches. He also said police would set up metal detectors and search worshippers on their way into services.

No terrorist group has claimed responsibility for either attack so far. But in the past, ISIS has carried out vicious attacks on Christian sites in Egypt. .Last April, at least 45 people died when terrorists attacked churches in Alexandria and the city of Tanta on Palm Sunday. In May, terrorists attacked a bus carrying Christians to visit a monastery in central Egypt, killing at least 29 people. And in December last year, there was a deadly suicide bombing at a church in Cairo. ISIS claimed responsibility for those attacks.

In the past, Egyptian Copts have often accused the government of not doing enough to protect them from extremists. However, President Abdel Fattah Al Sisi enjoys the support of Egyptian Christians, who see him as a staunch opponent of extremist Islamist groups like the Muslim Brotherhood.

After today’s attack, President Sisi said in a statement, “Those desperate terrorist attempts won’t undermine the resolve of the Egyptians and their steadfast national unity, but will increase their determination to continue cleansing their country from terrorism and extremism.”

Egypt’s Grand Imam, Ahmed El-Tayyeb, called on Egyptian Muslims to reject terrorism and to show “love and attachment” to their Christian neighbors. He urged them to join in the Christmas celebration as a way of demonstrating unity.