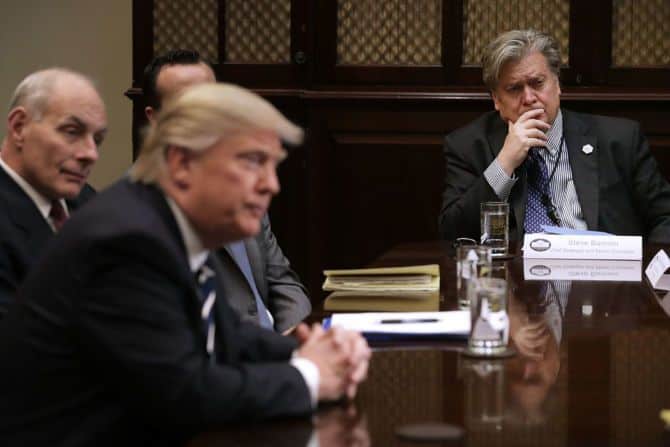 The gloves are off, and fists were flying inside the White House on Wednesday in an extraordinary war of words between President Trump and his ex-chief strategist Steve Bannon, who made abrasive statements about the president and his family in the tell-all book, Fire and Fury: Inside the Trump White House, by Michael Wolff.

Their disagreement could not be more crucial to the future of the Trump administration as Bannon claims Donald Jr. committed treasonous acts during the campaign in a July 2016 meeting between Donald Trump Jr., Trump son-in-law Jared Kushner, then-campaign chairman Paul Manafort and several Russians. Trump Jr took the meeting because the Russians had promised dirt on Hillary Clinton to the campaign — Bannon tells author Michael Wolff, according to the Guardian, which obtained an early copy of the book:

“The three senior guys in the campaign thought it was a good idea to meet with a foreign government inside Trump Tower in the conference room on the 25th floor — with no lawyers. They didn’t have any lawyers. Even if you thought that this was not treasonous, or unpatriotic, or bad s***, and I happen to think it’s all of that, you should have called the FBI immediately.”

Don Jr. has vehemently insisted the meeting was brief and uneventful, however, the sheer appearance of such a gathering conveys is a very bad one. Particularly when you consider two former Trump aides have already pleaded guilty to lying to the FBI about their contacts with Russia during the 2016 campaign.

Against his normal mode of communication, Mr. Trump fired back at Mr. Bannon in a written statement issued by press secretary Sarah Sanders.

“Steve Bannon has nothing to do with me or my Presidency. When he was fired, he not only lost his job, he lost his mind. Steve was a staffer who worked for me after I had already won the nomination by defeating seventeen candidates, often described as the most talented field ever assembled in the Republican party.”

Bannon revealing details about the Trump White House stirred Mr. Trump to say, “Now that he is on his own, Steve is learning that winning isn’t as easy as I make it look. Steve had very little to do with our historic victory, which was delivered by the forgotten men and women of this country.”

According to the Guardian, “Bannon went on, Wolff writes, to say that if any such meeting had to take place, it should have been set up ‘in a Holiday Inn in Manchester, New Hampshire, with your lawyers who meet with these people’. Any information, he said, could then be ‘dump[ed] … down to Breitbart or something like that, or maybe some other more legitimate publication.’ You never see it, you never know it, because you don’t need to … But that’s the brain trust that they had.”

Bannon, who was pushed out of the White House last summer, had remained in touch with Mr. Trump, but the two now appear to be at severe odds with each other as Bannon postures to undo the GOP’s strength and Mr. Trump.

Trump in his statement went on to say, “Steve had everything to do with the loss of a Senate seat in Alabama held for more than thirty years by Republicans. Steve doesn’t represent my base; he is only in it for himself.”

“Steve pretends to be at war with the media, which he calls the opposition party, yet he spent his time at the White House leaking false information to the media to make himself seem far more important than he was.” Trump said that was the only thing he did well and in his statement went on to say, “Steve was rarely in a one-on-one meeting with me and only pretends to have had the influence to fool a few people with no access and no clue, whom he helped write phony books.”

In closing Trump went on to compliment the GOP members of Congress and candidates who were supportive of the Make American Great Again agenda. “Like me, they love the United States of America and are helping to finally take our country back and build it up, rather than simply seeking to burn it all down,” Trump said in the final paragraphs of his statement.