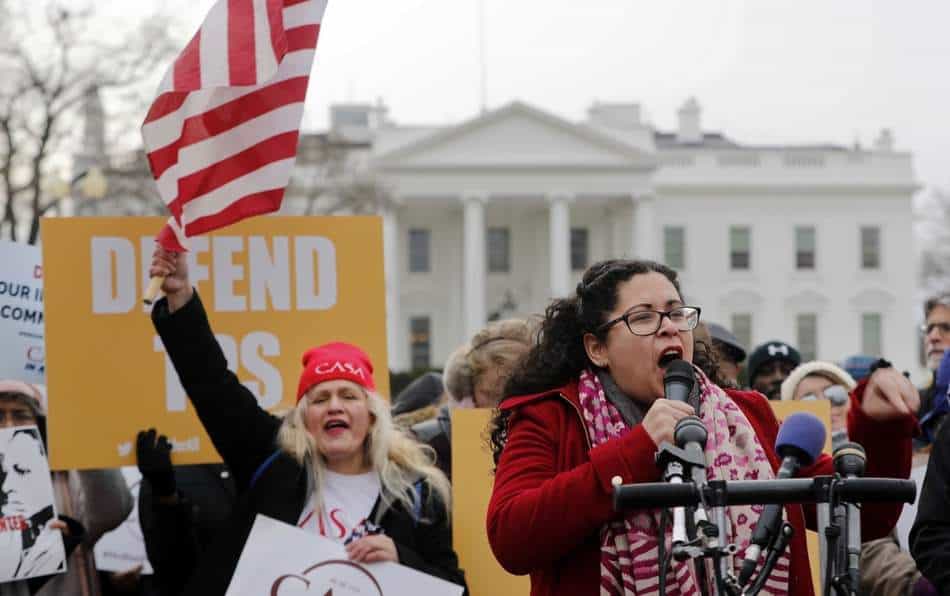 CASA de Maryland, holds a rally across from the White House in Washington DC

Approximately 200,000 Salvadorans who have been allowed to reside in the United States for more than a decade have been ordered to the leave the country, government officials announced Monday, in what is the Trump administration’s latest reversal of years of immigration policies most consequential to date.

Putting an end to a humanitarian program, known as Temporary Protected Status, Homeland Security officials stated Salvadoran’s who have been allowed to live and legally work in the United States since a pair of devastating earth quakes struck their country in 2001 must return to their homeland.

The 7.7-magnitude quake that struck El Salvador in January 2001 was the worst to hit the country in a decade. Then, two powerful earthquakes shook the country the following month burying neighborhoods as homes collapsed. More than 1,100 people were killed. Another 1.3 million were displaced. Over the past 15 years, the George W. Bush and Obama administrations extended the protections several times.

Activists and experts have put the number of Salvadorans who could lose protections closer to 200,000, noting that official statistics likely include people who are no longer in the program because their immigration status has changed or they left the United States.

Shielded from deportation if they arrived in the United States illegally, Salvadorans are by far the largest group of foreigners benefitting from temporary protected status. The decision came merely weeks after more than 450,000 Haitians lost protections granted after Haiti’s 2010 earthquake. Suggestions have led others in the program, namely Hondurans, to believe they may lose protection as well, Nicaraguans having lost their protection last year.

The El Salvadoran government coupled with immigrant advocates had pleaded for the United States to extend the program, as it has several times since 2001. These revelations have been met with trepidation by employers in California, Texas, Virginia and elsewhere.

“We had hope that if we worked hard, paid our taxes and didn’t get in trouble we would be allowed to stay,” Veronica Lagunas, 39, a Salvadoran who works at night cleaning offices in Los Angeles told the New York Times. Lagunas has two children born in the United States and owns a mobile home.

Despite its name, the administration says, the Temporary Protected Status program, known as T.P.S., has turned into a quasi-permanent benefit for hundreds of thousands of people. The goverment assertion is that the damaged roads, schools, hospitals, homes, and water systems have been reconstructed since the earthquakes, the Department of Homeland Security said they no longer belonged in the program.

“Based on careful consideration of available information,” the department said in a statement, “the secretary determined that the original conditions caused by the 2001 earthquakes no longer exist. Thus, under the applicable statute, the current T.P.S. designation must be terminated.”

Efforts to reign in protections for Salvadorans, Haitians and Nicaraguans will leave fewer than 100,000 people in the program, which was signed into law by President George Bush in 1990.

T.P.S provides temporary lawful status and work authorization to people already in the United States, whether they entered legally or not, from countries affected by armed conflict, natural disaster or other strife. The homeland security secretary decides when a nation merits the designation and can renew it for six, 12 or 18 months.

And while there is no limit to the number of extensions a country can receive, countries have received and then lost the designation in the past including; Bosnia and Herzegovina, which endured a civil war in the 1990s as well as Guinea, Sierra Leone and Liberia during the Ebola crisis. El Salvador was one of the first countries in the program because of its civil war; that designation expired in 1994.

The administration is giving Salvadorans in the program until September 2019 to get their affairs in order. After that, they no longer will have permission to stay in the country, forcing them into a wrenching decision.

Citing several factors in 2016, the government included; drought, poverty and widespread gang violence in El Salvador as reasons to keep the protections in place. And although El Salvador has rebuilt since the earthquakes; the violence in San Salvador, the capital, is considered one of the most dangerous cities on Earth, inhibiting investment and job creation, and prompting tens of thousands to flee. The country’s economy experienced the slowest growth of any in Central America in 2016, according to the World Bank.

Officials in the Trump administration say the only criteria the government should consider is whether the original reason for the designation — in this case, damage from the earthquakes — still exists.

The government of El Salvador had asked the Trump administration to renew the designation for its citizens in the United States, citing drought and other factors.

El Salvador’s president, Salvador Sánchez Cerén, spoke by phone with Kirstjen Nielsen, the homeland security secretary, on Friday to make one last plea. After Ms. Nielsen’s decision was announced on Monday, Mr. Sánchez posted on Twitter, calling it an 18-month “extension” of T.P.S. The post prompted a flurry of angry replies accusing him of trying to spin the bad news.