Interview: It Is No Longer Business As Usual For Illegal Miners – Fayemi 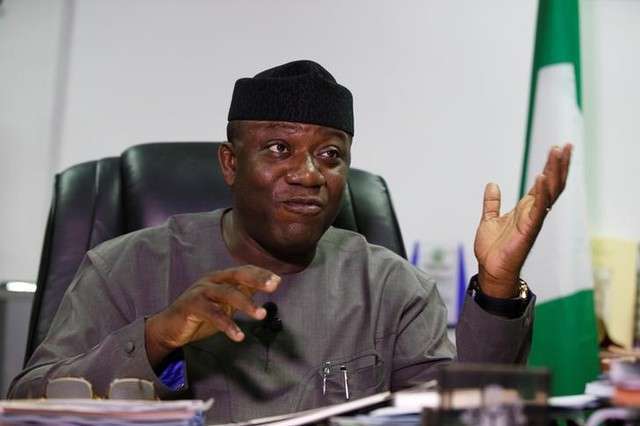 Dr. Kayode Fayemi is the Minister of Mines and Steel Development. In this interview, he outlined the implication of running a mono-product economy, industry challenges and illegal operations of some firms in the mines and steel sector. Excerpts:

What is the contribution of the Ministry of Mines and Steel to the Nigerian economy in 2017?

The Ministry of Mines and Steel Development contributed about N3.5 billion to the Federation Account in 2017 as the ministry made steady progress during the year, having surpassed the N2 billion it generated in 2016.

The mining sector grew by 2.24 percent in the last quarter. It remains a critical factor in the implementation of the Economic Recovery and Growth Plan (2017-2020), which projects that the minerals and metals sector will be one of those that will drive Nigeria’s recovery.

What are your plans to tame illegal activities in the local mineral trade?

The ministry had established a new department to monitor and control the local mineral trade chain comprising purchasing, sales, and export. In its short span, the agency had been able to put forth a roadmap for the development of a sustainable framework for mineral trade and export ecosystem.

What is the details of the saga among the ministry, BUA Group and Dangote Group over an alleged illegal operation?

The Executive Chairman of the BUA Group Abdulsamad Rabiu, published an open letter in several newspapers to the President titled: “A cry for Help: Wanton Abuse of Power By a Serving Minister Geared at Sabotaging Operations of BUA Cement.”

The publication, which is an unwarranted campaign of calumny against the Ministry and my office, is nothing but an attempt by the cement company to blackmail the Ministry into granting a free pass for illegal operations.

Do you mean BUA actually engaged in illegal operations?

In the records of the Ministry of Mines and Steel Development and the Nigerian Mining Cadastre Office (MCO), the BUA Group does not have a mining lease over the contentious site No. 2541ML. Therefore, its mining activities there are illegal.

Despite several interventions on the issue, what is the update now?

The Ministry stands by the Stop Work Order issued to the BUA Group and signed by the Permanent Secretary. The letter was issued after a thorough investigation confirmed that the BUA Group was indeed engaging in illegal mining of marble/limestone at a mine pit located on Geographical Coordinates N070 21′ 47.4″ E0060 26′ 51.8′. While the Run-of-Mine (ROM) is stockpiled at an area with geographical coordinates N070 21′ 48.4″; E0060 26’37.2.”

Clarification provided by the Mining Cadastre Office shows that the coordinates of the Mine pit and ROM stockpile area fall wholly within the area of mining Lease No 2541ML belonging to Messrs Dangote Industries Limited.

Has the firm (BUA) complied with your directive?

No, it had petitioned President Buhari. The Ministry had earlier in 2015 issued a Stop Work Order on this same disputed site, but the BUA Group disregarded the order and went ahead with its illegal mining activities, under heavy cover of armed soldiers, policemen, and men of the Civil Defense Corps.

The Management of BUA also resisted the enforcement of the latest Stop Work Order issued on October 17th, 2017 using a combination of armed militia, soldiers, and police officers to obstruct the team from the ministry in effecting the Stop Work Order.

While BUA Group in its publication admitted the fact that a suit over the ownership of the site was pending in a court of competent jurisdiction, the Group, however continued with its illegal mining activities on the site, which in itself is subjudice to both the court and the Mining Act 2007, which guides mining activities in the country.

Nigeria still relies solely on the oil sector as it accounts for 70 percent of the government revenues and 95 percent of export revenues. What is the implication of this, especially as the economy just exit recession?

An economy built solely on a commodity that is susceptible to revenue shocks and global market volatility is a highly vulnerable one. Our recent stint with economic recession has driven this fact home clearly. What is, however, clear is that oil revenues are simply not enough to match the demands for social mobility, economic opportunities and public goods now being levied on the government by a fast-growing population.

Our obsession with oil revenues has long distracted us from the untold potential for wealth and jobs creation that subsists in this sector. Nigeria’s bountiful resource base goes far beyond the widespread impression that Nigeria is all about oil.

What is the update on the revival of the Ajaokuta steel factory, which used to be the largest in West Africa, but now appears moribund?

What we have had to deal with in the case of Ajaokuta was a legacy of litigation. The Obasanjo administration concessioned it, the Yar’Adua administration came in and revoked it, the concessionaire took the federal government to the international arbitration, we got out of that with a modified agreement, which we are now implementing.

What are the details of the agreement?

The primary component of the modified agreement is that the federal government, which has never lost ownership of Ajaokuta… but because of the legal nature of the concession, for the period that it was concessional, it was supposed to be in the legal custody of the concessionaire. So, we retrieved Ajaokuta legally speaking and not formally speaking. And as part of that agreement, we were to allow the concessionaire to finish the remaining part of their concession in order to gain full access to Ajaokuta and as part of that deal, they are also supposed to give Ajaokuta operator the first right of refusal for every iron ore coming out of Itakpe because it is more of dual joint initiative.

What next after that?

We are moving into the reconcessioning phase because for us; the government is not willing to spend any additional money on Ajaokuta. We are quite convinced that the way to go is to give it to somebody who has the technical capacity, who has the financial capability and the track record to make it work first by completing it and secondly by ensuring that it produces liquid steel.