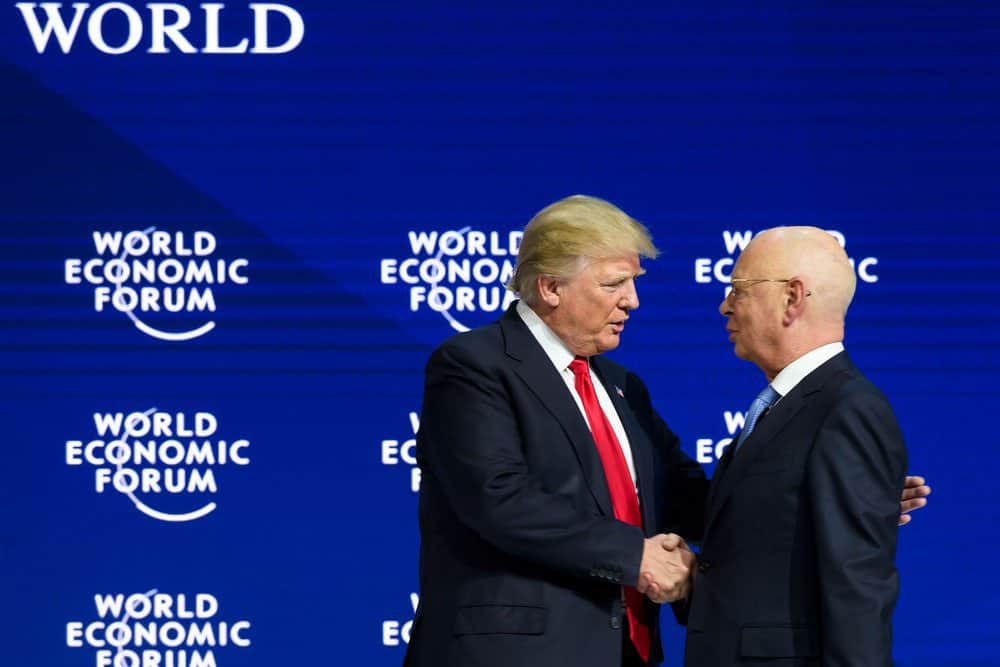 President Trump at the World Economic Forum in Davos, Switzerland,

President Trump’s visit to Davos this week received a mostly positive response from the world’s economic and political leaders. Despite running on an “America first” campaign and continuing this rhetoric during his tenure, he insisted the world would benefit from his stance.

Trump’s speech mostly focused on his history as a successful businessman. He cited America’s lower unemployment rates, company bonus increases, and stock market highs as a sign his presidency would continue to be good for business, appealing to the billionaire executives and corporate leaders in the audience.

Though world leaders have previously worried about Trump’s anti-globalist public statements, the president instead said he was open to negotiating international agreements like NAFTA (North American Free Trade Agreement) and even rejoin the TPP (Trans-Pacific Partnership).  “We would consider negotiating with the rest, either individually, or perhaps as a group, if it is in the interests of all,” he said.

The recent tax cuts seemed to be the best received among world leaders. “On behalf of the business leaders here in this room let me particularly congratulate you for the historic tax reform,” said World Economic Forum leader Klaus Schwab. Corporate and political leaders echoed this sentiment. Denmark’s minister of industry, business and financial affairs, Brian Mikkelsen, said companies from Denmark would be more likely to do business in America after the tax cuts.

At a private dinner, Siemens CEO Joe Kaeser announced because of tax reform, “we decided to develop the next generation of gas turbines in the United States.” Later, a German newspaper reported this decision was made in the fall before the tax cuts were announced.

According to the New York Times “Other European officials suggested that Mr. Trump’s rhetoric might have the effect of pressuring China to roll back production of steel, alleviating a global glut that has depressed prices.”

The president’s frequent outbursts on social media and to reporters that have caused alarm over the past year were mostly not mentioned. After Trump called African countries “shitholes” in a meeting about immigration last week, Rwandan president Paul Kagame demanded “an apology to not only the Africans but to all people of African descent around the globe.” But President Kagame did not remark on the comments after his private meeting with Trump, only saying the two had “good discussions.” In a tweet, Trump said it was an honor to meet with President Kagame.

In an interview with Piers Morgan, Trump expressed regret over his retweets of anti-Muslim rhetoric by alt-right group Britain First. At the time, Prime Minister Theresa May’s office said Britain First was  “the antithesis of the values that this country represents: decency, tolerance, and respect.”  Trump denied knowing anything about the organization to Morgan, saying he only supported fighting Islamic terrorists.

“’If you are telling me they’re horrible people, horrible, racist people, I would certainly apologise if you’d like me to do that,” he told Morgan.”

Some leaders shrugged off Trump’s sometimes incendiary public statements and focused on the overarching message of Davos. “His offensive comments are mostly about capturing media attention,” said Kanika Dewan, the president of global airport building company Bramco. Although Hindou Oumarou Ibrahim, the coordinator for the Association for Indigenous Women and Peoples of Chad, said she was not a fan, “I don’t want to waste my time or energy thinking about [Trump].”

Other attendees went even further. Andrea Bandelli, chief executive of Science Gallery International, a group which works to engage young people with science, said: “There is always a chance that everybody is changed for the better after attending the annual meeting.”

The most outward negative response to the president came during the audience question and answer session. Trump said he had no idea before he became president “nasty, how mean, how vicious and how fake the media can be.” According to the Huffington Post, this answer provoked boos and hisses from some audience members.

Overall, Trump’s emphasis on his business background seemed to appease world leaders and made his appearance at least a minor success. The president’s former chief of staff Steve Bannon once said “I’d rather be governed by the first hundred people at a Trump rally than by the Party of Davos,” but such rhetoric was absent from Trump’s remarks. For at least a few days, the world was reassured President Trump was capable of being a calm, confident leader.