Goods Worth N10 Trillion Smuggled Into Nigeria In 2017 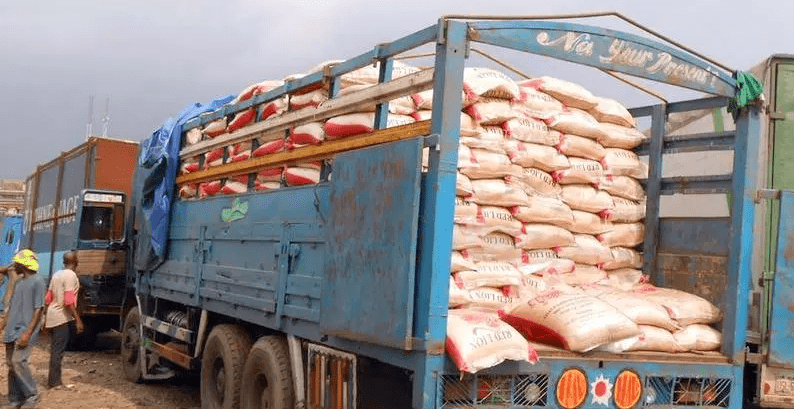 The value of goods and items smuggled into Nigeria was N10 trillion by the end of 2017, investigation revealed.

A top source in the Nigerian Shippers Council told our correspondent that, while the goods and items smuggled into the country through about 1,500 porous borders increased from over N2 trillion in 2016 to over N4 trillion in 2017, assorted goods and items illegally imported via the seaports also rose by over 100 percent, from N4.35 trillion to N8.7 trillion within the same period.

Meanwhile, operators in the manufacturing sector are lamenting over what they described as negligence on the part of the three tiers of government, who they alleged encourage the activities of the smugglers.

The Chairman of the Nigerian Textile Manufacturers Association, Mr. Abiodun Ogunkoya, alleged that the development costs the nation’s textile industry about $325 million annually, a figure he attributed to the evasion of customs duty and value added tax by smugglers of textile materials.

“Over 90 percent of the over $2 billion worth textile materials imported into Nigeria every year are smuggled into the country through the borders, seaports, and airports.

“Some fabrics produced in China have trademarks of Nigeria manufacturers with and fake Standard Organisation of Nigeria logo printed on the labels is almost everywhere across the country,” he said.

However, Caracal Reports also found that the scanners at the seaports in the country have collapsed and that such loophole has been explored by illegal arm smugglers as they had imported about 200 million illegal arms in the country as at the end of third quarter of 2017.

According to him, over 70 percent of illicit small arms in West Africa are in Nigeria.

“Most of the weapons smuggled into Nigeria are from Mali and Libya and such has been a threat to the peace of the nation, especially as the 2019 general elections draw near. With the negligence observed in the operations of government workers, there will be more influx of weapons through the international airports, seaports, borders before 2019 general elections,” he said.

Another security expert, Capt. Joseph Babatunde (rtd.), explained that there is urgent need for the nation to protect its citizens from an unwanted war that could threaten its sustained democracy as it witness the influx of Arms, Narcotics, Ammunition, dirty Bomb, unwholesome items and Weapon of Mass Destruction through the implementation of the provision of international Cargo Security Agreement.

He said, “The government must constitute a committee of trade procedure experts urgently because that is the only way to address the shortfall in the import process, which constitutes bottlenecks and impede the component of trading across the border on ease of doing business.”

Meanwhile, the Chairman, Senate Committee on Customs, Excise & Tariff, Senator Hope Uzodinma, disclosed that his committee has received several reports on the increasing value of smuggled goods and items through borders and international airports, from World Bank, concerned individuals and groups within and outside the country.

“The figure of goods smuggled through the seaports is even more mind-boggling. The story is the same for our international airports. It was more frightening to note that the annual turnover in the hands of smugglers was more than the country’s annual budget.

“Illegal importation of goods had equally affected local industries, leading to loss of jobs, among others, adding that smuggling was fast proving to be the biggest industry in Nigeria and must be fought to a standstill,” he said.

He added that there were other issues of leakages, arising from miss-invoicing by international traders, abuse of free trade zone policies and temporary import permit.

However, the Public Relations Officer, NCS, Mr. Joseph Attah, explained that the lack of equipment in the service put pressure on it to discover dangerous consignments and other smuggled goods.

“The Customs go the extra mile in intercepting dangerous cargoes as it has adopted 100 percent examination at the ports, adding that it is time-consuming and very stressful.

“In the absence of equipment to discover these illegal goods, we are increasingly relying on intelligence to nip the dangerous imports in the bud.

“At our land borders, the porosity of the borders is another challenge, especially in the dry season; everywhere is a road for the smugglers,” he said.