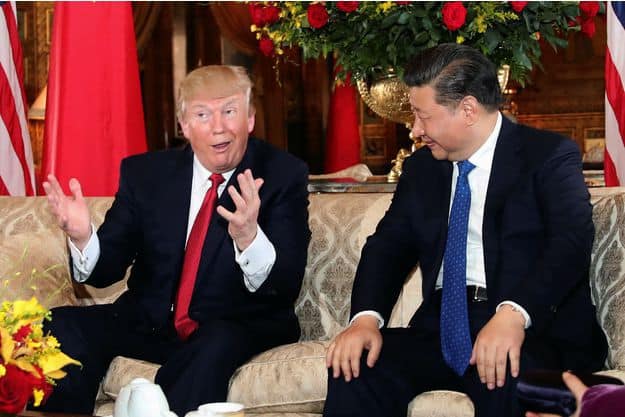 US president Donald Trump and president Xi of China

The Chinese President stressed that these efforts are in China’s best interest. He believes imports are required by the Chinese people and will help improve their quality of life.

Xi did not mention an evolving trade dispute with the United States or US President Donald Trump’s threat to impose new tariffs on $150 billion of Chinese goods.

The US President followed up with an appreciative tweet yesterday that will likely precede a media blitz, a victory lap.

Very thankful for President Xi of China’s kind words on tariffs and automobile barriers…also, his enlightenment on intellectual property and technology transfers. We will make great progress together!

US-China trade relations have been strained for the past several weeks. Trump unexpectedly announced and imposed tariffs on Chinese steel and aluminum imports. He then ordered the US Trade Representative to review tariff increases for an additional $50 billion of Chinese goods. The Chinese retaliated by threatening tariffs on $3 billion of US goods followed shortly thereafter with a threat of $50 billion in US agricultural products.

Xi’s speech and Trump’s tweets may represent a ratcheting down of tensions although no concrete solutions have been implemented.

In his speech Xi also suggested China is the real victim of unfair, global trade practices. Xi said, “We hope developed countries will stop imposing restrictions on normal and reasonable trade of high tech products and relax export controls on such trader with China.”

On Tuesday China filed a complaint with the World Trade Organization. The Chinese challenged the legality of Trump’s steel and aluminum tariffs. China requested a 60-day moratorium on the tariffs that would include consultations with the United States.

Xi also announced that China will host the “first China International Import Export in Shanghai” in November. Xi said the annual event will be a major policy initiative to open up the Chinese market. Xi invited “friends from around the world” to participate.