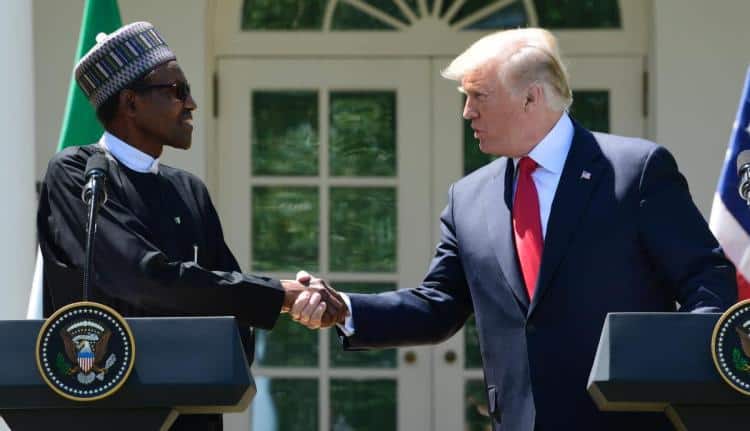 The meeting comes weeks after Rex Tillerson, then U.S. secretary of state, visited Nigeria and other African countries in March only to be fired after his return to Washington.

US President Donald Trump’s reported disparaging of African countries did not come up in his talks with Nigeria’s president, the two leaders have said.

Muhammadu Buhari sidestepped a reporter’s question about Mr. Trump’s alleged use of the term “shitholes” to describe certain developing nations.

In their White House news conference, Mr. Trump added: “We didn’t discuss it.”

Mr. Buhari was asked during Monday’s joint press conference about a report in January that Mr. Trump had complained about immigrants coming to the US from “shithole countries,” specifically referring to Haiti, El Salvador, and some African nations.

The Nigerian president diplomatically replied: “I’m not sure about, you know, the validity of whether that allegation against the president is true or not. “So the best thing for me is to keep quiet.”

Mr. Trump did not deny he had used the term in his own reply. “The [Nigerian] president knows me, and he knows where I’m coming from,” he said. “And you do have some countries that are in very bad shape and very tough places to live in.”

Mr. Trump took the opportunity to rail against US immigration laws, calling them “obsolete,” “weak” and “pathetic.”

“Our immigration laws in this country are a total disaster,” he said, renewing calls for a border wall.

The White House recently sold 12 counter-insurgency aircraft worth $496m (£360m) to Nigeria to help in its fight against Boko Haram jihadist insurgents. The US previously refused to sell military aircraft to Nigeria, citing human rights concerns.

Mr. Trump said he hoped the Nigerian authorities would “protect innocent civilians of all faiths, including Muslims and including Christians.” He also addressed sectarian strife in the African country, where 18 people, including two priests, were killed in an attack last week on a church.

“We’ve had serious problems with Christians who have been murdered, killed,” Mr. Trump said. “We’re going to work on that problem and working on that problem very, very hard.”

Mr. Trump also said he hoped Nigeria would remove trade barriers to allow imports of American agricultural produce, which is another contentious issue as the Nigerian government has been trying to develop its agriculture sector as it seeks to deal with mass unemployment and an economy reliant on oil.

At home, President Buhari faces multiple security challenges, including the nine-year-old insurgency by Boko Haram in the north-east, and mounting insecurity in the center of the country.

The priorities include “promoting economic growth and reforms, fighting terrorism and other threats to peace and security, and building on Nigeria’s role as a democratic leader in the region,” she said.

Buhari, a 75-year-old former military ruler who took office in 2015, last week announced that he would seek a second term in elections next year. He flew to Britain for talks with Prime Minister Theresa May shortly after the announcement.

Last week Buhari was invited to discuss communal killings with the House of Representatives. The spate of killings in central Nigeria has left hundreds of people died in clashes this year between semi-nomad herdsmen and settled farmers in central states, including 16 killed in an attack on a church in Benue last Tuesday.

The incessant violence has raised concerns as to whether or not the government has the ability to maintain security in the country, applying pressure to Buhari less than a year before the election.

The motion in the lower house called for the president to appear to discuss the situation in Benue, where the highest-profile killings have taken place, and other states in the region, including Taraba, Nasarawa, and Kaduna.

In recent weeks Buhari has drawn criticism from social media and the opposition for saying many young Nigerians think they need “do nothing” to enjoy free homes, hospitals, and schooling because they live in an oil-rich country.

Buhari made comments in London where he attended the Commonwealth Heads of Government Meeting. “More than 60 percent of the population is below the age of 30,” he told a business forum last Wednesday according to the New York Times. “A lot of them haven’t been to school, and they are claiming that Nigeria has been an oil producing country, therefore, they should sit and do nothing, and get housing, healthcare, education free.”

These comments could adversely affect the people who he seeks re-election by if he wishes to remain the leader of Africa’s top oil producing country. The median age in the nation of around 190 million people is just 18, according to the United Nations.

His remarks prompted the hashtag #LazyNigerianYouths on twitter even though Buhari, a former general who was also a military ruler in the 1980’s, did not use the word lazy.

Young Nigerians cited examples of their industry and fortitude in a nation where most people live on less than $2 a day, public services are inadequate, and corruption is a household name.

“Imagine living and surviving in a country that has no plan for you and constantly tries to make life hard, yet we survive and try to break through. We are not #LazyNigerianYouths,” wrote Twitter user @UmehOMA.

Buhari has promised to mend the economy and reduce Nigeria’s dependence on oil, but it fell into recession in 2016, largely due to low crude prices. Growth returned last year but remains slow to return to normal production rate. Four out of every 10 people in the workforce are unemployed or underemployed.

“Most disheartening is that these are the same young persons who form the highest demographic of voters that put their confidence in him in 2015,” it said in a statement.