Merkel Fires Back At Trump At NATO Summit 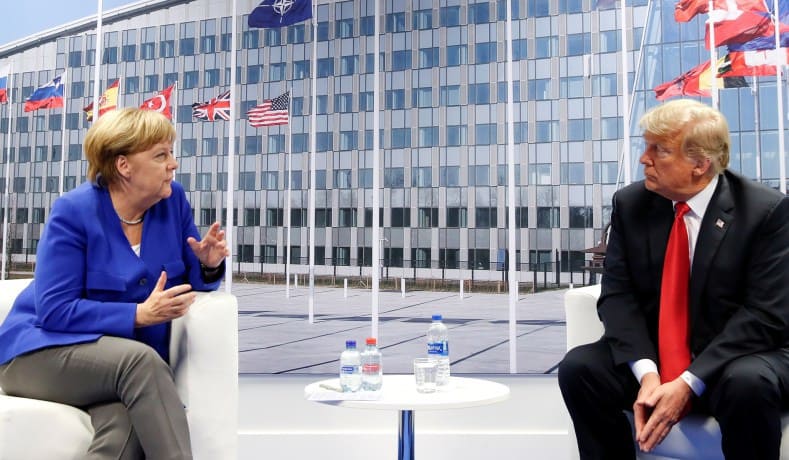 In response to Trump’s claims that “Germany is a captive of Russia,” Merkel said she was happy her nation was “unified in freedom.”

Referring to her upbringing in Soviet-controlled East Germany Merkel said, “I wanted to say that, because of current events, I have witnessed this myself, that a part of Germany was controlled by the Soviet Union. And I am very happy that we are today unified in freedom as the Federal Republic of Germany.”

Merkel did not mention Trump directly in her statement, but her comments were almost certainly directed at the US President.

Hours before the summit officially opened Trump said that Germany pays “billions and billions of dollars to Russia for oil.

NBC News reported that Trump said, “Germany is a rich country” and asked why the United States should “protect you against Russia” the countries are making deals.

“You tell me, is that appropriate?” Trump asked. “Germany is totally controlled by Russia.”

According to NBC News, German Defense Minister Ursula von der Leyen said on Wednesday that she did not “ really understand what he means” by saying her nation is “captive” to Russia.

Ursula said, ”We have a lot of issues with Russia, without any doubt, but on the other hand you should keep a communication line between countries or alliances and opponents without any question. So I’m curious to listen in-depth in the meeting what the American president means by that.”

NBC News reported that Trump and Merkel met privately at 9:15 am. They discussed the Nord Stream 2 pipeline, a project that would bring Russian gas to Germany’s Baltic coast. Trump said the meeting was “great” and that he has a “very, very good relationship” with Merkel.

Merkel said they discussed migration and trade, according to NBC News.

Back home, Senate Foreign Relations Chairman Bob Corker told CNN on Wednesday that Trump’s rhetoric at the NATO summit is damaging the US.

”Sometimes the rhetoric to me is just damaging to us and damaging to others unnecessarily. But I think there are ways of communicating with our friends. And sometimes it feels like we punch our friends in the nose and hold our hand out to people who are working strongly against us like Putin and Russia,” said Corker.