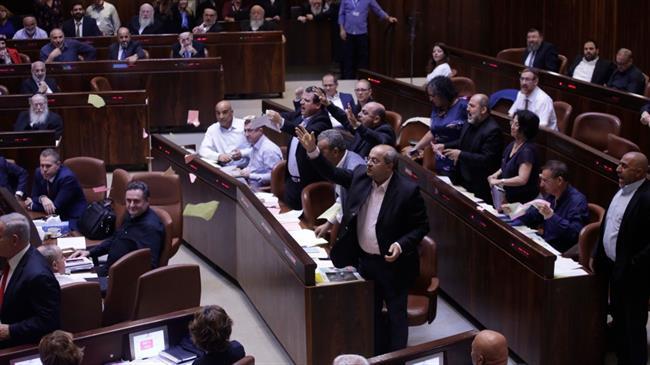 Arab lawmakers tear the nation-state bill in protest after it passes in the Knesset on July 19, 2018

Last week Caracal Reports published an article detailing the controversial ‘Nation State’ bill. Israeli Prime Minister Benjamin Netanyahu encouraged a vote in the Knesset prior to the July 22nd recess. From our reporting:

On Thursday Netanyahu was granted his wish when the ‘Nation State’ bill passed in the Knesset by a narrow 62-55 margin. Two members abstained from voting. The result led to several Palestinian MPs to be removed from chambers by security after shouting, “You are racist,” towards Parliment Speaker Yuli-Yoel Edelstein.

The new law constitutionally enshrines the identity of Israel as the nation-state of the Jewish people only – despite the 1.5 million Palestinian citizens of the state and residents of East Jerusalem and the Golan Heights – and guarantees the exclusive ethnic-religious character of Israel as Jewish.

“By defining sovereignty and democratic self-rule as belonging solely to the Jewish people – wherever they live around the world – Israel has made discrimination a constitutional value and has professed its commitment to favoring Jewish supremacy as the bedrock of its institutions,” he continued.

Critics state the law does not guarantee Palestinian and other non-Jewish citizens of Israel are protected to equal rights under the law, demotes non-Hebrew languages to being ‘special status.” Liberal to Social Democratic Jewish Isralies, Palestinian citizens of Israel, and Israel’s president and civil rights groups have all stated the law could amount to apartheid.

The Anti-Defamation League and The American Jewish Committee immediately critique the passing of legislation stating that it is ‘disappointing’ and could lead to discrimination. Jeremy Ben-Ami of the progressive J Street organization did not hold back his disdain for the bill going as far as to say Netanyahu’s government “was born in sin,” as quoted by Haaretz, he continued:

Its only purpose is to send a message to the Arab community, the LGBT community and other minorities in Israel, that they are not and never will be equal citizens,” said Ben-Ami. “Two months ago we celebrated the 70th anniversary of the Israeli Declaration of Independence, where it was written that the State of Israel ‘will ensure complete equality of social and political rights to all its inhabitants irrespective of religion, race or gender.’ Today Netanyahu’s government is trying to ignore those words and the values that they represent.

The National Council of Young Israel praised the bill, “While the democratic State of Israel facilitates freedom of religion and affords people of various backgrounds the right to visit and reside there, the reality is that Israel is inherently a Jewish state and affirming that fact does not contravene the liberties that it benevolently bestows to individuals of other faiths.”

The passing of the bill will undoubtedly raise Israeli-Palestinian tension and push the conflict back into the international spotlight. The full text of the law is below, provided by J Post:

2. National symbols of the State of Israel
a) The name of the state is Israel.
b) The flag of the state is white, two blue stripes near the edges, and a blue Star of David in the center.
c) The symbol of the state is the Menorah with seven branches, olive leaves on each side, and the word Israel at the bottom.
d) The national anthem of the state is “Hatikvah”
e) [Further] details concerning the issue of state symbols will be determined by law.