Zimbabwe: Protesters On Rampage Over Delay Of Presidential Election Results 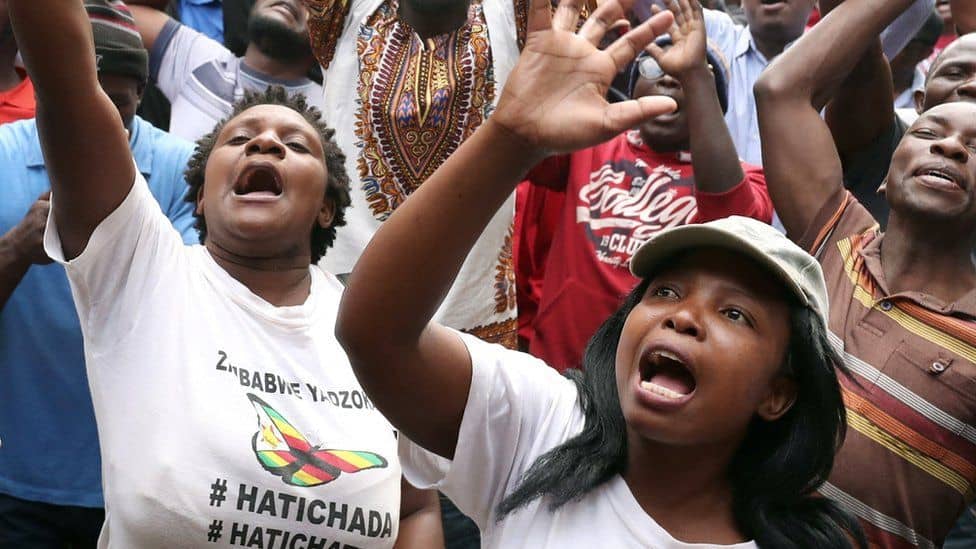 The first-post Robert Mugabe elections in Zimbabwe is overshadowed by violent arising from a growing rage among opposition supporters over the delay in the release of presidential election results held on Monday.

Thousands of Zimbabweans on Wednesday thronged the streets of Harare, the country’s capital to stage what later became a violent demonstration.  Three people have been confirmed dead in the clash between protesters who are mainly supporters of the opposition candidate, Nelson Chamisa and security operatives on Wednesday.

Zimbabweans went to polls on Monday to elect a new President following Robert Mugabe’s ouster in November last year. International observers have so far commended the Zimbabwe Electoral Commission (ZEC) over the peaceful conduct of the election. Over five million people were registered to vote in the election which witnessed an impressive turn-out.

But growing anger among opposition parties and their supporters over the delay of the election results has since been dwarfing the positive outcomes of the election. Oppositions alleged the delay in announcement of results was a plot to manipulate the election in favor of Mugabe’s interim successor, President Emmerson Mnangagwa.

Monday’s election was dominated by the tight-race between Mnangagwa and his chief presidential rival at the polls, Chamisa, of the MDC Alliance.

CARACAL REPORTS had prior to the election ran series of stories detailing Chamisa and other opposition parties’ fears of ZANU-PF rigging the polls.

BBC reports that business activities were paralyzed on Wednesday over the massive protests, as the electorates keenly anticipate the outcome of the historic election.

It, however, reports that there is no sign of any organized protest by opposition supporters on Thursday morning, as at the time of filing this report. A truckload of armed policemen and soldiers were driving around the city shouting, “Behave yourself, people of Zimbabwe,” the report adds.

In a bid to douse rising tension in the country, President Mnangagwa has been churning out series of persuasive tweets to calm aggrieved members of the opposition parties, assuring that the election results would be released.

“This land is home to all of us, and we will sink or swim together,” he had said in one of the tweets, to assure opposition parties he would accept the election results to be declared by ZEC.

But it seems his appeal is falling on deaf ears with many fast losing patience over the delay of the election results.

Earlier, ZEC had declared President Mnangagwa’s Zanu-PF party as the winner in the parliamentary elections, winning with a two-thirds majority.

The electoral body has also responded to the demand for presidential election results, assuring that there would be “absolutely no skulduggery” in the electoral results.

On Thursday, ZEC again reiterated its commitment to announce the election results but kept mum on the actual date the results would be published.

So far, both Mnangagwa and Chimasa have been engaged in a war of words over strings of violent protests rocking the country in the aftermath of Monday’s elections.

In a swift response, President Mnangagwa fingered MDC Alliance for the violent demonstrations, vowing to probe the cause of the protests and bring those who masterminded them to book.

Observers are, however of the opinion that until the underlying cause of the protests which is the delay of presidential election results is addressed, the country may witness more demonstrations in the coming days.

International bodies are already weighing into the matter to forestall further violence in the country.

UN Secretary-General Antonio Guterres and UK foreign office minister Harriett Baldwin have both expressed worry over the development, urging protesters and politicians in the country to embrace peace.

“People must be guaranteed their right to protest,” Cuanachain was quoted as saying in a press release by the BBC.