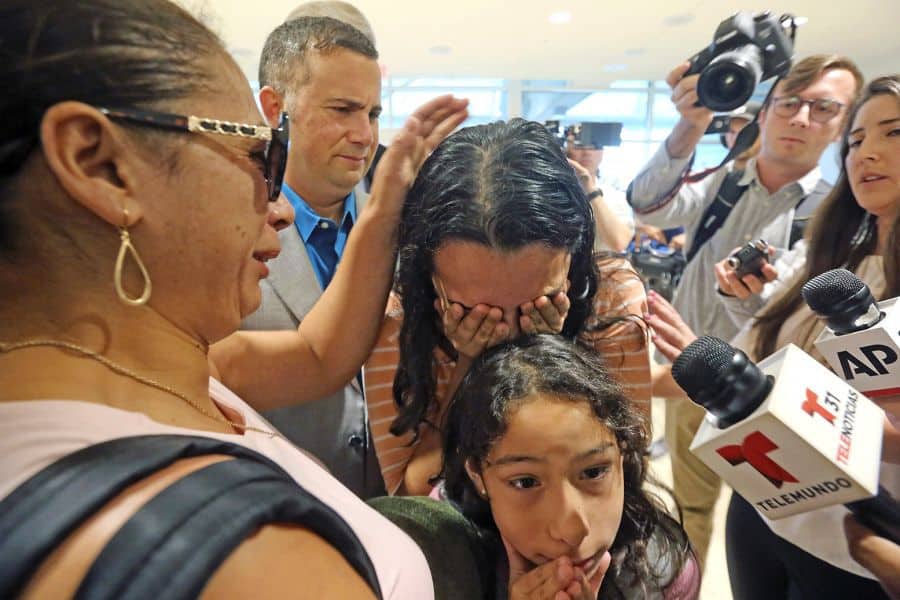 On Friday, Alejandra Juarez the wife of a decorated Iraq War veteran said goodbye to her family at Orlando International Airport.

“We are utterly disappointed in the decision by ICE to deny Alejandra’s stay of removal,” Rep. Darren Soto (D-Fla.) said in a statement. “We will continue the fight against the Trump administration’s heartless immigration policies tearing families apart.”

The family’s attorney, Chelsea Nowel, said Alejandra Juarez has no criminal record besides her illegal entry. She was flagged during a traffic stop in 2013; the Orlando Sentinel reported earlier this month.

Juarez, more than 20 years ago, entered the United States illegally from Mexico.

Letters to Congress were delivered this week, asking the President to stop her deportation.

The news outlet noted that Soto filed the “Patriot Spouses Act” on the family’s behalf, but the bill has not been taken up by a House committee.

“The United States has a lot of policies in place to protect veterans and active duty and their families, and it is absolutely, incredibly, frustrating that these are not being made available to the wife of a decorated veteran who has served overseas multiple times,” Nowel said, according to Military Times.

There is an immigration policy for members of the military and their families called “parole in place” to “recognize the important sacrifices made by U.S. Armed forces members, veterans, enlistees, and their families.”

The Citizen and Immigration Services website says they provide “discretionary options such as parole in place or deferred action on a case-by-case basis.”

“We are very hopeful we will be able to work with the Department of Homeland Security and with ICE to afford her an ability to stay,” Nowel added.
ICE previously considered her a low priority case, until the “zero tolerance” policy.

Temo served in the U.S. Marine Corps and later joined the Army National Guard in Florida. He came to the U.S. from Mexico as a child and was naturalized days before he was deployed to Iraq.

Temo, who describes himself as aTrump voting, conservative — wrote a letter to the president asking for a reprieve for his wife, reported Stars and Stripes.

“I love this country. This country has given me great things because we have worked hard. But the America we are living in now is getting full of hate,” Juarez said. During the Obama administration, she said she was always told she is not a criminal and has nothing to worry about when she regularly called to check in with immigration authorities.

Jaurez said more than 11,000 military families were going thru what she and her family were experiencing.

On Wednesday Soto sent bipartisan letters addressed to Trump, the Defense Department and the Department of Homeland Security requesting a stay of removal.

Few exceptions for unauthorized immigrants are now being made under Trump’s immigration policy — even in cases when a crime has not been committed.

Jaurez advised those listening to think twice before enlisting in the military or marrying an immigrant, “Think it twice. Think if it’s really worth it for you to serve this country, because look how they treated me,” she said.