Nigeria Boils As APC, PDP In Disarray Over DSS Siege On NASS 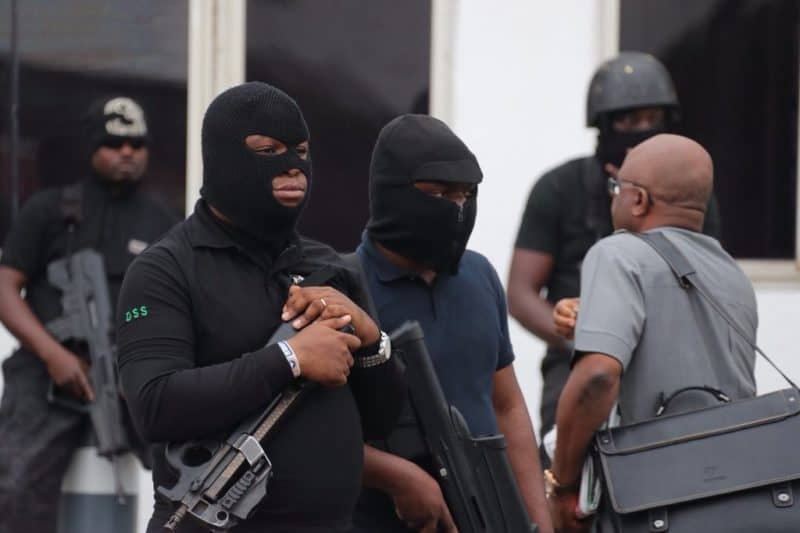 Panic rented the air in Nigeria yesterday when some groups of masked operatives of Department of State Services (DSS) took over the National Assembly premises and restricted lawmakers from the legislative chambers.

Several lawmakers were stranded at the gate when the operatives prevailed upon them and denied them access to the legislative chamber to carry out their national assignment.

Among the lawmakers that were barricaded outside the assembly was Senator Ben Bruce from Bayelsa East, Senator Ibrahim Rafiu among others.

Ibrahim while addressing the journalist over the unexpected development explained that “We have been refused entry into the National Assembly by DSS operatives. We are waiting for the rest of our colleagues to come. Then we will see how many of us they want to kill. We have told this number of operatives is not enough. They should go and bring more men to prevent us from entering Nigeria’s symbol of democracy.”

Recall that the National Assembly is on recess till September 26, but an urgent meeting summoned by the Senate president Bukola Saraki on a national matter such as 2019 budget.

The principal opposition party, PDP, allegedly interpreted the proposed convergence of the senators at the Senate as a secret plot to impeach the Senate president Bukola Saraki.

The National Publicity of PDP, Mr. Kola Ologbondiyan, said the demonstration by the DSS at the National Assembly was pure anarchy.

He said “We must not allow those who have no respect for laws to take charge of our lives, because what they are plotting to do as a huge capacity to create anarchy for the nation. The NASS has only gone for their annual recess, and it’s within their right to choose when to come back”.

The acting President Yemi Oshinbajo sacked the Director-General of DSS over the conduct of his team at the National Assembly.

PDP had earlier accused the ruling party, All Progressive Congress of being the sponsor of blockage that was carried out by DSS men.

Following this, the DSS Director –General Lawal Daura, was sacked by the acting president Yemi Osinbajo after which he was summoned.

The media aide to the acting President, Laolu Akande, said “Acting president Yemi Osinbajo has directed the termination of the appointment of the DG of the DSS, Mr. Lawal Musa Daura. Mr. Daura has been directed to hand over to the most senior officer of the State Security Service until further notice.”

Osinbajo while condemning the act by the DSS men, said the unauthorized takeover of the NASS was a gross violation of the rule of law.

He added that the unlawful act was carried out without the knowledge of the presidency.

It was also learned that the acting president has vowed that every individual involved in the act will be punished accordingly.

“Prof. Osinbajo is consequently assuring Nigerians that all persons within the law enforcement apparatus who participated in this travesty will be identified and subjected to appropriate disciplinary action.”

Daura must be persecuted – Ozekhome

One of the Nigerian leading human right lawyers, Chief Mike Ozekhome SAN, has called for the immediate prosecution of the former DG of DSS after his sack.

“Nigerians had woken up on 7th August 2018, to behold the ugly specter of a menacing armada of a siege laid on the NASS by mask-wearing DSS operatives. It was an undoubted failed attempt to overthrow the 3rd arm of the legitimate government of Nigeria. Both in law and fact, de facto and de jure, it is a case of pure treason or treasonable felony that is punishable with either death or life imprisonment.

The crude invasion and cordoning off of the NASS, wherein Senators, members of the House of Representatives, Clerks and staff of the NASS, were violently prevented by hooded operatives, was hatched by top APC echelon and the presidency to illegally and unconstitutionally overthrow the leadership of the Senate, the red chamber of the bicameral legislature, Viet armies, by force of arms, through the vile use of weaponry.”

He added that “As is to be expected, the APC has disingenuously denied it. But, no one believes it; not even its slavish, fawning, bootlicking, and die-hard supporters, cheerleaders and chorus masters. The president is alleged to have cleverly traveled abroad to the UK, on a “working visit,” to provide a readymade alibi of not being party to the ugly and odious developments back home.

As our hard-fought democracy totters towards total annihilation by this desperate government’s dastardly and unspeakable acts of impunity, totalitarianism, absolutism and fascism, Nigerians and the international community should brace up for tougher times ahead, in the fight for the control of the heart and soul of this beleaguered nation.

Ozekhome, however, maintained that “I see Mr. Lawal Daura, the now sacked DG, DSS, as a mere unfortunate fall guy, who has been made the victim and guinea pig of our blood-spattered political chess board. I say this because, there is no way that Daura, not being the president and Commander-In-Chief of the Armed Forces of the Federal Republic, even with the intoxicating and inebriating effect of power liquor, can unilaterally, whimsically, capriciously and arbitrarily lay siege on the NASS without presidential directive or at least approval,whether tacit or overt, of the “ogas at the top”. This is a very sad day for democracy in Nigeria. I am convinced that past heroes, heroines and founding fathers and mothers of this unworking Nigerian project must by now, be weeping in their graves. But, make no mistake about it: it is simply not enough for this pretentious and Janus-faced government to simply sack Daura, an action that was forced on it anyway, by the spontaneous national uproar and unanimous outcry and condemnation of this barbaric and unconscionable act of attempted treason. The full weight of the law must be visited on Daura and all those usurpers who believe that Nigeria is nothing but their footstool of hegemonic self-aggrandizement and ego satiation. Sections 37 to 43 of the Criminal Code and sections 410 and 415 of the Penal Code, which operate in the southern and northern parts of Nigeria, respectively, deal with the offenses of treason and reasonable felonies. While treason is punishable by death, a treasonable felony is punishable by life imprisonment.

All those who participated in the national shame that has caused Nigeria monumental international odium, opprobrium and derision, must inevitably fall into one of these limbs. It is a treasonable felony punishable with life imprisonment for anyone to device, by overt acts, to depose or levy war against the sovereign, or to compel changes of policy, or to intimidate or overawe Parliament(NASS).

“The sections provide, inter alia, that, anyone who levies war against the state in order to intimidate or overawe the president or governor of a state, or who conspires with others, either within Nigeria or outside Nigeria, to levy war against Nigeria, or instigate a foreigner to invade Nigeria with an armed force, is guilty of treason and is punished by death. It is treasonable felony punishable with life imprisonment,for anyone to become an accessory after the fact to treason,or fails to report to appropriate authorities of his knowledge of people attempting to commit treason,or forms an intention to commit the offence of treason, or prepares ,advises, aids, or participates in any act of war against a traditional chief or a band of citizens. Let the law now take its full course. It is no respecter of any person. Enough is enough”, he concluded.

Meanwhile, the National Chairman of PDP Uche Secondus has called on the government of United Kingdom to expel President Muhammadu Buhari immediately.

Secondus alleged that “Buhari, had planned the DSS attack on National Assembly before he travels on vacation in London.”

He said the UK should not allow its environment to be turned into a haven for anti-democracy conspirators.