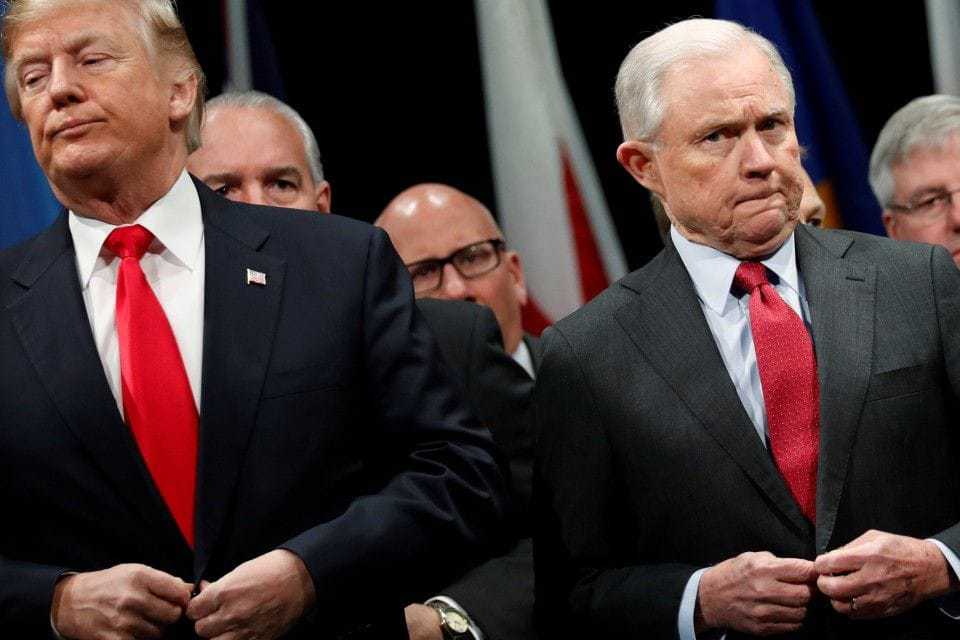 After months of a long-standing rift, attorney general Jeff Sessions shoved back against President Donald Trump on Thursday after the President’s latest scathing criticism.

In attempts to bounce back from Tuesday’s conviction of former campaign chairman Paul Manafort and a guilty plea from his former personal lawyer Michael Cohen, Trump accused Sessions of failing to take control of the Justice Department.

During a segment that aired on Thursday, Trump told “Fox and Friends” host Ainsley Earhardt that Sessions “never took control of the Justice Department and its sort of an incredible thing.”

“While I am attorney general, the actions of the Department of Justice will not be improperly influenced by political considerations,” said Sessions, an Alabama Republican and the first senator to endorse Trump’s presidential bid.

“I took control of the Department of Justice the day I was sworn in, which is why we have had unprecedented success at effecting the President’s agenda,” Session said in a statement.

Trump went on to say that the only reason he gave Sessions the job was that he felt loyalty for being an early Trump supporter and seemed to call into question Sessions character during the interview by asking, “What kind of man is this?”

For more than a year, Trump has spoken with frustration and regret for appointing Sessions to be attorney general; especially as it pertains to Sessions’ decision to recuse himself from the federal Russian-collusion investigation because he had twice met with Russian ambassador Sergey Kislyak while he worked on Trump’s campaign.

Sessions denied having had any such contact during his confirmation hearing — under oath.

Trump’s first public attack of Sessions occurred in the New York Times on July 19, 2017, where he said he wouldn’t have nominated Sessions if he knew he was going to recuse himself.

Despite Trump’s constant criticism, Sessions has made it clear he has no plans to vacate his position voluntarily.

Trump and Sessions relationship was likely further splintered when Sessions’ Senate seat went to Democrat Doug Jones in the special election. Trump stuck by Republican Ray Moore after sexual assault accusations, but Sessions contradicted Trump and said, “I have no reason to doubt these young women.”

During the interview, Trump also took a swing at federal prosecutors for their practice of offering defendants leniency in exchange for information.

“I’ve seen it many times, the president said. “I’ve had many friends involved in this stuff. It’s called flipping, and it almost ought to be illegal.”

The President’s comments came before it was publicly announced that long-time friend and chief executive of the company that publishes the National Enquirer, David Pecker, was granted immunity by the federal prosecutors for providing information about Mr. Cohen and Mr. Trump.

American Media Inc. is alleged to have arranged payments with Mr. Cohen in efforts to silence women who alleged sexual encounters with Mr. Trump. It remains unclear if prosecutors have decided to proceed with filing charges against American Media for unlawful corporate campaign contributions.