Zimbabwe: Mnangagwa Sworn In After Court Struck Out Fraud Allegations 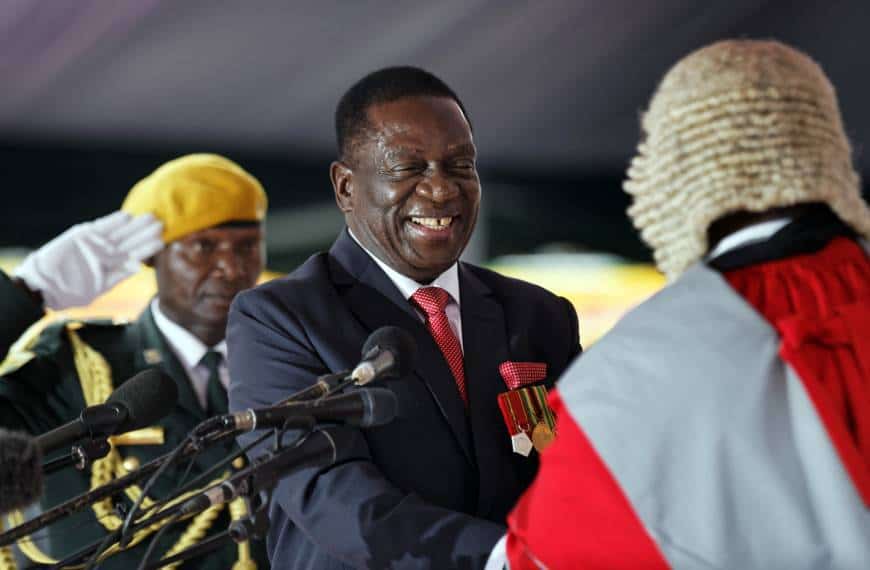 Emmerson Mnangagwa was on Sunday sworn in as President of Zimbabwe to officially kick-start his charge of the country’s affairs for the next five years.

This followed his victory on Friday at a Constitutional Court which examined claims by his chief opposition at the July 30th elections, Nelson Chamisa of the Movement for Democratic Change (MDC) Alliance, that the electioneering process which produced him the winner at the poll was flawed.

Zimbabwe’s Electoral Commission (ZEC) had declared Mnangagwa winner of the July 30th Presidential elections held in the country, announcing he polled 50.8% of the votes.

But Chamisa had faulted the results released by the electoral body, and consequently dragged the case to the Constitutional Court to challenge Mnangagwa’s victory, describing the poll as “fraudulent and illegal.”

The primary opposition leader has continuously revealed his distrust in the electoral body to organize a free and fair election.

On Friday however, the Court in its ruling struck out Chamisa’s allegations for lacking sufficient evidence. “The application is dismissed with cause,” the Judge had held, upholding Mnangagwa’s victory at the poll.

It remained to be seen what Chamisa- who also rejected the Court ruling- has up its sleeve in the coming days.

The main opposition leader has vowed to exhaust legal and political options available to challenge Mnangagwa’s victory at the polls.

Local media sources report that the opposition leader has petitioned African Commission for Human and People’s Rights (ACPR) to challenge the incumbent President’s victory, having seen his allegations tossed out by the country’s Constitutional Court.

His petition to ACPR reads in part: “The MDC Alliance has instructed its local and international lawyers to immediately lodge a petition with the African Commission on Human and People’s Rights (the ACPR) otherwise known as the Banjul Commission to challenge the 24 August Constitutional Court (ConCourt) decision controversial validating Zec’s decision that Mnangagwa won the July 30, 2018, harmonised general elections.

“The grounds of the petition are based on the flagrant and multiple violations of the universal human rights of the voters and people of Zimbabwe by the current Zimbabwean regime and the ConCourt including the right to free and fair elections, right to a fair hearing before an impartial court, right to legal representation by counsel of choice, right against undue political interference and the right to be governed by a legitimate government.”

Meanwhile, Mnangagwa has promised Zimbabweans a better future during his inauguration ceremony. At the event which was boycotted by Chamisa, Mnangagwa said his administration would revamp the country’s economy by trawling radical reforms, saying “the creation of jobs, jobs and more jobs will be at the core of our policies.”

The President also assured Zimbabweans the committed to upholding constitutionalism, the rule of law and judicial independence while urging irate members of the opposition parties to place national interest over an individual and party interests, by forming a synergy with his government to steer the country to greater heights.  “The Zimbabwe we want is a shared one and transcends party lines,” the President said.

Mnangagwa also vowed to probe those who masterminded the various clashes that trailed the announcement of election results in the country and bring them to book.

About six people were reportedly killed during a violent clash between opposition supporters and army in Harare, the country’s capital.