Why The Times Anonymous Op-Ed Is Unsettling Trump White House 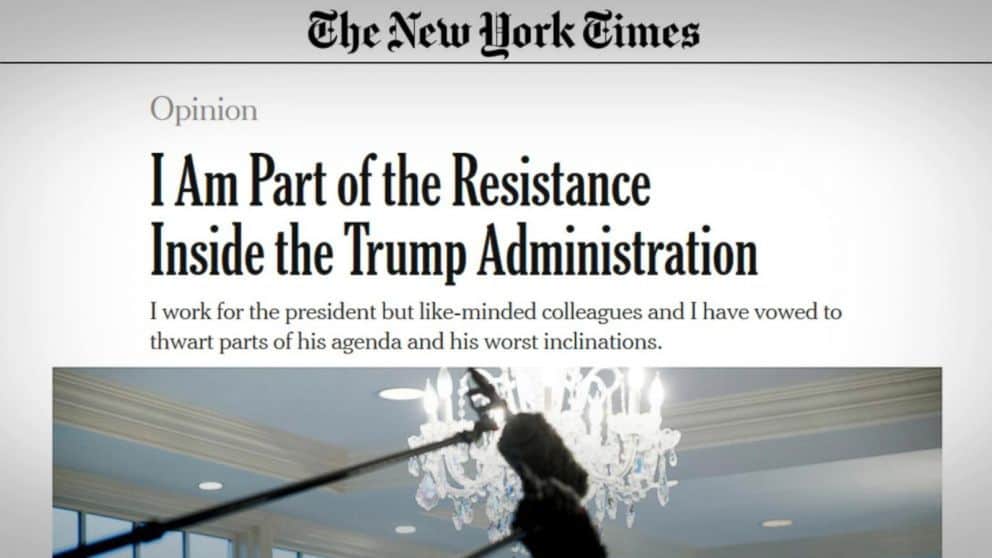 President Donald Trump told reporters on Friday that he wants Attorney General Jeff Sessions to uncover the identity of the senior administration official who published an anonymous op-ed in the New York Times earlier this week.

Trump is now obsessed with discovering the identity of the staffer who told the world the President is mentally unstable. Offering the nation real-time confirmation of the author’s most inflammatory claims, Trump appears more than visibly agitated in public. He’s expectedly unhinged, unnerved and he may be spiraling into the political abyss.

The only divided institution that keeps this babbling, angry, tweet-raging imbecile in high office is a morally bankrupt, GOP congressional majority.  Foreheads deep in the sticky, stinking, toxic muck of Trump’s now-entrenched, DC swamp, they have no choice but to acquiesce to the worst of Donald Trump’s seething impulse requirements and those of his dependable, if not sufficiently furious base.

While failing to legibly pronounce the word “anonymous” the president, who once insisted the United States only accept English speaking immigrants, further terrified amped up supporters at a Montana rally on Thursday.

A paranoid, conspiratorial delusionary or a borderline-stable, self-serving liar (or both) Trump told the crowd that a female, “deep-state” operative with a “secret” agenda is out to get him.

“The latest act of resistance is the op-ed published in the failing New York Times by, by an ‘anomonous’, it’s really an ‘anomonous’, gutless coward. You just look. He was…nobody knows who the hell he is, or she, although they put him, but probably that’s a little disguise. That means it’s she,” Trump postulated.

Trump added, “Unelected deep state operatives who defy the voters to push their own secret agendas are truly a threat to democracy itself.”

Responding to a reporter’s question aboard Air Force One on Friday Trump said Attorney General Jeff Sessions should open an investigation into the matter.

Trump certainly didn’t (or couldn’t) read the opinion piece in the New York Times and is wholly unaware that the only national security threat to be gleaned from its context is the ego-driven impulsivity of an id-driven, pre-adolescent chief executive.

Trump arrived in North Dakota on Friday for another, scheduled campaign speech. Ambitious enablers in his administration parade the “stable genius” about the nation like a popular carnival barker hawking a defunct traveling circus.

The abject, transparent absurdities of this public theatrics shine a hot spotlight on predictable, behind the scenes lunacy consistently occurring in the West Wing.

Just hours after the digitized version of Times opinion piece dwarfed all online and cable news content streams, the “witch hunt” began. It was time to immediately “out” the culprit!

In a coordinated and just, plain silly effort senior White House Officials drafted supposedly exculpatory letters. The eventual mishmash of documents drafted by stakeholders from Vice President Mike Pence, to Secretary of Defense James Mattis, to the always elusive and rarely well spoken Secretary of Energy Rick Perry, to Counselor to the President Kellyanne Conway and so on were abruptly printed and immediately delivered to the President’s desk.

The stupidity of the charade; the anonymous writer sees her/himself as a nation-saving patriot and made clear that he/she fully intends to remain active and incognito. If the author were capable of penning a New York  Times op-ed piece, it’s very likely she/he is capable of writing a believable deniability memo.

It’s unlikely any member of this impressibly inept administration is going to be able to determine the identity of the Trump proclaimed “nefarious” coward from documentation assessment. It’s very likely the “nefarious” coward is far more intelligent than her/his colleagues. After all, she/he has gotten away with it for this long.