How US-Europe Left Libya In Hell After Gaddafi Ouster 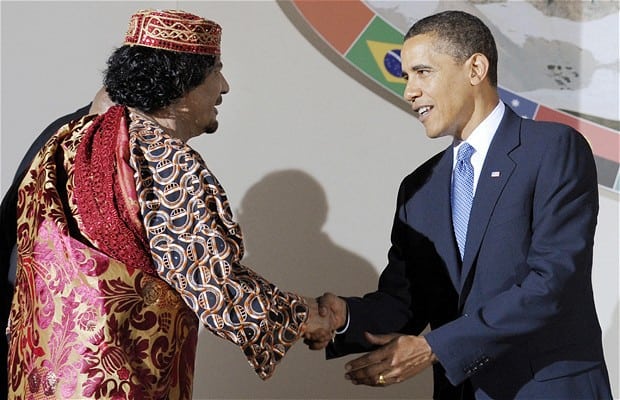 Failure to plan for an aftermath of Muammar Gaddafi by the then President Barack Obama US-led government and other forces who joined hands to oust Libyan leader has continued to hunt the country, seven years after Gaddafi was killed.

On April 11, 2016, former US President, Barack Obama, admitted that not preparing for a post-Gaddafi Libya was probably the “worst mistake” of his presidency. “Probably failing to plan for the day after, what I think was the right thing to do, in intervening in Libya,” the former President had said while answering a series of questions on the highs and lows of his time in office on Fox News.

And he was right!

The death of Gaddafi was believed to restore peace to a tumultuous Libya, but the pendulum of the aftermath of his death has swung far more catastrophic, a development least anticipated by few, if any at all.

The uncertainties hovering over the country since the demise of its long-term ruler, Muammar Gaddafi is getting thicker with each passing day. Since the ongoing civil war broke out in the country, Libya’s economy has nose-dived drastically, despite having the largest oil reserves of any African country.

The Libyan crisis kickstarted with Arab Spring, a series of anti-government protests, uprisings, and rebellions that spread across the Middle East in early 2011. The development was caused by factors such as population explosion, rising unemployment among youths in the region, quest to end aging dictatorships, widespread corruption among others.

The crisis started in Tunisia on December 17, 2010, when Mohamed Bouazizi, a street vendor reportedly set himself on fire after a local official allegedly confiscated his vegetable cart and humiliated him in the public. While there are many unanswered questions surrounding Bouazizi’s death, the development drew the ire of thousands of Tunisians who thronged the streets, alleging high handedness by then-President Zine El Abidine Ben Ali. Prior to the uprising, Ali has been in power for 23 years, but the violent demonstrations forced his exit from the country in January 2011 and consequently drew the curtain on his reign in Tunisia,

The success of the Arab Spring in Tunisian spread at a speed of lightning to five other Arab countries which include: Libya, Egypt, Yemen, Syria, and Bahrain, ending the reign of Egypt’s Hosni Mubarak, a strong figure among the Middle Eastern leaders.

Like other Arab countries, Libya was affected by the forces of the Arab Spring, ousting its age-long leader Muammar Gaddafi in a bloody civil war, leading to his death. Before his death, Gaddafi ruled Libya for 42 years, stretching from 1969 to 2011. After spearheading a group of vibrant Libyan military officers against King Idris 1 in a non-violent revolution and bloodless coup d’état, which saw the King abscond from the country, he became the de facto leader of the country on September 1, 1969. Under his watch, the Libyan Revolutionary Command Council (RCC), scrapped the monarchy system of government holding sway in the country and initiated the new Libyan African Republic, with the motto: “freedom, socialism, and unity”.

The RCC-led Gaddafi government trawled various reforms in the petroleum sector, taking control of it. The reward of the reforms soon began to yield results. His government was able to provide free public education and medical care to Libyans while the country’s per capita income in the country rose to more than US$11,000- the fifth-highest in the continent, as at that time.

In 2010 however, the effects of the Arab Spring reverberated in Libya, creating a sharp divide between Gaddafi’s government and rebel forces which formed a committee christened the National Transitional Council (NTC) on February 27, 2011, to serve as the temporary government in the region dominated anti-Gaddafi forces. On March 21, 2011, the North Atlantic Treaty Organization (NATO) backed the rebel forces, which eventually outmuscled Gaddafi taking over Tripoli, Libya’s on August 20, 2011, and subsequently led to his death in Sirte, his hometown on October 20, 2011.

The post-first Libyan civil war was characterized by the quest for dominance among anti-Gaddafi militias, who refused to lay down arms when the war came to a halt in 2011. Some of the rebel militias transcended their traditional role to one geared towards assuming more political relevance in the country and this led to other rounds of clashes among rival rebel groups. Weighing into the sporadic clashes among rebel groups, NTC had enjoined the various armed groups to register and unite under the Ministry of Defense, consequently placing them on government’s payroll, granting legitimacy to the majority of them. This, observers contend, encouraged the upsurge of more armed groups in Libya.

The unbridled quest for control of the territory of Libya by rival groups led to the country’s second civil war. The war was majorly between the government of the Council of Deputies, which was democratically elected in 2014 and internationally recognized as “the Libyan Government”, also known as the “Tobruk government”; and the rival Islamist government of the General National Congress (GNC), also called the “National Salvation Government”, based in Tripoli. While the Tobruk government wields essential control in eastern Libya, GNC’s maintains a stronghold in western Libya.

Various ceasefire haven has been reached since the war started in 2011, as a result of international interventions over the country’s seemingly unending war, but they have rarely been effective. The UN had in December 2015 brokered one of such ceasefires. In March 2016, the leaders of a new UN-supported “unity government”, arrived in Tripoli which saw the arch-rivals inked a peace agreement in December 2015, coming together to form the Government of National Accord (GNA) with a view to ending the lingering crisis, but then this has not yielded desired success as a result of differences of interests between the warring parties.

In July 2016, rival leaders reached an agreement to reunify the eastern and western management of Libya’s National Oil Corporation (NOC). In spite of these measures, peace is yet to return to the country.

Last month, the country again witnessed the resurgence of clashes with rival militia factions in the capital, Tripoli. Officials said some 47 persons have been killed in the violence while 1,800 families have been internally displaced. The violence has forced thousands of people to flee to nearby towns or seek shelter in other parts of the capital, while many more have remained trapped inside their homes.

BBC reported that the violence broke out last week when militias from a city to the south of Tripoli attacked southern areas, leading to fighting with local militias that support the internationally recognized government, the GNA.

The GNA has described the clashes as “an attempt to derail peaceful political transition” in the country, adding that it “could not remain silent over the attacks on Tripoli and its suburbs, which is a violation of security in the capital and of citizens’ safety”.

The UN last week announced that the rival groups have agreed on a ceasefire deal, but how far this will go remains a matter of time.

“Under the auspices of [UN envoy Ghassan Salame], a ceasefire agreement was reached and signed today to end all hostilities, protect civilians, safeguard public and private property,” the Unsmil mission said, according to a BBC report.

The report adds that: “the ceasefire also provides for the reopening of the capital’s only functioning airport, Mitiga, which has been closed since 31 August due to the clashes.”

The agreement “does not aim to fix all the Libyan capital’s security problems; it seeks to agree on a broader framework on the way to start addressing these issues,” the mission said.

The talks included military officers, leaders of various armed groups in and around the capital and the UN-backed Government of National Accord (GNA).

“This is the third attempt to end the outbreak of violence in Tripoli as the first two ceasefires were broken almost immediately. This time there’s a signed agreement mediated by the United Nations,” the BBC reports added.

Observers doubt the possibility of the recent ceasefire brokered by the UN, to end the country’s lingering crisis considering the failure of similar attempts in the past. Many argued that until the underlying issues that triggered the crisis are addressed, the situation would linger for more years.

“If the ceasefire holds, it will be a short-term fix because the underlying issues that drive these bouts of deadly militia violence in Tripoli are rooted in governance and institutional issues that could take years to overcome. But this ceasefire only buys them time.

“Every government that has come and gone, whether backed by the international community or not, has legitimized these competing armed groups on and off, including all those involved in the fighting this past week,” says BBC’s Rana Jawad.

The recent violence in the country has been condemned by international communities.  UN Secretary-General Antonio Guterres has said the “indiscriminate use of force is a violation of international humanitarian and human rights law” and has urged “all parties to grant humanitarian relief for those in need”.

On Saturday, the US, UK, France, and Italy called for an immediate end to deadly violence in Libya’s capital.

A joint statement said attempts “to weaken the legitimate Libyan authorities and hinder the ongoing political process are not acceptable”.

“We are calling on the armed groups to immediately stop all military action and warn those who seek to undermine stability, in Tripoli or elsewhere in Libya, that they will be made accountable for it,” the joint statement read.

However successive attempts at a truce have so far failed to stop the fierce fighting between several militias.

Italy had on Monday, blamed France for the ongoing Libyan crisis, alleging that its military intervention in 2011 in alliance with other nations against Gaddafi.

France Defence Minister Elisabetta Trenta had written on Facebook on Monday: “France, from my point of view, is partly to blame. It is clear now undeniable that this country (Libya) finds itself in this situation because someone, in 2011, put their own interests ahead of those of the Libyan people and of Europe itself.”

The Minister’s comments came shortly after Italy’s parliamentary speaker Roberto Fico called the situation in Libya “a serious problem which France has left us”.