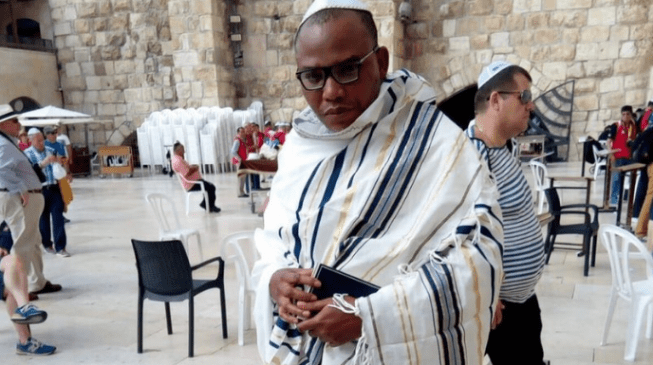 Nnamdi Kanu, the Leader of the Indigenous People of Biafra,(IPOB) allegedly missing, has maintained that the group’s quest to secede from Nigeria remains unchanged, noting that “it’s referendum or nothing else.”

The IPOB leader stated this during his first public broadcast on Radio Biafra which kickstarted by 6 pm on Sunday.

Speaking during the live broadcast monitored by our correspondent on ‘Radio Biafra’ Facebook page, Kanu explained that his decision to abscond from Nigeria was based on the increasing persecutions and attacks against him by the country’s government and the failure of relevant institutions such as the judiciary to protect him.

He vowed not to return to the federal high court in Abuja, the nation’s capital, where he was standing trial before he left the country

His words: “Two jets were hovering over, and they stormed the compound, and I sustained several injuries, and in the process of trying to defend me, 28 men fell.

“The sole purpose of that evil dance was to kill members of my family and me. They didn’t want me to go to Abuja because they didn’t have any case against me. They were afraid they would be disgraced before the world. They decided to eliminate me instead. They know if I go to court, that very country will not be the same again.

“I am Nnamdi Kanu; no mortal flesh can kill me. They have not given birth to that very person. Since they didn’t want me to come to court, I shall come back to Biafra land. There is nobody who can accuse IPOB of engaging in any form of lawlessness. I am in Israel.

“This same court that granted me bail stood by and watched as the army disobeyed the court order. The army in contempt of court came to kill me.

“I was in my home preparing to go to Abuja for my case when they came to kill me. They even killed Jack, our dog. They killed my cousin, Adaku and 28 others. The notion that I jumped bail is a fallacy, a lie, and deceit. It is untenable in law.”

Kanu went on to declare that he has returned fully, saying “I have returned full-time and I am coming home, and I will bring hell with me.”

“We will not relent till referendum is conducted. We stand for the truth. It’s referendum or nothing else,” the IPOB leader added.

Recall that Kanu, who was based in London, UK, was arrested alongside three others on October 14, 2015, in Lagos. The federal government had charged him with treason but Binta Nyako, a judge of the federal high court in Abuja, on May 5, 2017, granted him bail after 18 months in detention on health grounds and adjourned the matter to November.

However, before the adjourned date arrived, Nigerian security forces and Kanu-led IPOB had engaged in various clashes, leading to the disappearance of the group’s leader.

Since then, the whereabouts of the IPOB leader had kept many in the dark, with some unverified sources claiming he had been killed.

The Nigerian government christened IPOB a terrorist organization, a tag the U.S, Germany and other countries flawed.

The judge has since frowned at Kanu’s disappearance and blamed his sureties for Mr. Kanu jumping bail.

But on Friday, Kanu, who has been at the forefront of calls for the actualization of the Independent State of Biafra, resurfaced in video footage in Israel where he was seen praying, 13 months after he reportedly disappeared into thin air.

His lawyer, Ifeanyi Ejiofor, who had repeatedly accused the Nigerian Army of his client’s disappearance, confirmed the video, saying he had received a direct statement from Kanu saying the video was not doctored.

The emergence of the IPOB leader has continued to heat Nigeria’s polity, with many questioning the timing of his reappearance. Nigeria will hold its crucial general elections next year, and some are already alleging the IPOB leader’s return was not unconnected to it.

On Saturday, Nigeria’s erstwhile Aviation Minister claimed Kanu had agreed to work with him and other associates to oust incumbent President Muhammadu Buhari.

“I just received a call from my brother Nnamdi Kanu. I am delighted that he is alive and well. I commend his strength and courage even as I marvel at the loyalty, resilience, and commitment of his lawyer, Ifeanyi Ejiofor, and IPOB. We have agreed to work together to VOTE Buhari out,” the former minister who is a fierce critic of Buhari said via his Twitter handle @realFFK.