South Sudan: Why Machar Return Is A Boost For Ongoing Peace Efforts 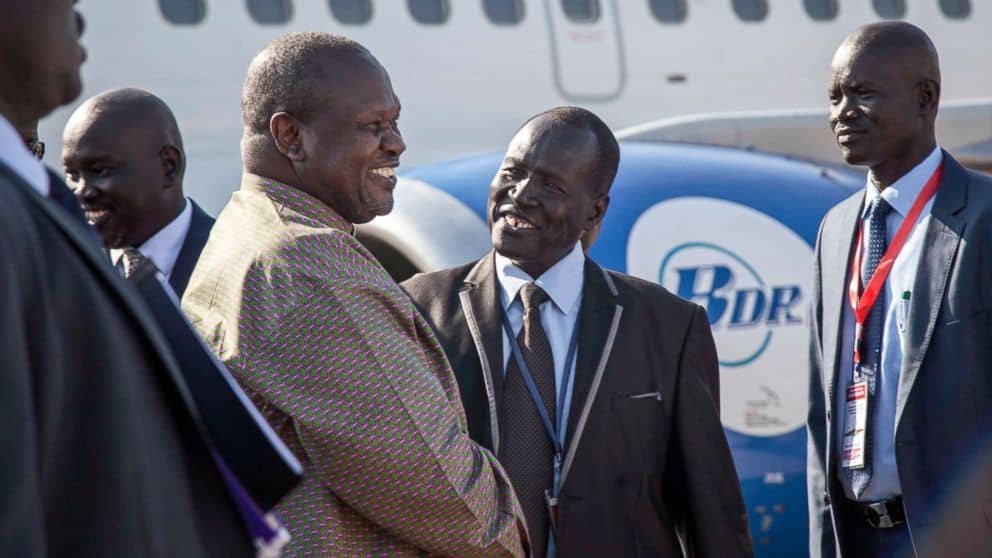 South Sudan’s main rebel leader, Riek Machar made a historic return to Juba, two year’s after he exited the capital, a development many see as a positive move in the ongoing efforts to restore peace to the crisis-ravaged country.

Riek Machar, South Sudan’s chief rebel leader, is back. His historic return to Juba, the capital on Wednesday, two years after he fled, is seen by many as a watershed in the ongoing efforts to permanently return peace to the tumultuous country.

Machar fled Juba in July 2016 after a fight broke out between his bodyguards and government soldiers in the capital following a failed peace deal.

Lam Paul Gabriel, a spokesman for the rebel leader, in a statement on Tuesday, disclosed his principal’s proposed return for a peace ceremony organized to officially welcome the most recent peace agreement, which was approved in August before being signed in Ethiopia’s capital, Addis Ababa.

“Machar will lead a delegation of the SPLM/A-IO (Sudan People’s Liberation Movement In Opposition) members for the peace celebration in Juba, but the programme in Juba is entirely in the hands of the regime,” the statement had read in part.

The statement, heavily riddled with a strong commitment for ending the five-years of unrest in the country added: “We are worried for his security in Juba, but the truth is here: we are for peace, and what we are trying to do is build trust. So that is why he is able to leave his forces behind and go with politicians.”

Many South Sudanese nationals would be gladdened the outcome of the highly publicized ceremony matched expectations.

South Sudan’s political crisis started in 2013- barely some months after its independence from Sudan following a broken relationship between President Salva Kiir and his then deputy, Machar. President Kiir had then accused Machar of plotting a coup to oust him from power.

The frosty relationship between the two had snowballed into a major crisis. Various peace-deals had hardly seen the light of the day, primarily as a result of the inability of warry parties to arrive at an agreed power-sharing formula favorable to the different groups. In August 2015, a similar ceasefire deal was signed by the two East African bitter rivals but did not stand the test of time, collapsing in July 2016, following an outburst between the two in Juba, South Sudan’s capital.

The crisis has taken a massive toll on the country since it began in 2013. Tens of thousands of people have reportedly died while millions of people have been displaced, with no hope of survival. South Sudan’s economy has also fallen down the pecking order as a result of the war. The country’s economy relies heavily on oil, one of its most significant resources, but has continued to record stunted growth over the political instability rocking it. This has resulted in widespread poverty among its populace.

In August, however, the warring parties finally reached a significant power-sharing deal, a significant reason many pundits see as being responsible for previously failed arrangements. The August deal, which was the 12th ceasefire and second power-sharing agreement in the country since the unrests kickstarted in 2013, however, seemed to be bringing about rays of lasting peace in the country.

The power-sharing deal, designated 35 ministers in the bloated transitional government, including 20 Kiir allies and nine backers of Machar along with representatives of other rebel factions. It also proposed that Machar would return to a unity government as the first of five vice presidents, a position he quitted earlier when things went sour between him and Kiir.

During the peace ceremony held to commemorate Machar’s historic homecoming and to further strengthens the push for peace in the East African nation, on Wednesday, President Kiir apologized to South Sudanese citizens over the ruin the five years of conflict has caused the country.

“As your president, I want to apologize on behalf of all the parties to the conflict as leadership requires acceptance of responsibility,” Kiir told a large crowd gathered at the John Garang Mausoleum for celebrations marking the signing of a revised peace deal last month.

“Those of us who considered ourselves leaders must accept the blame collectively and solemnly promise our people never to return them to war again,” said Kiir.

Observers are optimistic that with the parties involved in the conflict seemingly demonstrating some level remorse and sincerity, the country may be on its path to accurate restoration.

“One of them is called James Gadtet. We will release him although he was condemned in court,” said Kiir of his former deputy’s spokesman.

Kiir’s promise shows the level of progress recorded in the ongoing peace efforts, given that such would have been impossible in the past. In what seemed like a national charge, the president also urged citizens and all security agencies to welcome Machar and all other opposition leaders back to the country, noting that their presence “is a very strong testimony and proof to all that war is ending, and a new era for peace and prosperity is breaking.”

He had said: “In the spirit of promoting peace and stability in our beloved nation I ask you all in welcoming and congratulating Dr. Riek Machar and all the opposition leaders who have shown their commitment to the peace agreement by coming to celebrate with us here today in Juba.”

On his part, Machar, while addressing thousands who attended the event assured them of his commitment to finally restoring peace to the country, citing his return to Juba as a demonstration of his sincerity to the latest peace deal signed in Khartoum on September 12, reported by CARACAL REPORTS.

“Why are we here today? If we come after eight months, some of you will say we don’t want peace. We want peace. Our heart is on peace like you,” the rebel had said.

Machar is to be reinstated as first vice president in South Sudan’s next government, a transitional government. While the new arrangement, an interim government- which is extensive and capital-intensive- seemed to be a lasting solution to the five years of crisis that rocked the country; many are worried about the financial wherewithal to sustain it.

Commentators believe the country’s plummeted economy may not be able to cope with such arrangement. “The country is already economically unstable, and people go for months without salary, and it will take a while for this country to establish. We now have a small government but later we are going to have a bigger government, and the resources will all go to maintain the bigger government with little to go for the citizens,” Beatrice Abe, a member of South Sudan’s parliament was quoted as saying by Voice of America (VOA).

Whether the country can successfully operate a transitional government, given its critical economic state or not largely remains of little concern to thousands of South Sudanese citizens at the moment, with rising optimism that the recent peace ceremony would heal the many years of wounds caused by the conflict.

Dusman Joyce, chairwoman of the Women’s Caucus in the National Parliament, said the leaders must show a real commitment to ending the war.

“After this celebration, in a few months we need to see that there is free movement of people and humanitarian aid, we need to see the return of the refugees and people are given freedom of speech so that people see that this peace is signed in spirit and letter,” Joyce told South Sudan in Focus.