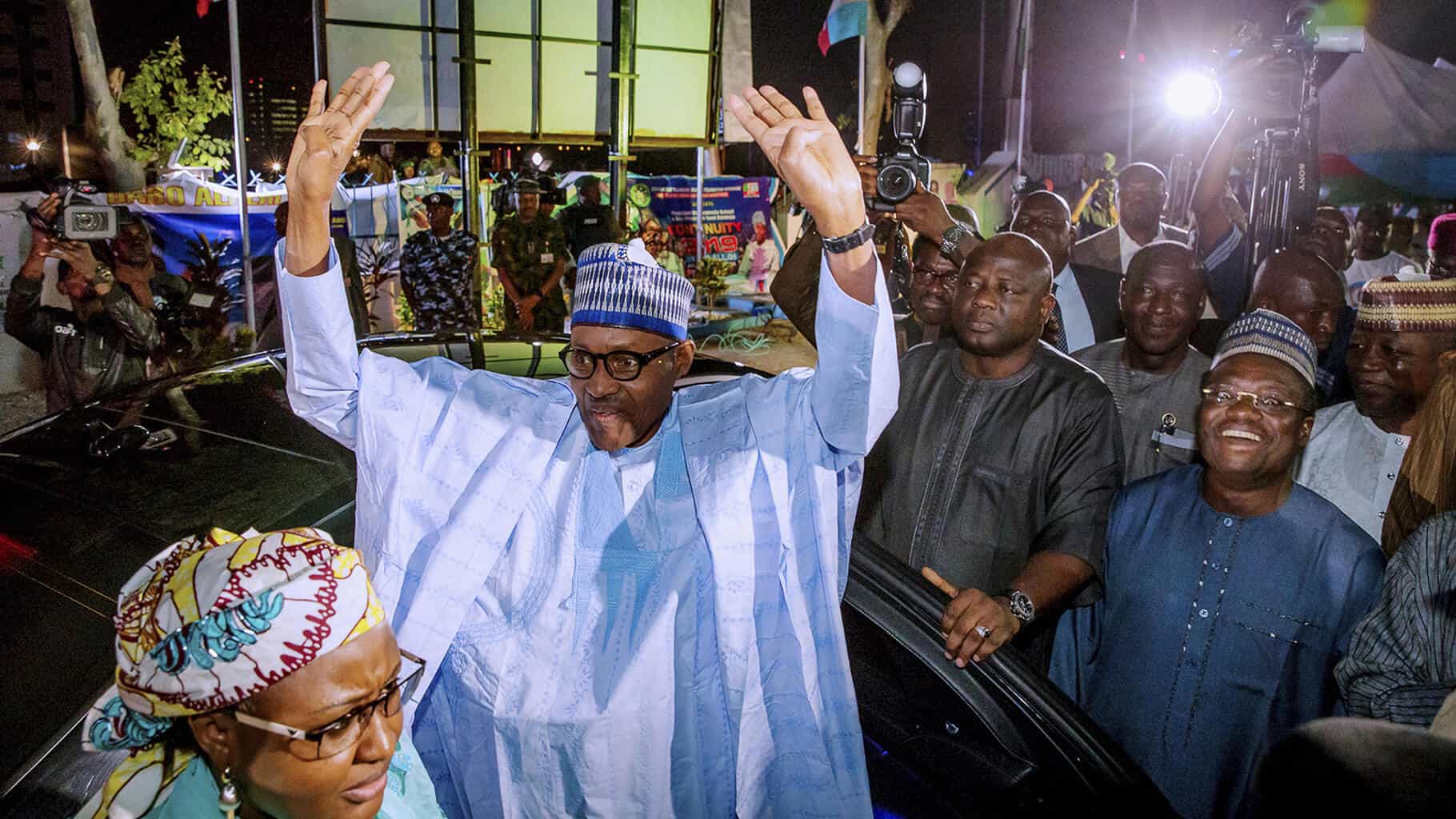 Re-election victory of President Muhamadu Buhari was reaffirmed on Wednesday tribunal sitting in Abuja, Nigeria. The Tribunal while dismissing the petition filed by the opposition candidate Alhaji Atiku Abubakar, and his party, rule that the evidence presented by the opposition lacks substance. So far, the President’s victory is likely to hold for now, regardless of claims of electoral malpractices during the February 2019 polls.

At the end on Wednesday’s tension-soaked, lengthy verdict, many Nigerians were not surprised because the people saw it coming.

The PDP presidential flagbearer, Atiku Abubakar had gone to court to challenge the election victory of Buhari held in February, alleging irregularities. CARACAL REPORTS had earlier reported how the election results announced by the country’s electoral body, the Independent National Electoral Commission (INEC) showed that Buhari of the ruling All Progressives Congress (APC) garnered 15, 191, 847 votes to defeat Atiku, his fierce rival during the polls who polled 11, 262, 978 votes.

But unsatisfied with the result, Atiku, an erstwhile Vice-President, had approached the court, praying it to nullify Buhari’s election victory. He had among other things in the petition cited Buhari’s lack of qualification, harassment of electoral officials during the elections, electoral malpractices and INEC’s denial of an existing server during the election as grounds for voiding Buhari’s victory at the polls.

According to the tribunal, some of the allegations raised by the petitioners such as “none holding of elections in some polling units, cancellation of results, over-voting, inflation and deflation of votes among other things,” were found wanting in concrete evidence.

“The petitioners have a duty to prove all the allegations which are criminal in nature beyond reasonable doubt. The petitioners pleaded that so many of their agents were situated in various polling units and that members of the first respondents connived with security agents to conduct massive rigging.

“They also alleged that no real voting took place in Dekina local government area, among others. Like I had mentioned, there is no admissible evidence to link the witnesses with the allegations of non-compliance to the electoral act or of corruption,” the tribunal ruled.

In an expected reaction from the PDP, the party had faulted the tribunal’s judgement, accusing the court of twisting the facts laid before it. In a statement issued by the opposition party through its spokesman, Kola Ologbondiyan, the PDP described the tribunal’s verdict as “provocative, barefaced subversion of justice and direct assault on the integrity of our nation’s justice system.”

The statement reads: “The PDP finds as bewildering that a court of law could validate a clear case of perjury and declaration of false information in a sworn affidavit, as firmly established against President Muhammadu Buhari, even in the face of incontrovertible evidence.

“The party is also rudely shocked that the Tribunal took over the roles of the Respondents’ lawyers who clearly abandoned their pleadings by refusing to call evidence in defense of the petition.

“The court raked up all manner of excuses to make up for the yawning gaps occasioned by the total absence of any evidence from the Respondents.

“Nigerians and the international community watched in utter disbelief when the tribunal ruled that one need not provide a copy or certified true copy of educational certificate such individual claimed to possess, contrary to established proof of claims of certification.

“The party notes as strange that the court even went ahead to provide rationalisation in favour of President Buhari even when all hard facts before it shows that he did not possess the claimed educational certificate and that the Army was not in possession of his WAEC certificate as claimed in the affidavit he deposed to in his Presidential nomination form.”

The opposition party, expectedly, stated it would be further challenging the tribunal’s verdict at Supreme Court, the country’s apex court, expressing optimism of getting favorable judgement there.

As it stands, it looks unlikely President Buhari would have his election victory upturned at the Supreme Court, should the opposition party finally decide to push its course to the apex court. Nigeria’s judiciary has come under increased scrutiny and increased attacks from critics who consider it as a compromised arm of the government.

Such criticisms further thicken with the dismissal of immediate past Chief Justice of Nigeria (CJN) Justice Walter Onnoghen and his consequent instalment of Justice Tanko Muhammad, considered by many as the president’s loyalist, as replacement.

In a scathing editorial, one of the country’s fiercest newspaper had lampooned the President’s arbitrary dismissal of Onnoghen, noting such further shows Buhari is a dictator with no regard for the rule of law.

“Unilaterally and in flagrant violation of the Constitution, he also swore in Tanko Muhammad as the new acting CJN. By this act, the President has precipitated needless confusion in the polity. A shocking action, it will aggravate tension ahead of the general election in February and March. This poses a great peril to our democracy,” the editorial had read in part.

“How do dictators hold onto power? James Tilley, a professor of politics at Oxford University, says the totalitarian tyrannies of Stalin, Hitler, Mao, Pol Pot, and others relied largely—although not exclusively—on mass terror and indoctrination. Nigerians must see through Buhari. He wants to convince the public that he is fighting corruption, but his hidden agenda is to institute an autocratic regime.  Nigeria’s democracy can no longer be considered to be out of harm’s way. After close to three decades of brutal military dictatorship, the country deserves the right to enjoy her hard-earned democracy in peace. Nobody else can defend it but Nigerians themselves. It is, therefore time for the civil society to rise and nip in the bud what is turning out to be a gradual but seemingly inexorable descent into a full-blown dictatorship.

“Just about two decades after Sani Abacha, Nigeria is, once again, in the grip of tyranny. The descent into the abyss of dictatorship must be stopped. This is the height of lies, denials and impunity that define Buhari’s three and half years rule. To restore sanity, rebuild trust in our fragile democracy, the President should swiftly reverse the dangerous violation of the 1999 Constitution, which he swore to uphold on assumption of office in 2015,” the newspaper had concluded.

Why Buhari’s election victory will hold, regardless

Concluding Buhari is unlikely to lose his mandate even at the Supreme Court seems putting the cart before the horse, yet it is a reality many Nigerians are gradually coming to terms with. Most of the post-election debacle between Buhari and Atiku has largely been interpreted through the lens of what transpired during the 2015 elections when then incumbent President Goodluck Jonathan conceded defeat to Buhari of the APC.

However, indications so far, shows a repeat of 2015 experience is looking impossible at the tick of every second. Some commentators observed that Buhari’s decision to replace Justice Onnoghen with Justice Tanko- just few weeks to the general elections- and his consequent refusal to assent the Electoral Act 2018 amendment bill– which would have ensured credibility at the polls were calculated moves by the APC to address post-election petitions.

“ALL hopes of inculcating credibility into the electoral system now hang delicately in the balance. Controversially, President Muhammadu Buhari has refused to assent to the Electoral Act 2018 amendment bill, which was passed by the National Assembly and forwarded to him last November. His obduracy, which has triggered a political storm, gives the impression of delaying tactics, and pushes the 2019 general election into uncertain territory,” a local newspaper had stated shortly after Buhari again refused to sign the Electoral Act bill.

The PDP’s rage here and there is not unexpected of an opposition party to maintain its relevance and spot inadequacies of the ruling party. However, with Buhari’s loyalist holding sway in the National Assembly and Judiciary, it is becoming almost an unrealistic dream for the opposition party and his candidate, Atiku to hope for a victory against the incumbent President.