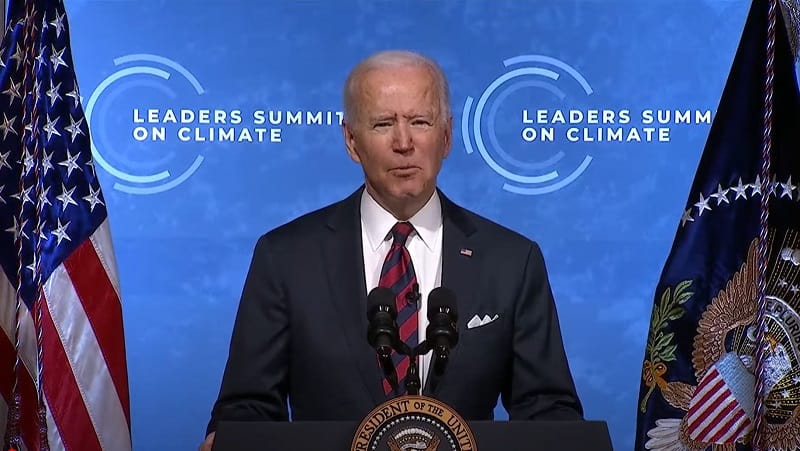 President Joe Biden announced a new robust plan to combat climate change during a two-day virtual summit on Thursday, coming after four years of inaction on the matter by the Trump administration. Biden called climate change “the existential crisis of our time” and urged other world leaders to take similar steps in reducing its impact.

At the summit, the president announced that he pledges to cut U.S. greenhouse gas emissions by at least 50% by 2030. This goal is far more aggressive than the country’s previous commitment when the Obama administration vowed to cut emissions by 26% to 28% by 2025. As of right now, the U.S. is not even halfway to reaching that target.

Despite this, President Biden seemed optimistic that global cooperation could successfully combat climate change and even lead to economic prosperity.

Brazil President Jair Bolsonaro walked back previous refusals to aid the fight against climate change, vowing Thursday to achieve carbon neutrality by 2050. President Bolsonaro also pledged to end illegal deforestation in the country by 2030, so long as the Biden administration pays Brazil $1 billion to do so.

Japanese Prime Minister Yoshihide Suga also set new goals to combat global warming. The nation is pledging to curb emissions by 46% by 2030, a significant increase from the previous goal of 26% by that date. Japan, like the U.S., also committed to a goal of net-zero emissions by 2050.

“Russia is genuinely interested in galvanizing international cooperation so as to look further for effective solutions to climate change as well as to all other vital challenges,” Putin said Thursday.

President Xi Jinping reiterated China’s previous commitments to reduce carbon emissions and achieve carbon neutrality by 2060. China is the largest carbon polluter of any nation on Earth, with the United States being the second largest. The two countries alone contribute nearly half of all carbon emissions in the world today.

Japanese Prime Minister Yoshihide Suga also pledged to more aggressively curb their carbon emissions, committing to 46% by 2030 from their original goal of 26%. Japan shares the target of net-zero emissions by 2050 with the United States. As the fifth largest emitter of carbon pollution, Japan’s new goal should make a significant impact in the fight against climate change.

“We must take action now. Because there’s no vaccine against a polluted planet,” Trudeau said at the summit. “We will continually strengthen our plan and take even more actions on our journey to net-zero by 2050.”

President Moon Jae-in says South Korea will no longer fund the construction of coal power plants in other nations. South Korea has faced international criticism for its persistent investment in coal plants abroad, even as it phases out the use of coal in their home nation. Moon said South Korea will release a target for reducing emissions by the end of the year that will be more ambitious than the previous goal of 24.4% reduction by 2030.

Overall, 40 world leaders were invited and participated in Biden’s climate meeting. President Biden was praised by several nations for hosting the summit, particularly after the Trump administration’s exodus from the Paris Climate Accord and halting of federal efforts to reduce emissions.

Prime Minister Trudeau said that it is “great to see America re-engage. I think certainly there were things that were more challenging under the previous administration in terms of moving the dial in the right direction on the international stage.”

“I’m delighted to see that the United States is back to work together with us in climate politics,” said German Chancellor Angela Merkel, who had a notoriously touchy relationship with former president Donald Trump. “Because there can be no doubt about the world needing your contribution.”

Day 2 of Biden’s summit continued on Friday, as several keynote speakers explained economic and technological innovations to achieve these new, more ambitious climate goals. Billionaire philanthropist Bill Gates called for new public and private investment in these innovations to meet these global targets. Secretary of Transportation Pete Buttigieg shared the goals of the American Jobs Plan, which is aimed at creating new jobs in American infrastructure and green energy.

“When we invest in climate resilience and infrastructure, we create opportunities for everyone,” Biden said.