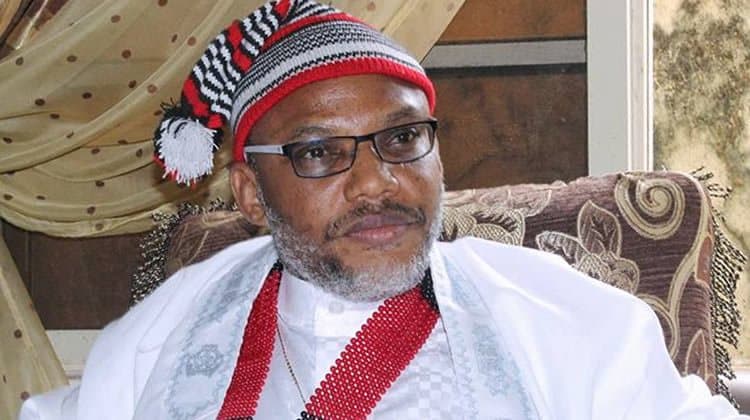 Prominent South-East elders and chieftains will be having another private session with the detained leader of the Indigenous People of Biafra, Nnamdi Kanu, in the custody of the Department of State Services, CaracalReports has learnt.

The elders would be meeting Kanu in the coming week, which is the week before the continuation of his trial on January 18, 2022, before Justice Binta Nyako.

Sources told Caracal Reports that the emergency meeting with Kanu was based on President Muhammadu Buhari’s insistence that Kanu must face court trial and he (the President) could not release him.

“We are going to meet Kanu again in custody. He is our son and we have to fight it through with this government until they release him. This is democracy and not dictatorship. Buhari cannot be greater than a people and their voice. The lawyers are already sorting out the day we will ee Kanu,” one of the sources said.

On Thursday, Ifeanyi Ejiofor, the lead lawyer of Kanu had his routine visit in the custody of the DSS headquarters in Abuja on Thursday.

In the statement sent to CaracalReports, the legal counsel said he was not worried by Buhari’s statement that Kanu should defend himself in court.

Ejiofor said all these in reaction to Buhari’s position during his interview with Channels Television on Wednesday.

The statement by Ejiofor read, “We visited our most revered Client today as routinely guaranteed by the Court protocol at the DSS. Interestingly, a number of engaging developments were discussed including yesterday’s stereotyped response  by the President of the Federal Republic of Nigeria (FRN), on issues relating to a political solution in our Client’s case.

Also Read: I can’t wait to leave the office; age not on my side again – Buhari

“We were not one bit perturbed by his response knowing fully well that they have no case against our Client.

“What we are earnestly asking for is nothing else, but for the executive arm of Government led by the President of the FRN, to desist from further interfering in the judicial process. We can authoritatively confirm to the World that the executive arm of the Government of the FRN, ably led by the President is gravely and effectively interfering in our Client’s judicial proceedings.

“To demonstrate good faith and impartiality, we beckon on the President of the FRN to first caution the DSS which answers solely to him, to obey all Court Orders as it relates to the management of this case.

“Our Client, Onyendu Mazi Nnamdi Kanu should not be detained in solitary confinement (which is an act of torture) in the custody of the same Agency accusing him of committing sundry offences and expect fair hearing. Hence, there is no independence of the judiciary as far as this case is concerned, and the President of the FRN is fully aware of this.

“If it is the position of the President of the FRN to allow fair hearing, he should follow up and ensure its reality, most promptly.”

Ejiofor urged Kanu’s lawyers to be vigilant in their daily activities as abduction of innocent citizens persists in South East.

“In view of the ongoing and incessant abduction and/or disappearance of numerous innocent citizens in the south east, Onyendu Mazi Nnamdi Kanu, admonished all and sundry, particularly his followers/supporters, to be wary, vigilant and circumspect at all times, particularly as it relates to calls and contacts from unknown persons.

“Onyendu as usual, sends his appreciation to all his ardent followers who have remained undaunted and defiant against all odds.

” Thank you and remain blessed, UmuChineke,” he added.