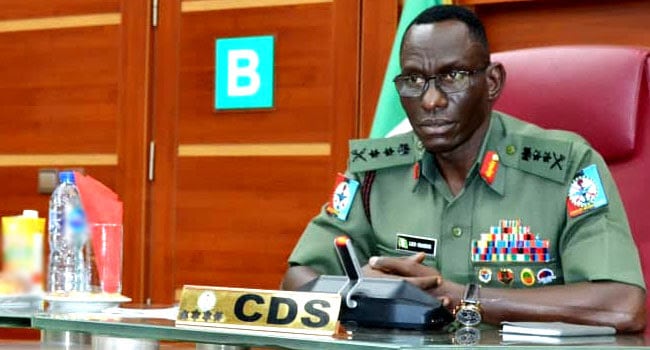 The Nigerian Chief of Defence Staff, Lucky Irabor has said the Military is ready to clear out the bandits terrorizing the country.

He said the official declaration of the group as terrorists by the Federal Government had given the military a go-ahead to eradicate the terrorists from existence.

Irabor who spoke in a programe on NTA said the military had been awaiting the pronouncement to deal with the group mercilessly.

He added that the armed forces would now change tactics to destroy the terrorists totally.

According to Irabor: “The issue of gazetting the bandits as terrorists is a news that is quite gladdening. That has always been what we had desired.

“What it means is that our tactics, techniques, and procedures that we use in handling them certainly would have to change and that is why, I believe going forward, I am sure you will be reading what the outcome of those engagements are.

“Gazetting them as terrorists give it a global disposition that will enable other key global actors to now take certain action against them. For me, it will only get better, and we will give them the bloody nose that they so desire.”

Recall that the Attorney General of the Federation, Abubakar Malami had announced the gazetting of bandits as terrorists.

The pronouncement is expected to help the country take some decisions that would bring an end to the reign of the bandits terrorizing some parts of the country.