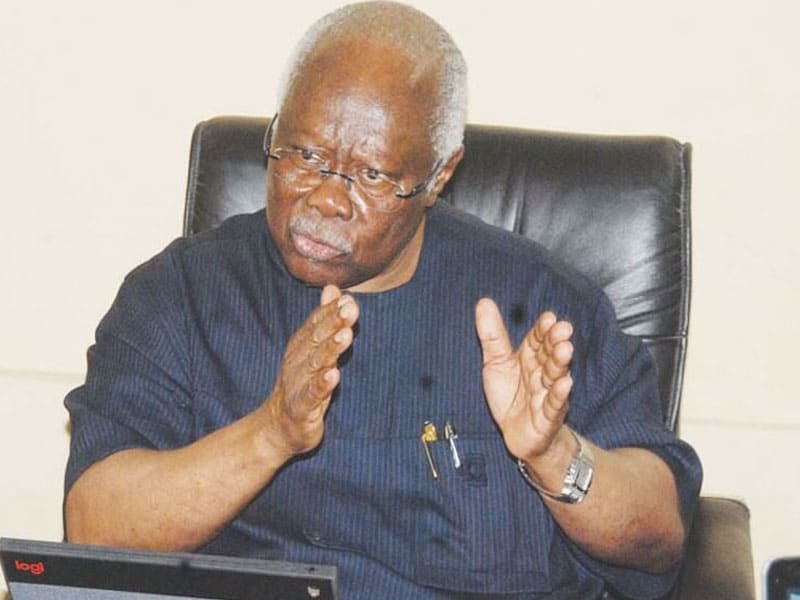 A former National Vice-Chairman, South-West zone, of the Peoples Democratic Party (PDP), Bode George, has described as an insult, the presidential ambition of National Leader of the All Progressives Congress, Bola Tinubu.

He, however, said the former Lagos governor, Tinubu has a right to make his intentions known.

While speaking on ‘The Morning Show,’ a programme on Arise News, he said while he harboured no sentiments against Tinubu, there were some facts he knew about the former Lagos governor.

Speaking further, he alleged that the APC leader appropriated all the resources of Lagos State for his personal use when he governed the state.

He said, “We should have people whose character is sellable anywhere in the world.”

He added, “In a civilised society, democracy is so vital and it’s important to do whatever it takes to make it succeed. Looking at his past and all he has done, his wanting to run for president is an insult to us.

“My party is ready and it will not be a dog fight as we centre ourselves on justice, fairness and equity.”

George who described next year’s presidential election as a matter of life and death for the nation called on Nigerians cast their votes in the 2023 elections for only credible persons.

He also used the platform to plead to the media to be on top of their game, stating that this year would be critical for the future of Nigeria.

He also revealed that persons who are completely dissatisfied with the APC in Lagos would be joining the PDP in the coming days.

The political also condemned the Buhari government on the issue of indirect primaries, arguing that direct primaries would ensure transparency in any given election.

Fielding questions about his political party, the PDP chieftain, however argued that even though they disagreed on some issues, they had a culture, norms and methodologies by which they managed themselves in the opposition party.

Reacting to claims that he was jealous of the APC leader, he clarified the air stating that he had no personal vendetta against him, maintaining that the day of reckoning for him would definitely come.