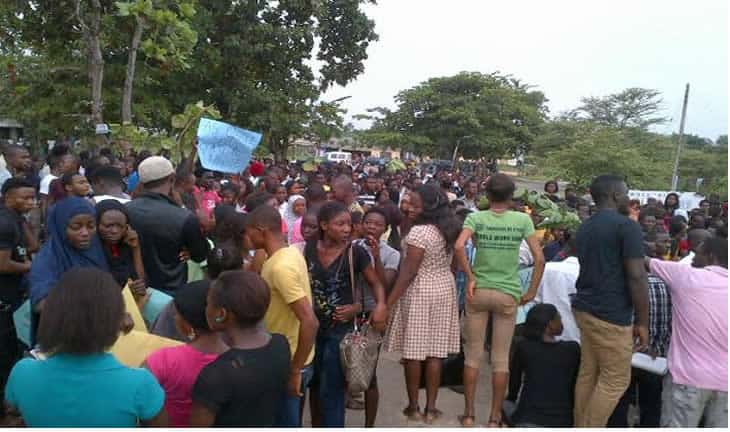 The Joint Campus Committee of the National Association of Nigerian Students (NANS) has condemned the management of the Adekunle Ajasin University, Akungba Akoko for instructing students to pay a total sum of N20,000 as a “reparation fee” before the school would be reopened and allowed to continue academic activities.

In a statement signed by its Chairman, Comrade Omotoso Surprise and Secretary, Comrade Akinola Elijah Temitope, Ondo NANS JCC described the fee as obnoxious and as a heavy tax on parents who are still battling with unpaid salaries and wages.

The association said the levy slammed on the students is unfavourable and anti-student.

“In regards to the recent circular been published by Adekunle Ajasin University management in response to the violent protest participated by some few students which were penetrated as a counter-reaction to the institution “No School Fee, No Exam Policy” in the last postponed examination schedule,” the association said.

“It is obvious that the school management in their recent published direction on the procedural route of reopening the institution and making the students learn their lesson had no considerable influence as demonstrated by the unbearable and unaffordable amount of twenty thousand naira (20,000) the payable amount by each student as a means to right the wrongs penetrated by some few students during the protest.

“As a concerned body, we stand against the institution directive as it is too harsh and unfriendly. The subject matter of the protest was the inability of the majority of the students to meet up with their school fees payment, now to think of this newly published directive of the management that each student must pay Twenty Thousand Naira (20,000) and other significant conditions, meanwhile during the intra campus tour of the adhoc panel set up by the institution, it was seen that what was damaged during the protest are not up to ten million naira (10,000,000 naira).

“It is expected of the school management to be a leading role model in the dispensation of fair judgement and equity, as the school remains the root and stem of the personality of the students she produced in the outer world.

“In the past, the school has demonstrated maximum tolerance and civility, as a body, we will seek to enjoy more of the civility by the institution to help ameliorate or better still, be more considerate to their dispensation of fairness to the students.

“Consequently, we beseech all AAUAITES and the entire University community to keep calm as all hands are on deck to address the pertinent issues on ground.”