Southern, Middle Belt Leaders give condition to participate in 2023 elections 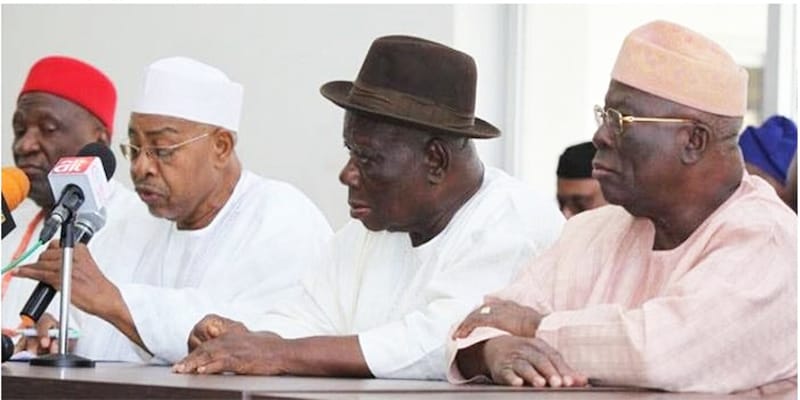 The Southern and Middle Belt Leaders’ Forum have revealed the condition to participate in the coming general elections in 2023.

According to them in a meeting held in Abuja, they would not support any political party that field a northern candidate for the position of presidency.

In a communique issued at the end of the meeting and signed by the leaders, the groups said the country was in dire need of urgent restructuring.

Buhari Is Strict, Unbending On Issues But Not Wicked To Nigerians – Femi Adesina

They also maintained that power must move to the Southern region after the reign of President Muhammadu Buhari if they would participate in the coming elections.

Parts of the communique read “Arising therefrom, the meeting resolved as follows: “That the extant Constitution and Structure of Nigeria are grossly flawed and lopsided, accordingly, Forum restates its demand for the fundamental restructuring of the country by enacting a new Constitution that would enthrone equity, fairness, and justice.It must be One Nation, One System;

“Cites that the northern part of the country would have fully enjoyed the Office of the Presidency of the country for the full statutory period of 8 years by 2023, hence, the presidency should rotate to the South;

“Therefore, unequivocally, and in full resolve, call on all political parties in the country to zone their presidential tickets to the south;

“Advices that any political party that does not zone its presidential ticket to the South should not expect support from the four regions;

“Notes that the basis of any viable democracy, especially in a diverse and complex country such as Nigeria, is fair and even sharing of power.”

The Southern and Middle Belt leaders also called on the government to rise up and stop incessant killings in the country.

They also advised the National Assembly to only give consideration to bills that would promote equity, justice, peace and national cohesion instead of issues that will exacerbate conflicts and crises in the country.