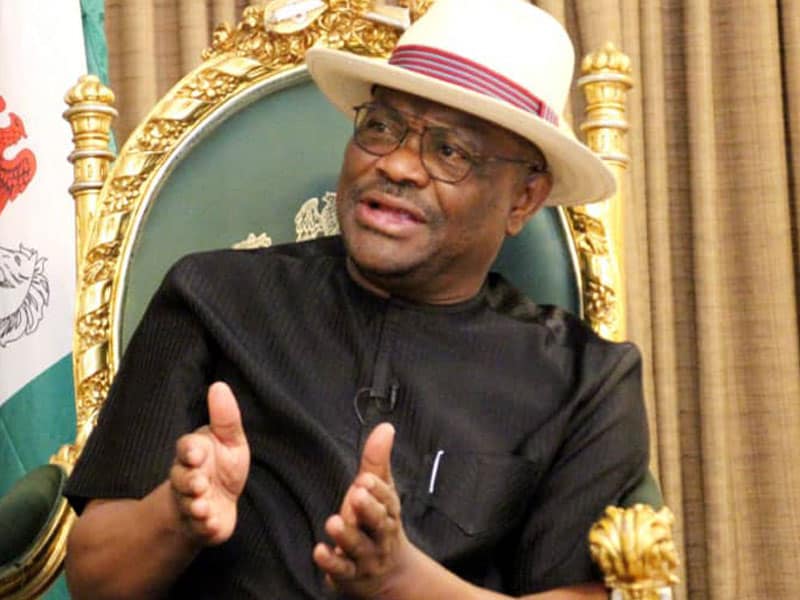 The Governor of Rivers State, Nyesom Wike has urged President Muhammadu Buhari to end the killings of Nigerians by Boko Haram and bandits.

In a statement by his media aide, Kelvin Ebiri, Wike said that Buhari should redouble efforts in fulfilling his cardinal electoral promise of securing the country.

He spoke during the 2022 Armed Forces Remembrance Day Ceremony in Port Harcourt on Saturday.

According to Governor Wike, Nigeria is at a crossroads and everyone is wary about the prolonged Boko Haram insurgency in parts of the country.

According to the governor, there is also the unbridled killings by the bandits and the increasing insecurity in most parts of the country with members of the armed forces made to pay the price of containing these internal wars continuously.

“We acknowledge that some progress has been made in the fight against the insurgents.

“However, the generality of Nigerians believes that the progress made can’t be good enough insofar as Boko haram, its affiliates and the bandits are still active in the North-East, North-West and some other parts of the country, killing, maiming and kidnapping helpless people, including school children, and destroying and displacing hapless communities.

“We, therefore, call on Mr President to redouble his efforts and fulfil his cardinal electoral promise to secure the country and ensure that Nigerians feel safe and remain safe and secure wherever they are in their own country.”

Governor Wike pointed to the need for the Federal Government to take as a top priority the equipping of the nation’s armed forces appropriately.

This, he noted, will motivate men and officers of the military to be well poised to accomplish the noble task of securing the country and ensure that Nigerians feel safe within their various communities.

“We also count on our armed forces to quickly end the raging insurgency and restore peace and hope to all our distressed people and communities who bear the physical, emotional and psychological scars of war and destruction.”

Speaking further,  Governor Wike stated that officers and men of the armed forces are enduring symbols of national unity.

He said Nigerians are proud of them for their principled loyalty to the nation, including their capacity and commitment to defend Nigeria’s territorial integrity, democracy and constitutional freedoms of the citizenry.

“It is also significant to appreciate that, for several families across the nation and communities, today’s remembrance ceremony is a very painful reminder of the loved ones that they lost years, months and even barely weeks ago.

“Perhaps, granting consent for a loved one to enlist in the armed forces knowing that he or she may die in the service, remains one of the toughest decisions any parent, guardian or spouse can make.

“But they did and gave their loved ones to the service of the nation; for the love of our nation; and for the peace and security of their people.

“What they did is, therefore, a great and inspiring lesson in courage and selflessness, for which we owe them all the possible debt of gratitude, respect and honour.”

Governor Wike stated that Nigeria has been at war for over ten years and that has kept the armed forces seriously engaged in offensive combat against terrorist groups like Boko Haram, the Islamic State of West Africa Province, and bandits.

These terrorist groups, Governor Wike remarked, are fanatically bent on destroying Nigeria in vain pursuit of their devilish social, economic and religious agendas.

Governor Wike said,  in all these wars and violent conflicts, whether within or outside the nation’s shores, members of the Nigerian armed forces are and have been the primary victims.

“While most survived to tell their stories about the horrors of war and conflicts; some inevitably paid the ultimate price, while some others survived with horrific bodily wounds and scare.”

Governor Wike, therefore, pledged that the Rivers State Government would continue to identify with them and support their families to cushion their pains. He donated N50 million as a support fund that will help widows of the fallen heroes to have something to do to eke a living