Kanu’s American Lawyer writes US over detention by Nigerian govt 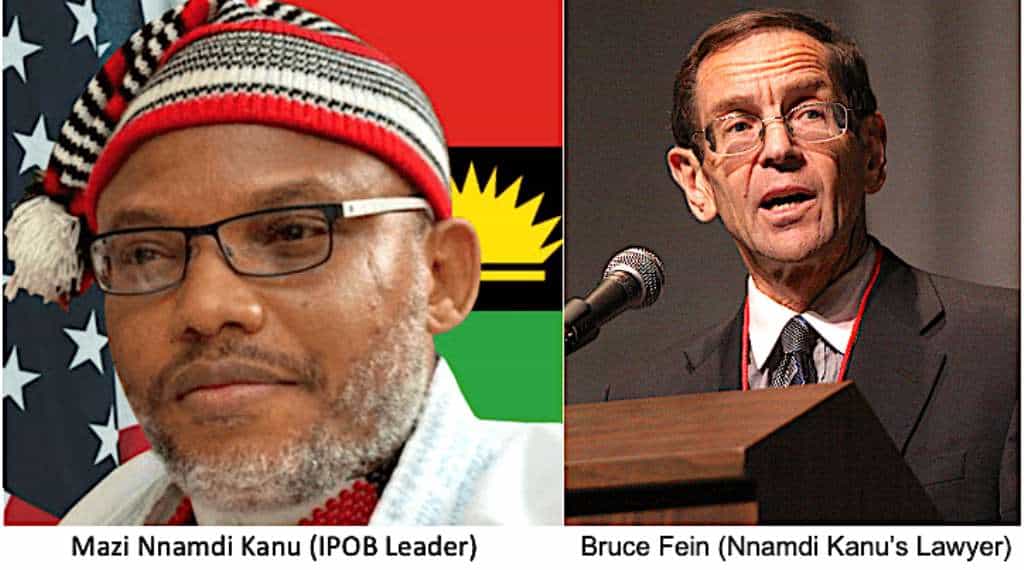 American lawyer, Bruce Fein, has written to the Secretary of State for Foreign, Commonwealth, and Development Affairs, Elizabeth Truss, over the arbitrary detention of the leader of the Indigenous People of Biafra, Nnamdi Kanu, by the Nigerian government.

Fein solicited Truss’ influence to wade into Kanu’s matter because he is also a British citizen.

The lawyer’s letter is titled, “RE: Kidnapping, Torture, and Extraordinary Rendition of United Kingdom Citizen Nnamdi Kanu by the Federal Government of Nigeria, Indefinite Arbitrary Detention, and Pending Political Charges.”

The contents read, “Nnamdi Kanu is a citizen of the United Kingdom. We, the undersigned, are Mr. Kanu’s international lawyer and spokesman, and wife, respectively.

“Mr. Kanu was kidnapped and tortured in Kenya last June and subjected to extraordinary rendition to Abuja, Nigeria, by the Federal Government of Nigeria. There, he has been arbitrarily and indefinitely held in solitary confinement without access to necessary medical care or counsel of his choice and subject to continuing torture in violation of international law and covenants.

“They include, among other things, the Convention Against Torture and the International Covenant on Civil and Political Rights to which Nigeria is a signatory, and Article 36 of the Vienna Convention on Consular Relations.

“At present, the United Kingdom has refrained from openly interceding with Nigerian authorities to protest the flagrant, ongoing, lawless, maltreatment of one of its citizens.

“That inactivity compares unfavorably with the UK’s reaction in 1984 to the joint Nigerian Israeli kidnapping in London and attempted extraordinary rendition of former Nigerian Minister of Transportation Umaru Dikko. A Nigerian and three Israelis received prison sentences. Diplomatic relations with Nigeria were severed for two years. All over the mistreatment of a notorious Nigerian embezzler of government funds.

“It also seems noteworthy that the United Kingdom’s 2007 Intelligence and Security Committee Report on Renditions and the Government responses agree on the illegality of extraordinary rendition and the Government’s duty categorically to steer clear of complicity.

“Juxtapose those cases with Nnamdi Kanu’s.  He is a UK citizen.  His ongoing indefinite illegal detention by the Federal Government of Nigeria rests on Mr. Kanu’s legally protected broadcasts from London on Radio Biafra as recognized by five human rights experts of the United Nations Human Rights Council. These distinctions make a much stronger case for the United Kingdom to intercede on his behalf against the FRN’s extraordinary rendition in violation of international law compared with Umaru Dikko.

“We are respectfully requesting an opportunity to meet with your office at your earliest convenience to explore measures that might be undertaken to end Mr. Kanu’s transparently unlawful detention, prosecution, and torture by the Federal Government of Nigeria, a British Commonwealth country. One option would be to file an amicus curiae brief with the Court presiding over Mr. Kanu’s pending prosecution. Another would be to protest Nigeria’s violation of the United Kingdom’s rights under Article 36 of the Vienna Convention on Consular Relations.”