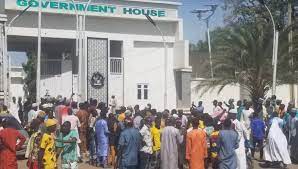 Residents of Nahuche Community in the Bungudu local government area of Zamfara state have taken to the streets to protest against the rate of bandits’ killings and kidnappings in parts of the state.

The protesters on Sunday expressed their anger over the incessant attacks on their community by suspected bandits.

The protesters, who carried placards with various inscriptions besieged the entrance of Zamfara State Government House, Gusau, insisting that they had lost prominent personalities in their communities, including one Alh. Hadi Baban Geme to a reckless armed kidnapper even after payment of N35million as a ransom.

Read Also: 2023: My victory is certain with the masses, Tinubu says

They also claimed that the people of the Nahuche community had paid money worth over N200million as ransoms to the kidnappers, and yet, were not allowed to enjoy peace.

After the demonstration, a former chairman of Bungudu local government, Alhaji Musa Manager Nahuche, told journalists that people in the town no longer slept, saying, “many people were kidnapped from the village last Saturday and are still in captivity.”

He further said many people of the community had been with the kidnappers for a long time adding that on Saturday another set of people had been kidnapped.