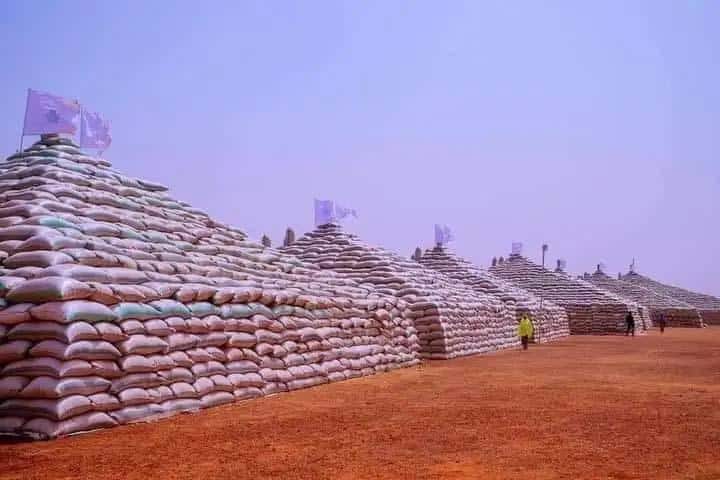 The Peoples Democratic Party has mocked President Muhammadu Buhari and his All Progressives Congress government for allegedly “staging another shameless media stunt to again beguile Nigerians ahead of 2023 elections with the unveiling of bogus rice pyramids in Abuja, which are now known as ‘pyramids of lies’.”

President Buhari had on Tuesday launched rice pyramids in Abuja.

But the PDP, in a statement on Tuesday, which was issued by its spokesman, Debo Ologunagba, described the rice pyramids as fake.

The statement read, “Nigerians are already aware and the pictures abound of how the APC and its government ‘create’ fake pyramids of rice with sandbags and re-bagged rice stacked on pyramid-shaped wooden structures as busted in an APC-controlled state in the Southwest in 2018.

“Of course, there is nothing to celebrate in the APC pyramid of lies in Abuja. It is rather shameful that APC leaders are again ridiculing President Muhammadu Buhari by making him unveil pyramids of allegedly imported foreign rice which are re-bagged as locally produced, just to create an impression of a boost in local production under his watch.

“If indeed, there is a boost in a local production of rice as the APC wants Nigerians to believe, how come the price of rice has not come down but continues to soar from about N8,000 per bag which the PDP handed over to the APC in 2015 to about N30,000 per bag today?

“It is on record that the PDP turned the Waterland of various states of our nation into huge rice production hubs with farms and mills springing up across the country, leading to a boost in local production, a drastic drop in imports and the celebrated affordable prices of food products under the PDP administration.

“Painfully, the APC, with its incompetence, counter-productive policies and incurable corruption reversed all the gains made by the PDP in the agricultural sector and triggered a decline in production which resulted in the high cost of food in our country today.

“Nigerians can recall how APC-led administration failed to protect our farmers and particularly how it blamed over 40 rice farmers killed by terrorists in Borno state instead of going after their assailants.”

The statement further stated, “The APC pyramids of lies are therefore nothing but huge signposts of their failures and irredeemable proclivity for lies, deception, beguilement and fake performance claims even in the face of unbearable high costs of food, 22.95 per cent food inflation rate and our nation’s ranking as 98th out of 107 in Global Hunger Index.

“It is clear that with the 2023 elections in sight, the APC is desperate in pushing its stock-in-trade, the pyramid of lies, propaganda, deceit and bogus claims with which they stole power in 2015.

“What the APC has not realized is that 2023 is not 2015. Nigerians have seen through APC deceits and not even these ‘pyramids of lies’ can help the APC in 2023.”