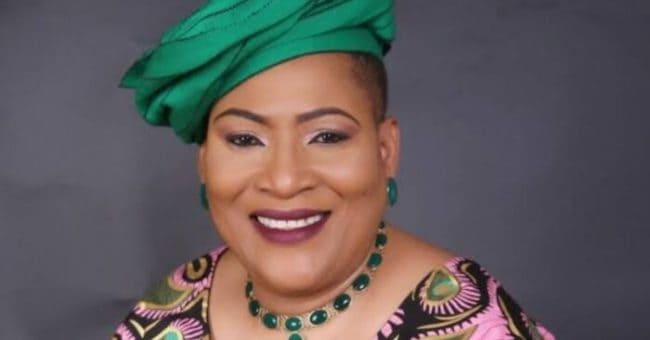 Murtala Ajaka, Deputy National Publicity Secretary of the ruling All Progressives Congress, termed Kemi Nelson’s death as a “huge blow” to the party on Sunday.

Nelson, a party chieftain in Lagos and an associate of APC Presidential Candidate Asiwaju Bola Tinubu, died on Sunday at the age of 66, according to reports.

Many Lagos APC members, particularly at the grassroots level, were taken aback by the abrupt death of the former executive director of the Nigeria Social Insurance Trust Fund.

Gboyega Akosile, Chief Press Secretary to Lagos State Governor Babajide Sanwo-Olu, paid tribute to the late Amazon in a tweet on Sunday, only hours after her death was confirmed.

He said, “We lost a dear soul to the cold hands of death earlier today. May the soul of the late Chief Mrs. Kemi Nelson, former Southwest Women Leader of the @OfficialAPCNg,” Akosule tweeted on Sunday. “Rest in Peace and may God grant her immediate family, friends and associates the fortitude to bear this loss.” The national secretariat of the APC also released a statement to newsmen in Abuja on Sunday. The statement, which was signed by Deputy National Publicity Secretary, Murtala Ajaka, described the late Nelson as an amiable personality, whose death came as a big loss to the APC family.

Ajaka further added that the deceased was a generous politician who was loyal and dedicated to the APC as the ruling party.  “Chief Nelson advocated for unity and was in the forefront of championing campaigns that benefited the lives of APC members and the populace,” the statement said in part. She never abdicated any responsibilities. Her contributions to the victory of the APC in Lagos state and Nigeria are immeasurable.”  “From 1999 to 2003, she served as the Lagos State Commissioner for Women Affairs and Poverty Alleviation during the tenure of Bola Ahmed Tinubu, and she has served as the Women Leader of the Lagos State Chapter of the APC and was later made the South West Women Leader of the APC.”

She was the only female serving member of the Lagos State Governor’s Advisory Council (GAC).” “Nelson was a remarkable woman that devoted her life to women’s grassroots mobilization, protecting the cause of women, and encouraging women active participation in politics and setting of goals.” “The late women leader was a tireless advocate of women and youth emancipation. She stood for all those in the world of politics who are unable to realize their potential. “In all situations, whether on the public stage or away from the cameras, she has passion for justice, and her deep desire for a better, fairer world for women in politics shone through, and by her attitude. “She has proven it beyond doubt that women could play a great role in governance and can make a difference. “Her tireless efforts earned her the APC Women Leader position, not just in Lagos state but the entire South-west. By that, the respect of thousands of women politicians across the states who were inspired by her commitment to party politics, democracy, women’s empowerment and eradication of poverty among women defined her person.”