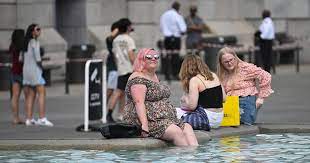 After the United Kingdom’s warmest night on record, the Meteorological Office said 40.2 degrees Celsius had been provisionally recorded by lunchtime at Heathrow Airport, in west London, taking the country into uncharted territory.

Britain’s previous all-time temperature record of 38.7 degrees Celsius, set in Cambridge in eastern England in 2019, had already been smashed on Tuesday.

“For the first time ever, 40 Celsius has provisionally been exceeded in the UK,” the Met Office meteorological agency said, warning “temperatures are still climbing in many places.”

Experts blame climate change for the latest heatwave and note the more frequent extreme weather will only worsen in years to come.

The high temperatures have triggered an unprecedented red alert for extreme heat in much of England, where some rail lines were closed as a precaution and schools shuttered in some areas.

But with road surfaces and runways melting and rails buckling, the Transport Secretary, Grant Shapps, conceded much of Britain’s infrastructure “is just not built for this temperature.”

Tim Wainwright, chief executive of the charity WaterAid, said the situation should be “the wake-up call the world needs to stop climate change from claiming any more lives”.