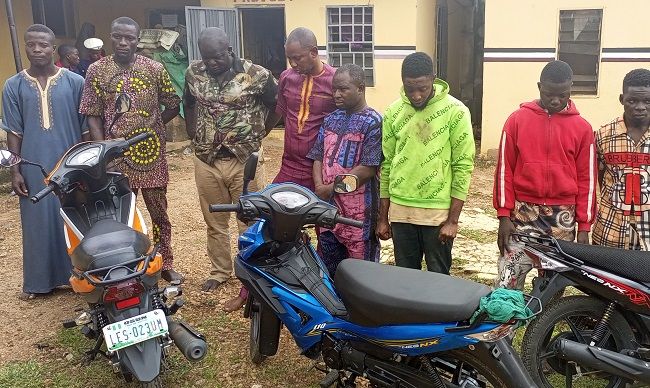 The three suspected thieves are Abifarin Sunday (35) and Taiwo Elijah (26), both of whom live in Oro, in Kwara State’s Irepodun Local Government Area, and Wasiu Ismael (30), who lives in Ilorin.

The suspects, including an ex-convict who had been released from jail a month before, confessed to the crime during an interview with reporters immediately after their arrest.

Olasunkanmi Adebisi, Olarewaju Ismael, Timothy Adeleke, Bashiru Ishola, and Saadu Taiye, who were all detained in connection with the stolen motor motorcycles in Ilorin and Ogbomoso, Oyo State, are among the suspected receivers.

While arraigning the suspects at the Civil Defence headquarters in Ilorin, spokesman Ayeni Olasunkanmi said that two of the equipment were taken in Oro town and one in Ogbomoso.

He stated that the culprits were apprehended after the theft of the motorbikes on July 15, 2022, after operators pursued them and retrieved the three motorcycles.

Ayeni revealed that three additional individuals were being sought in connection with the suspected theft of the motorcycles.

The buyer of the stolen motorcycles, who also lives in Oro, was apprehended.

According to the spokesperson, the suspects sold two stolen motorbikes worth over N1 million to the recipient for N360,000 each.