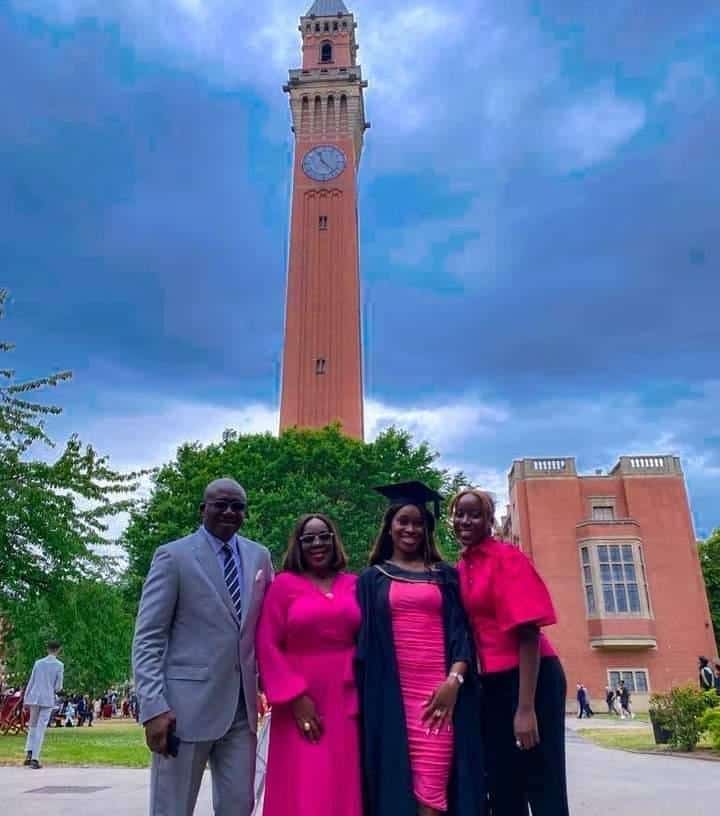 Some Nigerians have lambasted the Secretary to the Delta State government (SSG), Patrick Ukah, after graduation pictures of his daughter, Chukwufumnaya Ukah, surfaced on social media.

Chukwufumnaya graduated from the University of Birmingham, United Kingdom.

In the pictures, the SSG’s daughter was in her graduation gown and flanked by her father, mother and sister.

This is amid the ongoing strike by the Academic Staff Union of Universities (ASUU), which will enter its sixth month in a week’s time.

It was also observed that immediately after the graduation pictures of Ukah’s daughter surfaced on Facebook, Nigerians began to castigate the SSG, saying government officials killed the education sector in Nigeria and then took their children overseas to acquire foreign education, leaving poor children to suffer.

A Nigerian who seemed angry, Fredo Orobome Oniuko, stated on Facebook, “God punish all of them. These their children will be a reproach to them tomorrow. Since they want other people children to suffer.”

Elvis E. Obaro-Akporo, noted that “the new symbol of the Nigerian politician is to advertise their children who studied abroad. That’s nice and the best. That is their marketing and advertising strategies to push them into the political and business arenas. But, supposed the foreign universities are not well administered, would they have sent their children to study there? Next advert.”

Frank White said, “While ASUU is on strike, you stop the common man’s children from accessing education and your own children school abroad. Remember that we are all human beings and remember one day you will stop breathing and you are not taking anything out of this world.”

Ogheneovo Igho Godwin, also noted on Facebook, “And they don’t care if other peoples children go to school. They are rising monsters that will hunt them tomorrow.”, and Doble Ewhese, said, “Na wa o! All the graduates these days are from the other side. What happened to Nigeria school?”

On Monday, the Academic Staff Union of Universities (ASUU) said it has extended its ongoing industrial action by another four weeks to afford the government more time to address all of its demands