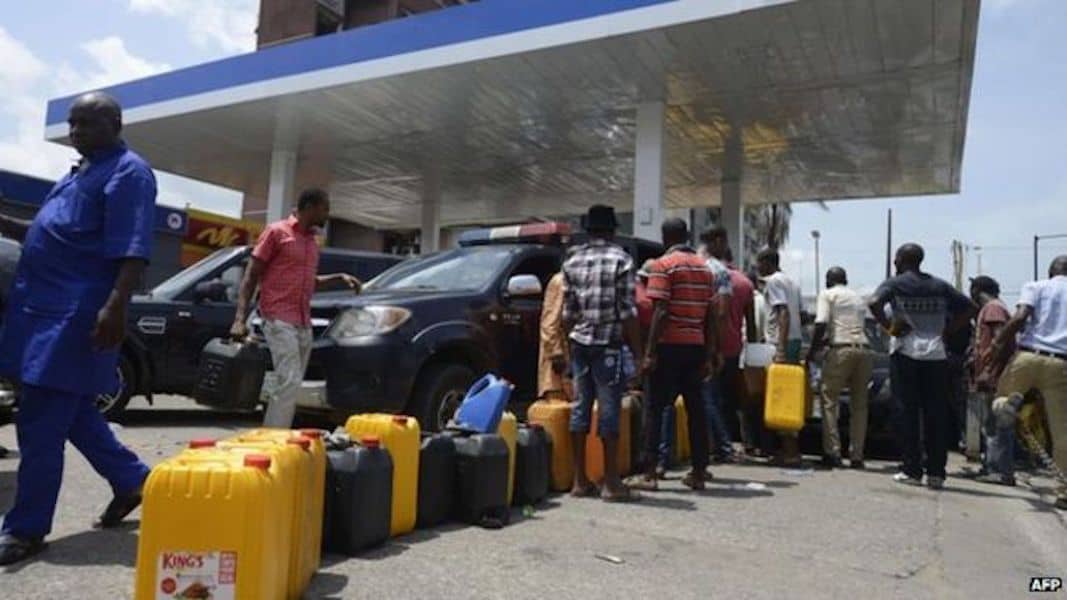 Motorists in Lagos have started experiencing a hard time as long queues resurfaced in Lagos over scarcity of petrol.

The situation was worse in Ikosi-Ketu, Arepo area of New Lagos, Obalende, Maryland and Iju-shaga in Lagos State where some motorists reportedly slept in filling stations.

Commuters lamented the hike in prices of transportation fares in the state on Monday and Tuesday, as petrol was sold between N195 and N200 per litre.

Queues were also reported along the Alausa Secretariat road, as the NNPC (former Oando) was closed to motorists. The same situation was also noticed at Total filling stations in Ojota and Palm Grove.

Stations such as Mobil and Fatgbems along Berger also had long queues and sold at N200/litre.

Heyden filling station at Ilupeju, though sold fuel, had a long queue of vehicles waiting to buy the product.

The Independent Petroleum Marketers Association of Nigeria blamed it on the depots and the increasing difficulty in accessing petroleum products.

National Controller, Operations, IPMAN, Mike Osatuyi, in an interview with Punch said members of the association could not get sufficient products at the depots.

“No fuel. Even when we were able to get small quantity, DAPPMAN sold it to us at N200/N202 per litre. By the time we transport it to our stations, the cost would be around N210/litre,” he said.

He added that getting petrol to members’ filling stations from the depots now cost as much as N200 per litre in some instances.

DAPPMAN’s Chairman, Dame Williams Akpani, had, during a chat with PUNCH also said fuel crises persisted due to logistics challenges.

She said bad roads, resulting in petrol trucks taking one week instead of three days to arrive in Abuja from Lagos, was also responsible.

Akpani added that the bad Abuja road network had led to breakdown of petroleum trucks, which according to her, had resulted in apathy on the part of the drivers in taking products to the federal capital.

Spokesperson for state oil company, the Nigerian National Petroleum Corporation Limited, Garba Deen Mohammed, could not be reached for comment as his phone was switched off as of press time. Messages sent to his phone were not also delivered.

Meanwhile, oil marketers are lamenting what they call the imposition of a 0.5 per cent tax on the gross turnover of the petroleum  by the Finance Act.

The Depot and Petroleum Products Marketers Association’s Executive Secretary, Olufemi Adewole, on the sideline of the maiden edition of the Platforms Africa Continental Forum held on Monday in Lagos, said the tax could shut down businesses and also fuel scarcity crisis if the Federal Government went ahead to implement the new tax regime.

Adewole explained that petroleum marketing firms’ trading margins were too small, and that they would not afford to pay such an amount sustainably.

Adewole said, “Petroleum marketers operate a very low margin, but the turnover is very huge. Unfortunately, the margin does not correspond with the turnover.”

He disclosed that the margins marketers were getting when a litre of fuel sold for N40 was the same they were still getting when it rose to N160 and N200.

According to him, “The Finance Act 2020 says the marketers have to pay 0.5 per cent from their gross turnover by the end of this year.

“It is unimaginable that probably, half of the petroleum marketing firms existing now may go under if the new tax regime is implemented, except the regulator, which is the Nigerian Midstream and Downstream Petroleum Regulatory Authority, approves a new margin for the marketers,” he said.

It would be recalled that oil marketers had recently lamented scarcity of foreign exchange, which, according to them, threatened the importation and distribution of petroleum products across the country.

The fuel queues were coming on the heels of a letter dated October 28, 2022, by the Nigeria Union of Petroleum and Natural Gas Workers to the Lagos State governor, Babajide Sanwo-Olu, over harassment, intimidation and extortion of petroleum tanker drivers by some community youths under the name, Indigenous Unity Forum.

Part of the letter read, “We are deeply constrained to bring to your urgent attention, the unwholesome activities of some criminal elements parading themselves along Lekki Free Trade Zone Road, Eleko Ibeju, Lekki, as community youths under the name of Indigenous Unity Forum, harassing, intimidating, and extorting money from every petroleum truck drivers, who are NUPENG/PTD members plying the road.

“We have no other obligation than to demand that your Excellency, as a matter of urgency, put a final stop to the unwholesome activities of these criminals and similar elements across the state. Otherwise, we would have no other option than to direct our members, for the sake of the safety of their lives and property, to stay off the entire Lagos State until sanity, law and order are restored.”