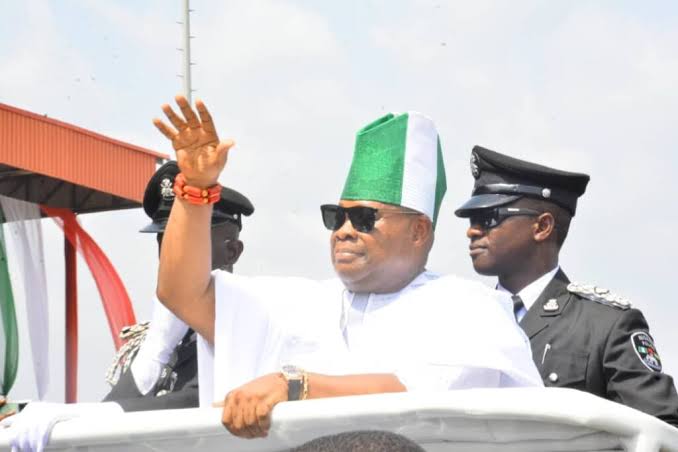 As the sixth executive governor of Osun, Sen. Ademola Adeleke of the Peoples Democratic Party (PDP) took the oath of office on Sunday in Osogbo.

He instructed for the state’s bank accounts in banks and other financial institutions to be immediately frozen.

At the Osogbo City Stadium, Adeleke received the oath of office from Justice Adepele Ojo, the chief judge of Osun.

All appointments, placements, and other significant decisions made by Oyetola’s administration starting on July 17, the day after the state’s governorship election, were to be immediately returned to the status quo ante.

Adeleke stated that a commission will be established to inventory government property and reclaim any that were in the wrong hands.

“All government insignia, correspondences and signages should henceforth reflect Osun State, rather than `State of Osun’, which is unknown to the Nigerian Constitution.

“Under my watch as the governor of Osun, I will boldly correct all past injustices, corrupt acts or policies by any previous administration, which are against the collective interest of our people,’’ Adeleke said.

He promised that all of the instructions he delivered on Sunday will be supported by the necessary executive orders.

Adeleke promised that as governor, he will uphold the aspirations of the Osun people as the state’s chief security officer.

He promised that his administration would approach and address the issues of poverty, illiteracy, sickness, and inadequate infrastructure in the state with a strong sense of urgency, openness, fairness, and innovation.

He said, “I know that as a product of the collective will of you my people, there is a heavy weight of history on my shoulders and I accept the urgency of your expectations.

“The depth of your aspirations and your conviction in me to build a better state will not be misplaced.”

According to Adeleke, all policies that were detrimental to local government administration and growth would be reconsidered in compliance with the law.

He promised the state’s labor unions that his administration will always be eager to protect workers’ interests and advance their welfare, adding that he would be labor-friendly.

The governor expressed disapproval of what he called the previous administration’s widespread, unsupported employment.

Govs. Godwin Obaseki of Edo, Udom Emmanuel of Akwa Ibom, Ifeanyi Okowa of Delta, Aminu Tambuwal of Kano, and Douye Diri of Bayelsa were among the dignitaries present at the inauguration.

Alhaji Atiku Abubakar, the PDP’s presidential candidate, his wife Titi, Mr. Iyiorcha Ayu, the party’s national chairman, and Mr. Bukola Saraki, the former president of the Senate, were also there.

Others were the Ooni of Ife, Oba Adeyeye Ogunwusi, Ayodele Fayose, Tony Elumelu, and David Adeleke, better known by his stage name Davido.