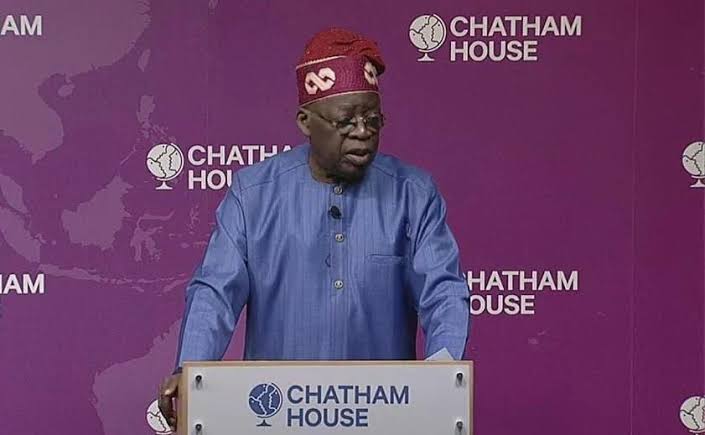 The standard bearer of the All Progressives Congress (APC), Bola Tinubu said he was born on March 29, 1952  “according to family records”.

Controversy has trailed the age and identity of the former governor of Lagos state.

In 2021, Wikipedia locked the page of Tinubu over what it described as “persistent vandalism” because a number of accounts edited his age multiple times.

Fielding questions at Chatham House in the United Kingdom on Monday, Tinubu said his transcript from Chicago State University has 1952 on it.

However, this is contrary to what Reno Omokri, an ex-aide of former President Goodluck Jonathan, claimed he received from the institution upon request.

Speaking on his background, the former governor said “I am Tinubu and Tinubu proper”.

“At the time of birth, I was dated March 29, 1952 in the family record. I didn’t think that day I had determined or decided to be president of the Federal Republic of Nigeria or even go into politics. I have had good exposure in life,” he said.

“My record is consistent in the school — in the university question, they (opposition) confessed that they wasted their money and time. The record is there. The transcript is there showing March 1952.

“I’m not claiming another father. I am Tinubu and Tinubu proper. If they want a DNA, they could as well require one. One of them has been accused of not being a Nigerian citizen; I didn’t touch that area.

“Equally, it remains the same – Deloitte, Chicago State University where I graduated have attested to that. Now, I can announce that I have received my original placement degree certificate from them.

“Deloitte trained me as an accounting firm. Mobil Oil has attested to my record. I got to the pinnacle of my career. In the private sector, who among them can brag about that?

“Yes, you want to wrestle with the pig, you have got to live with the dirt. That is what I am doing. I got into politics knowing fully well that it is muddy water